Ottawa police are seeking help from the public to identify six suspects in a robbery and assault that began in 2015. Went through the Byward Market and ended at the East End.

Police said the robbery began around 3:30 am on June 25, according to a press release. he didn't know

According to police, the victim was in Blackburn. rice field. He suffered non-life-threatening injuries.

The Ottawa Police Robbery Division released videos and images of five of the six suspects on Tuesday. All of the victims are believed to be Middle Eastern men between the ages of 20 and 25, police said. This footage was shot at his 300 block on Dalhousie Street.

Police asked anyone with information about the incident, or who could identify the suspect in photographs or videos, to contact the Robbery Division at extension 613-236-1222. 5116.

Anonymous tips can be sent by calling Crime Stoppers toll-free at 1-800-222-8477 or at crimestoppers.ca 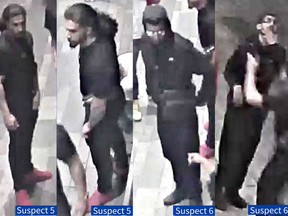 The next issue of the Ottawa Citizen Headline News will arrive in your inbox shortly.

Russia’s Gazprom to ship 41.7 mcm of gas to Europe via Ukraine on Saturday

Under a cloud of belt-tightening, Paris Fashion Week struts on

UCLA hangs on to hand No. 15 Washington first loss

No injuries after more than 12-hour police standoff at Ont. hospital

One dead in collision involving two passenger vehicles and a motorcycle

Turmoil at home swirls around Iran team ahead of World Cup

Orlene expected to be hurricane off Mexico’s Pacific coast

S.Korea says it does not recognize Russia annexation of parts of Ukraine

Robertson continues to give himself every chance of sticking, scores twice in Maple Leafs’ pre-season win

Braves leap into tie for division lead with win over Mets

Teenager stabbed in attack near public pool in Parc-Extension

LA Galaxy has chance to clinch playoff spot against RSL

Attack down Knights on opening night

North Korea fires fourth round of missile tests in one week

With slew of injuries, Lions lay out plan for Seahawks

After 2 years of pandemic adjustment, BC SPCA animal centres returning to regular hours

Letters to The Sun, Oct. 1, 2022: Young people need to learn how to feed themselves affordably

Still no plans to make Day for Truth and Reconciliation a stat holiday in Sask.

Hundreds gather for National Day of Truth and Reconciliation walk

Montana site fouled by copper smelter to get final cleanup

After #FreeBritney, California to limit conservatorships

Toronto lawyer wins the day for dog ousted by condo board