Despite apologies and a promise to work with the neighbourhood, the PNE has opted to continue working with Timbre, the concert promoter responsible for the Breakout Festival that led to a chaotic riot after headliner Lil Baby cancelled an appearance mid-concert Sept. 18.

On Oct. 5, another Timbre concert is scheduled for the PNE Forum featuring King Gizzard and the Lizard Wizard.

The lack of action is eroding public trust as the PNE plans a $70 million revamp of their outdoor amphitheatre that will include year-round concerts, said neighbourhood resident Gwendolyn Margetson.

“It’s disappointing that they would not put their relationship on hold with this promoter until they have engaged the community on the expanded venue. The PNE needs to re-establish trust with the neighbours and invite us into their decision-making process,” said Margetson.

For months leading up to the weekend of the Breakout concert, residents say they had been dealing with excessive noise from an expanded concert season, and raising questions about the kind of acts being booked for outdoor concerts.

“You expect noise from the PNE, it’s the sound of summer,” said Margetson. “Kids screaming on rides, and sometimes music. This is different.”

Margetson, a mother of three, said that during some of the recent concerts the sound of lyrics, including the ‘F’ word and the ‘N’ word were clearly audible from her home.

“You don’t expect that on a school night,” she said.

What the neighbourhood needs is consultation that aligns with the city’s stated values on community engagement, said Margetson. “Please involve us. Is this all for profit?”

For Adrienne Gee and Curtis Rowe, amphitheatre sound levels that “feel like someone is right outside your window with giant speakers” has changed how they feel about where they live.

“The neighbourhood is very much in favour of the PNE. It’s fun,” said Rowe. 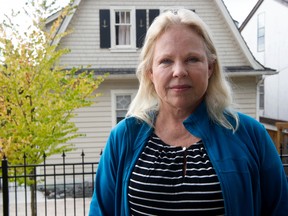 Gwendolyn Margetson in front of her Burnaby home on Sept. 28, three blocks from the PNE. Margetson is unhappy with loud noises from bands playing the PNE amphitheatre. Photo by Mike Bell /Mike Bell/PNG

But the recent concerts are a drastic change. It isn’t just putting their six-year-old to bed while the bass thumps or trying to calm their terrified Icelandic sheepdog Skeye, it’s the anticipation of the next concert.

Rowe said the city has been unhelpful.

“I tried to make the complaint with 311 and they say you have to complain to the PNE. It’s a grey area, if the PNE is their own stand-alone group I don’t see where they are accountable to city or residents.”

That “grey area” of accountability is what has residents worried.

The PNE operates Hastings Park on behalf of the City of Vancouver and is governed by a city council-appointed board of directors. According to spokeswoman Laura Ballance, the group has been owned by the city since 2004 but operates independently.

The PNE receives no government funding and is entirely self-funded through business operations such as the PNE Prize Home Lottery, events and concerts.

In a statement that didn’t address the specifics of recent incidents, the city said the PNE’s community relations department deals directly with all complaints received.

“The city has been working with the PNE to ensure their events are in adherence with the Noise Control Bylaw. Per Section 11, noise on commercial premises, including the PNE, must not exceed a rating of 70 dBC during the daytime and 65 dBC during the nighttime.”

Coun. Lisa Dominato, PNE board chairwoman, said: “I share the concerns of local residents on behalf of the PNE board,” and apologized for the recent concert noise. Dominato said she has asked PNE management to review further events associated with producers of the Breakout Festival.

For Walter Melnyk, apologies aren’t enough. Melnyk has started a petition asking the PNE board and city council to freeze plans for the new amphitheatre and hold meaningful public consultation, make the PNE subject to city noise bylaw enforcement (it’s currently exempt), and have the PNE conduct an independent noise assessment study.

1 pedestrian killed, another injured by vehicle in Brampton, police say

Soccer-Kramaric the bright spot for enigmatic Croatia as Belgium await

BRAUN: What role should police have in Toronto high schools?

Some Republicans criticize Donald Trump for meeting with white supremacist

Best to hold off on downing that first cup of coffee: Report

Not monkey business: A look at Thailand’s unique feast that draws international tourists

Cara Delevingne’s climax to be studied by scientists

Santa Claus Parade kicks off in Regina and Saskatoon

'There is no place to call home': Man who lost wife, son in James Smith stabbing still living in hotel

Pete McMartin: Getting wrapped up in the enigma that is toilet paper

Some Republicans criticize Trump for meeting with white supremacist

Soccer-‘Crazy’ Ziyech shows Morocco what they were missing

Decision time for Slafkovsky: Move him up or mega minutes in Laval? | HI/O Bonus

Landslide kills at least three on Italy’s island of Ischia

A look at the most expensive federal remediation projects in Canada

Canada 1-2 Croatia: Live updates as Canada searching for next goal

Man with life-threatening injuries after collision in Scarborough, police say

Soccer-Uruguay wary of Portugal but hope to repeat 2018 feat

Asian faiths try to save sacred swastika corrupted by Hitler

Asian faiths try to save swastika symbol corrupted by Hitler

Airbnb plans to fix cleaning fees. A look at how that would work