It started with a call at 7:39 a.m. involving a man and the possibilty of a doctor being held hostage inside a medical building on the campus of the Credit Valley Hospital in Mississauga.

Soon after, Peel Police tweeted out that a person was barricaded alone inside the building and negotiations were underway.

Needless to say, this created chaos at the busy intersection along Erin Mills Pkwy., which has Hwy. 403 exits to the south and Eglinton Ave. and the Erin Mills Town Centre to the north. Peel Police closed the roadways down from all directions and brought emergency equipment, vehicles and units into the parking lot of both the hospital and the nextdoor professional building at 2300 Eglinton Ave. W.

Inside that building is where intense drama was unfolding. The standoff was ongoing as of press deadline Friday night. Emergency Task Force officers were deployed in the area and a robot often used in bomb-scare situations was deployed. A drone hovered above.

Perhaps the most important tool used was patience.

Every effort was being made to not have this end with the use of lethal force. Police were tight-lipped about details inside this building and did not address whether or not the suspect was armed.

Very tense situation in Mississauga Friday with ⁦@PeelPolice⁩ patiently trying to sort out a troubling barricade situation in the medical building next to the Credit Valley Hospital. As of 7:45 pm the negotiating was still underway. pic.twitter.com/at845BbIs2

But police were not taking any chances. In the meantime, the hospital operated as usual but with an eerie sense of trouble next door.

Some people suggested the whole scene felt like the Hollywood movie John Q, which was partially filmed in Toronto. 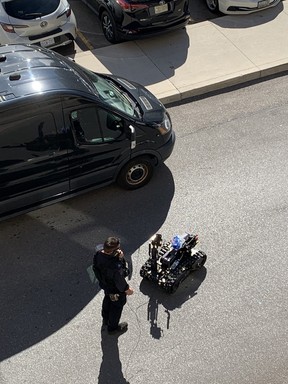 Peel cops deploy a robotic device in the area of Credit Valley Hospital on Friday, Sept. 30 for a person barricaded inside a medical facility. JOE WARMINGTON/TORONTO SUN

However, this was not a movie. This was real and there were a lot of people concerned about the safety of the barricaded person, the hospital staff and the police officers on the scene. The outcome as of Friday night was unknown.

As sun fell, police were still on standby and negotiating.

Clippers to meet Hornets with stars close to return

Police: 180 dogs and cats removed from home by hazmat team

Part of Dundas Street in London, Ont. to close for 2 weeks

People with stimulant use disorder at high risk for overdose after jail: study

Soccer-France needed a great Mbappe and got him, says Deschamps

Blinken vows US support for Israel despite unease over govt

As Musk is learning, content moderation is a messy job

BOX OFFICE: ‘Wakanda Forever’ is No. 1 for 4th straight weekend

Trump rebuked for call to suspend Constitution over election

Education workers vote on tentative agreement to be announced Monday

Train and vehicle collide outside Saskatoon

Food delivery robots have hit Canadian sidewalks — but there are roadblocks