Prior to the feature film Soft, White Rock actor Matteus Lunot’s only two onscreen acting credits came from gigs for Disney and Hallmark.

As it turns out, Soft couldn’t be further from the happiest place on earth or a greeting card as it follows three queer adolescent kids running the summer streets of Toronto in a swirl of teen turbulence, punctuated by harsh realities.

Fresh off a well-reviewed turn at TIFF, Soft is one of the 237 films from 75 countries that make up this year’s Vancouver International Film Festival (VIFF).

In the film, Lunot is front and centre as Julien, a tough as nails, troubled gay kid who pushes away the pain of abandonment with the bravado of a bullfighter.

Julien is joined in heavy-handed hijinks — they shop lift, swill beer on the train and lip off club bouncers — by another gay boy Otis (Harlow Joy) and trans girl Tony (Zion Matheson).

“Joseph Amenta has helmed a first feature punctuated by instances of wild abandon and aching emotion,” said VIFF programming director Curtis Woloschuk. “The young actors’ performances are remarkable, as the trio nimbly navigate their characters’ relationships with their families (both biological and found), communities, and one another. And Matteus Lunot is an absolute revelation: a ferocious, magnetic presence from his first scene.” 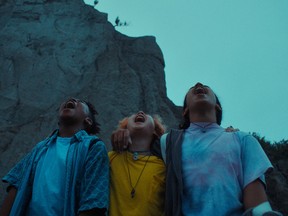 When we first meet Julien, he is like a firecracker going off, but as his journey gets deeper and darker he becomes smaller, more reserved, and reflective. Lunot handles the complexity of Julien with care and a deftness well beyond his minimal experience.

“It was hard, acting all tough and stuff,” said Lunot, whose castmates had even less experience on film.

“We knew when we were casting the film that we needed to find three unicorns, but we also needed to find our lead, who was capable of the duality of being free, bombastic and powerful and sometimes a bit of shit, but also could showcase vulnerability and reflection,” said Amenta.

Julien is a gay boy who likes feminine clothes and has bright pink hair he holds back off his face with colourful clips. Lunot is straight.

“This was disclosed to us when he was auditioning for the movie so this is something we as parents had a discussion with Matteus, whether or not he would be comfortable playing a role like that. His answer was he is an actor,” said Lunot’s mother Lola Opacic Lunot. “We wanted to support him. We wanted him to be comfortable. You worry if the movie does well is he going to be teased at school?

“But he’s quite confidant and he didn’t care, so he had our full support.”

Opacic Lunot is proud that her son decided to go forward with the role. As a social worker who works in mental health, she saw the importance of the film’s normalizing approach.

“We need kids to be able to look up to other people to watch movies to see themselves to identify as regular citizens,” Opacic Lunot. “We have to stop separating and hating.”

“In the film we’re not different. It’s not mainly on us being LGBTQ. I think it is about being a kid and being who we are,” added Lunot, who attends Earl Marriott Secondary School.

That sentiment is what makes this beautifully shot film so relatable. It’s first and foremost a story about kids who love each other, who happen to be sharing a formative time. 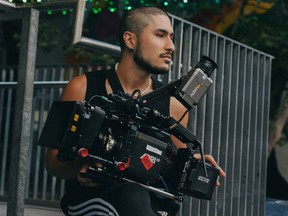 Toronto director/writer Joseph Amenta’s first feature film Soft is one of the 35 Canadian feature films at this year’s Vancouver International Film Festival. The festival is on until Oct. 9. jpg

The cast got to see the film for the first time at TIFF.

“I was dazed, kind of relieved,” said Lunot. “It was cool. But I don’t think I processed it that well. I’ll go to the Vancouver Film Festival, and I think I will be able process what is happening.”

“It’s very interesting to see your own child on a big screen. We watched Matteus in a Christmas movie. We had a family night with the Christmas movie (Hallmark’s 2021 film The Christmas Contest) that was fun. This was completely different,” said Opacic Lunot. “I am looking forward to seeing the movie again because it was almost overwhelming. I was trying to hold back tears the whole time.”

While talk of film festival triumphs and new-found fame is exciting and “pretty cool,” Lunot’s parents are not going to let the bright lights and red carpets of big screen success shift focus away from regular family life and being a kid.

“We try to keep him grounded,” Opacic Lunot. “As soon as we came back from Toronto, he had math tutoring to kind of help to bring it down a little bit. He’s got to do homework. He’s got to do chores. He plays hockey. It’s just back to regular life.”

Suspected vandals leave thousands in the dark in North Carolina

Ukrainians in Kherson wait for loved ones to cross frontline river

'I am not a criminal': Carey Price takes aim at federal firearms bill

Fiance of U.S. citizen detained in UAE fears he will be extradited to Egypt

SIMMONS SUNDAY: Leafs Mitch Marner separates himself from the crowd

Woman with life-threatening injuries after stabbing at Oshawa bar: police

Stripping former senators of 'honourable' title could be an unprecedented move

Man dies in burning vehicle after collision in R.D.P.

The health system is bad now. It’s going to get a lot worse — and here’s why

In Mexico, endangered monarch butterflies inspire hopes of a comeback

Why is it taking so long for Ukraine to join NATO? Experts weigh in

Soccer-Teams focused on World Cup, not politics, had easier passage to last 16 – Wenger

Ottawa weather: Saturday's winds over; chance of flurries on Sunday ahead of a warmer week

Gunmen in Nigeria kill a dozen people, abduct others from mosque

Posted: What to eat on Mars

Feds 'not going to waste a lot of time' on Alberta sovereignty bill debate: LeBlanc

Soccer-Familiar U.S. shortcomings exposed but best yet to come

Love it but leave it: International PhD students call for changes to let them stay in N.L.

If these snowmen could talk: The great snowpeople of history

André Pratte: Deteriorating relations with China are not in our national interest

Montreal weather: Much calmer with plenty of sunshine

ASK AMY: In-law’s contact with the ex rattles the family

Fitness: Holiday gifts for the active people in your life

This N.B. ghost town was the site of a famous axe murder that changed Canadian law

This N.B. ghost town was the site of a famous axe murder case that changed Canadian law

Letters: Serenity now? The most telling comment from the Emergencies Act inquiry

Chinese immigration to Canada record high from 2015, as some flee zero-COVID strategy

‘There is no future’: Lebanon’s new poor face long-term stagnation

Why better tips could mean faster delivery when ordering from apps

Kelp is disappearing from parts of the West Coast. These scientists are trying to save it

What is COP15? Why it matters and what's at stake at the Montreal summit

Despite the protests, celebrities have their reasons for appearing at the World Cup

Do your food deliveries take forever to arrive? You may be a lousy tipper

She was kidnapped from her Mumbai school in 2013. 9 years later, Pooja is home