Will Smith says he will “completely understand” if audiences choose not to watch his upcoming slave drama, Emancipation, following his attack on comedian Chris Rock at the Academy Awards earlier this year.

“I completely understand that, if someone is not ready, I would absolutely respect that and allow them their space to not be ready,” Smith told Fox DC reporter Kevin McCarthy. “My deepest concern is my team – (director) Antoine (Fuqua) has done what I think is the greatest work of his entire career. The people on this team have done some of the best work of their entire careers, and my deepest hope is my actions don’t penalize my team. At this point, that’s what I’m working for.”

"I completely understand that if...someone is not ready, I would absolutely respect that and allow them their space to not be ready...My deepest hope is that my actions don't penalize my team."

Will Smith on audiences who aren't ready to watch his films after Oscars. #GoodDayDC pic.twitter.com/2fc3XaXbMa

Emancipation is Smith’s first new film since he slapped Rock for making a joke about his wife Jada Pinkett Smith’s hair during the broadcast, comparing her look to actress Demi Moore’s buzz cut in G.I. Jane. It was unclear whether Rock was aware that Jada suffers from alopecia, a condition that causes hair loss.

In response to the assault, the Academy of Motion Picture Arts and Sciences announced it was banning Smith from attending any Academy events, including the Academy Awards, for a period of 10 years.

“I accept and respect the Academy’s decision,” Smith of their decision, before retreating from the public eye. 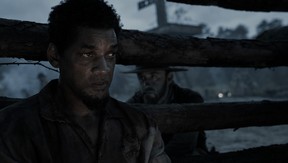 Will Smith and Ben Foster in “Emancipation,” premiering Dec. 9, 2022 on Apple TV+. Photo by Apple TV+

In July, Smith took to Facebook to answer fan questions.

“It’s been a minute … Over the last few months, I’ve been doing a lot of thinking and personal work,” Smith captioned the video. “You asked a lot of fair questions that I wanted to take some time to answer.”

When Smith was asked why he didn’t apologize to Rock during his Best Actor acceptance speech, Smith said he was “fogged out.”

“It’s all fuzzy. I’ve reached out to Chris and the message that came back is that he’s not ready to talk, and when he is he will reach out,” Smith said. “So I will say to you, Chris, I apologize to you. My behaviour was unacceptable, and I’m here whenever you’re ready to talk.”

Set to be released by Apple next month, Emancipation follows an escaped slave (Smith) as he tries to evade cold-blooded hunters and the unforgiving swamps of Louisiana as he journeys towards freedom. The film is inspired by the gruesome 1863 photos of “Whipped Peter,” which helped lead to the growing public opposition to slavery.

“I’m hoping that the material – the power of the film, the timeliness of the story – I’m hoping that the good that can be done would open people’s hearts at a minimum to see and recognize and support the incredible artists in and around this film,” Smith said.

No. 9 UCLA cruises past Washington State

LeBron James returns to Los Angeles with history in his grasp

Host Duke gets the better of North Carolina in tight battle

No. 2 Tennessee outlasts No. 25 Auburn in defensive tussle

Dozens of wildfires torch forests in Chile, death toll at 22

No. 16 Xavier keeps pace atop Big East with rout of St. John’s

Ukraine’s Zelenskiy says situation at the front getting tougher

No. 10 Texas emerges with win from tight battle at No. 7 Kansas State

Prescott council to debate oath of allegiance to King

Three 20-year-old men arrested after a man, 57, was stabbed and robbed: Winnipeg police

Arkansas gets first road win by holding off South Carolina

Cancer care in Manitoba improving but still more work to do: Experts

Balanced attack gets No. 23 Miami past No. 20 Clemson