Ahead of the International Holocaust Remembrance Day, People of the Pod delves into anti-Semitism in France and takes a field trip to the New York Museum of Jewish Heritage.

The American Jewish Committee (AJC) released a new survey this week which asked French Jews — and non-Jews — about their perceptions of and experiences with anti-Semitism in France. 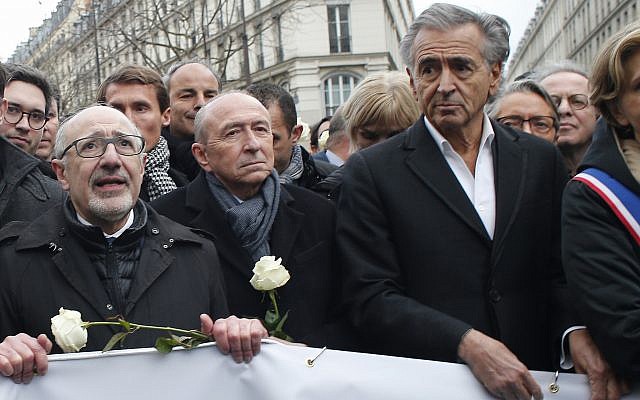 CRIF President (Representative Council of Jewish Institutions in France) Francis Kalifat, left, French interior minister Gerard Collomb, center, and French philosopher and author Bernard-Henri Levy attend a silent march to honor an 85-year-old woman who escaped the Nazis 76 years ago but was stabbed to death last week in her Paris apartment, apparently targeted because she was Jewish, and to denounce racism, in Paris, France, March 28, 2018. (AP Photo/Thibault Camus)

French Jews attempt to hide their Judaism, said Rodan-Benzaquen, with up to a quarter withholding the information of their religious affiliation at work. Others place their religious symbols, such as mezuzot that are traditionally on the outside of homes, inside their doorposts so their homes will not be marked as Jewish. Some 50% of French Jews have already considered leaving France for a different country, she said.

The AJC survey appeared as headlines in mainstream French media, said AJC Europe Director Rodan-Benzaquen, who added it was the top story in France for 48 hours. The survey, she said, “comes at a time when there is growing understanding of the fact that anti-Semitism is a symptom of a larger problem.” She calls for a “zero-tolerance” policy in which even the smallest acts of verbal anti-Semitism will be called out “right from the beginning, whenever you see something happening.”

Next, co-host Manya Brachear-Pashma visited the Museum of Jewish Heritage – A Living Memorial to the Holocaust to tour its current exhibit, “Auschwitz: Not Long Ago, Not Far Away.” The museum recently decided to offer free admission to any New York City public school student and up to three family members in response to the uptick in anti-Semitic attacks on the streets of Brooklyn.

Brachear-Pashma spoke with Jack Kliger, the president of the museum, about the special exhibit, which opened in May and will close in August. It is the largest collection of Auschwitz artifacts outside of Poland, he said.

Over 25,000 students have seen the exhibit so far, which reflects the museum’s core principle of educating the next generation. Kliger said the current era of rising anti-Semitism is “a learning moment, a teaching moment,” which has echoes of Europe in the 1930s, mentioning the 2017 Charlottesville Unite the Right rally, which for many unmasked the increase of white supremacy in the US. 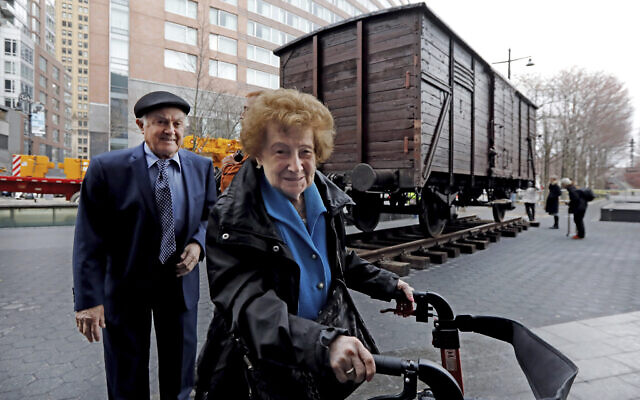 Holocaust survivors Leon Kaner, age 94, and his wife Ray Kaner, age 92, pass a vintage German train car, like those used to transport people to Auschwitz and other death camps, outside the Museum of Jewish Heritage, in New York, March 31, 2019. (AP Photo/Richard Drew)

Joining the weekly Shabbat Table segment, The Times of Israel’s Haviv Rettig Gur gives a very different — and somewhat depressing — take on this week’s grandiose World Holocaust Forum, a diplomatic meet-up that brought dozens of heads of state to Jerusalem. It is well worth a listen.

In addition to People of the Pod, which is produced together with the AJC and looks at current events through a Jewish lens, The Times of Israel released another podcast this week, which featured an exciting Israeli nonprofit initiative called Innovation Africa.

Environment reporter Sue Surkes speaks with Jewish World editor Amanda Borschel-Dan and describes Innovation Africa’s work, which has changed the lives of millions of villagers through its use of solar energy to bring electricity, clean drinking water — and even basic med-tech such as cold vaccine storage — to hundreds of villages across Africa.

Evolution of an American mom in Israel

Who gains and who loses when parties merge

Could Russia go to war with Turkey in Syria?

Conflicting reports on the number of coronavirus deaths in Iran

Labor claims he and Gantz will form minority gov’t backed by Liberman, Arabs

Astronomers discover biggest known explosion in the history of the universe

Israel’s coronavirus cases more than double within a day, from 3 to 7 patients

Killer whale spotted off the coast of Israel

Liberman says may not back anyone for PM, or perhaps just nominate himself

Countdown to fourth elections: 7 things to know for February 28

The Tabernacle’s beauty is hidden, and that’s the point

A Jewish US president? Sanders, Bloomberg vie to break a barrier many don’t see

Coronavirus outbreak "getting bigger" after Nigeria case - WHO

Love in the time of coronavirus: quarantined couple reunited after 2 weeks

Gantz fires adviser heard calling him a ‘threat’ to Israel, says it was ‘ambush’