NEET: Seven from Gujarat make it in top AIR 50

The Medical Council of India (MCI) will soon start the counselling procedure for 15% All India Quota seats. For the rest of the 85 per cent seats, that falls under state quota, counselling will be conducted separately by the concerned authorities on the state level. Over 7 lakh candidates have qualified the competitive examination, out of which 6.3 lakh are from the general category. The exam was conducted on May 6 this year and over 13 lakh candidates had appeared for the same. 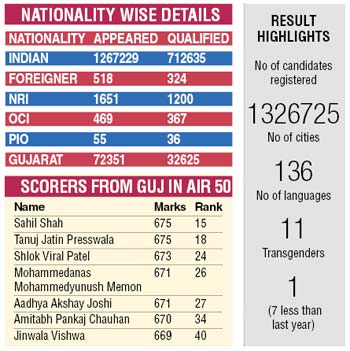 This year, the cut-off for the general category stands at 50 per cent, and 40 per cent for other category candidates. Around, 6,34,987 candidates got marks in the margin of 691 to 119. Other candidates received marks less than 118. A total of 11 candidates were identified using unfair practices in the examination and hence the results have been cancelled and they have been debarred from appearing in the medical entrance examination.

Sahil ShahShah, who hails from Surat, is passionate about English literature. Along with his studies, Shah writes fiction novels regularly for his blog. His parents are dentists, but he refuses it to be the only reason to pursue medicine. He says, “Since class 10, I was quite fascinated with medicine though I have not yet thought about specialisation. While I expected a rank under 100, AIR 15 was a big surprise for me. I do not even have a social media account as I feel it distracts a lot. Stick to basics and study only NCERT. All questions were asked from NCERT, nothing was out of syllabus,” is Sahil’s tip for aspiring students.

Mohammadanas Mohammadyunus MemonFor Memon, scoring AIR 26, was a big surprise. He said, “While I expected to rank in top 100, a rank in top 30 was a total surprise.” Mohammadanas, who hails from Himmatnagar, shifted to Ahmedabad two years ago and would study upto seven hours a day for NEET. He loves watching movies and playing cricket. While he stopped using phone few months before his exams, he continued watching movies to relieve stress. His tip for aspiring candidates is to study and practice every day.

Coronavirus won’t be present after 4 to 6 hours of death: official

Speaker should refrain from commenting against judiciary, says Sabbam Hari

Endosulfan: doctors to be called back to Kasaragod

Naidu yet to recover from election rout: Thammineni

TDB not to lease out its land for cultivation

Evaluation: Exemption for teachers above 55

Now, asymptomatic patients have to be in home quarantine for 17 days

People in a dilemma over performing family functions

Diesel Loco Shed in Vizag comes up with UV-based sanitisers

‘TDP will stand by Amaravati farmers’

'Declared flop and how it turned out to be biggest hit': Manoj Bajpayee celebrates 22 years of 'Satya'