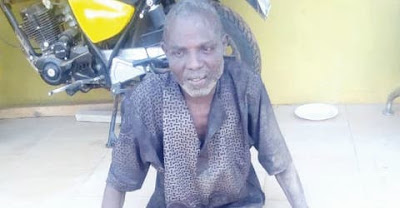 Men of the Ogun State Police Command have arrested a 55-year-old man, Yesiru Salisu, for being in possession of human parts, including four skulls, two hands and three jaws, in Ijebu-Igbo.

The suspect allegedly severed the human parts from a Christian cemetery in Oke-Eri, Ijebu-Ode, on Monday alongside his accomplice, Lekan Bakare, who is on the run.

The Police Public Relations Officer in the state, DSP Abimbola Oyeyemi, disclosed this on Tuesday.

Oyeyemi said the suspect, who is a resident of No. 7 Odenusi Street, Ijebu-Igbo, was arrested on Monday.

The PPRO added that the suspect was arrested following a report lodged at the Ago-Iwoye Division in the Ijebu-North Local Government Area of the state.

He added that the complainant reported that a man was seen with a bag suspected to contain stolen property and when he was challenged, he dropped the bag and ran into the bush.

The statement said, “Upon the report, the DPO Ago-Iwoye, CSP Paul Omiwole, led detectives to the scene, where they opened the bag and discovered that it contained dry human parts.

“Consequently, the bush that the suspect ran into was properly combed and he was subsequently apprehended.

“On interrogation, the suspect confessed to harvesting the human parts from a Christian cemetery in Oke-Eri, Ijebu-Ode together with one Lekan Bakare, who is now at large.”

The PPRO said the Commissioner of Police, Edward Ajogun, had ordered the immediate transfer of the case to state Criminal Investigation and Intelligence Department for further investigation and prosecution.

Oyeyemi added that the CP also directed that the fleeing accomplice should be hunted and brought to justice.

Griezmann has scored 5 goals in the last 4 finals
Messi went mad: he hit his opponent on the head and got his first red card for Barca (753 matches!)
Barcelona screwed up. We did not defend well, no one suggested to each other. Griezmann on 2:3 with Athletic
Messi hit Villalibre on the back of the head and received the first red card in 753 matches in Barca
Conte on 2:0 with Juve: Inter learned to feel the blood and kill the game
Vidal about 2:0 with Juve: Inter beat the best team in Italy. We believe that we can win the Scudetto
Pirlo about 0:2 with Inter: Juve could not have played worse, the team just did not come out on the field
Source https://www.nigerianeye.com/2020/11/55-year-old-caught-with-four-human.html?utm_source=feedburner&utm_medium=feed&utm_campaign=Feed%3A+Nigerianeye+%28NigerianEye%29