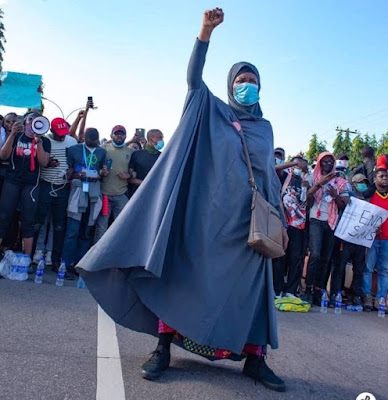 Aisha Yesufu, co-convener of the Bring Back Our Girls (BBOG) campaign, and Uyaiedu Ikpe-Etim, a feminist film-maker, have been named among the BBC’s 100 inspiring and influential women around the world for the year 2020.

Yesufu was a prominent promoter of the protest against police brutality that rocked Nigeria in October 2020.

Ikpe-Etim, on the other hand, is a director and LGBTQ activist who has committed herself to creating stories about marginalised groups in Nigeria.

Her new film, entitled “Ife”,  delved into the world of lesbianism and its representation in Nollywood.

In an interview with CNN earlier in the year, Ikpe-Etim said she is tackling the subject head-on “to create space for queer characters in the country’s prolific movie industry”.

According to the BBC 100 women, this year’s list highlights those who are leading change and making a difference during these turbulent times.

“This year’s list includes Sanna Marin, who leads Finland’s all-female coalition government, Michelle Yeoh, star of the new Avatar and Marvel films and Sarah Gilbert, who heads the Oxford University research into a coronavirus vaccine, as well as Jane Fonda, a climate activist and actress,” it said.

“And in an extraordinary year – when countless women around the world have made sacrifices to help others – one name on the 100 Women list has been left blank as a tribute.”

Some other women on the list are Sarah Al-Amiri, UAE’s minister of advanced technologies; Patrisse Cullors, human rights activist from the US; Jeong Eun-Kyeong, South Korea KDCA commissioner.

How the women are chosen

The BBC’s 100 Women team said it drew up a shortlist based on names gathered s by them and suggested by the BBC’s network of World Service languages teams.

It also said it looked for candidates who have made the headlines or influenced important stories over the past 12 months, as well as those who have inspiring stories to tell, achieved something significant or influenced their societies in ways that will not necessarily make the news.

It said, thereafter, the pool of names was then assessed against this year’s theme — women who led change — and measured for regional representation and due impartiality, before the final names were chosen.

Commenting on the honour, Yesufu said: It is an honour and a humbling experience to be amongst the BBC 100 women. My fellow Nigerians, this is for you! I AM BECAUSE WE ARE! One day we will have a Nation where lives matter and the child of nobody can become somebody without knowing anybody.”

It is an honour and a humbling experience to be amongst @BBC100women. My fellow Nigerians, this is for you! I AM BECAUSE WE ARE!

One day we will have a Nation where lives matter and the child of nobody can become somebody without knowing anybody. https://t.co/TJ7FJLmwdV

Ikpe-Etim expressed her joy for being on the list, saying: “This is definitely the year of the queers. In spite of all the hate, we all just stayed winning. Totally here for it! Invite me to all the queer end of the year parties, we deserve to party!”

Griezmann has scored 5 goals in the last 4 finals
Messi went mad: he hit his opponent on the head and got his first red card for Barca (753 matches!)
Barcelona screwed up. We did not defend well, no one suggested to each other. Griezmann on 2:3 with Athletic
Messi hit Villalibre on the back of the head and received the first red card in 753 matches in Barca
Conte on 2:0 with Juve: Inter learned to feel the blood and kill the game
Vidal about 2:0 with Juve: Inter beat the best team in Italy. We believe that we can win the Scudetto
Pirlo about 0:2 with Inter: Juve could not have played worse, the team just did not come out on the field
Source https://www.nigerianeye.com/2020/11/aisha-yesufu-named-among-bbcs-100-most.html?utm_source=feedburner&utm_medium=feed&utm_campaign=Feed%3A+Nigerianeye+%28NigerianEye%29

2023: Why We Won’t Support Nigerian President Of Igbo Extraction —IPOB