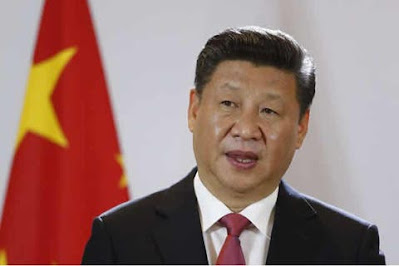 In his telegram, Xi said both countries should “stick to no conflict or confrontation, mutual respect, (and) the spirit of win-win cooperation” in order to promote the “noble cause” of world peace and development.

This comes weeks after Chinese Foreign Ministry spokesman Wang Wenbin told reporters in Beijing that “We have been following the reaction on this US presidential election from both within the United States and from the international community.

Major world leaders had congratulated Biden and Kamala Harris for defeating the Republican candidate but China was one of the few countries including Russia and Mexico that had so far withheld comment, as Trump contested the results.

US-China ties have grown increasingly strained in recent years under the Trump administration and relations are as icy as at any time since formal ties were established four decades ago.

Trump’s four years in the White House have been marked by a costly trade war between the two powers, with Beijing and Washington also sparring over blame for the Covid-19 pandemic and China’s human rights record in Xinjiang and Hong Kong.

It was reported that the Trump government threatened to leave the World Trade Organisation. It also blocked the organisation’s dispute settlement appeal system since last December, insisting that China must move up from the developing economies category.

The US-China trade war started in 2018 when Trump began setting tariffs and other trade barriers on China with the goal of forcing it to make changes to what the US described as “unfair trade practices”.

The trade war has negatively affected both economies and has paralysed some vital activities within the WTO.

Analysts have also opined that the decision of who becomes the next director-general of the world trade body largely rests on the outcome of the US election. The WTO selection committee had postponed the final selection process just before the election. It had adopted Nigeria’s Former Finance Minister, Ngozi Okonjo-Iweala, as consensus candidate but the Trump government opposed the move.

Under his “America First” banner, Trump has portrayed China as the greatest threat to the United States and global democracy.

Juve director: Ronaldo's charisma and character help us. We believe in Pirlo, there are no specific expectations
Ødegaard is close to the rent in Sociedad. Ajax are also Interested in the Real Madrid midfielder
Ronaldo is being unnecessarily criticized. His partners, including Morata, are even worse. Ex-Inter player about the match with Juve
Koeman on Leonardo's words about Messi: When asked if I am Interested in Neymar or Mbappe, I would also say yes
The Pope met with Spezia and congratulated them on their victory over Roma: You won 4:2. In Argentina, we dance the tango, and this is music 2/4
The coach of the Mexican Tigres lit a cigarette during the game. He was suspended for one match
Arsenal approached Real Madrid regarding the lease of Edegra
Source https://www.nigerianeye.com/2020/11/chinas-jinping-congratulates-biden.html?utm_source=feedburner&utm_medium=feed&utm_campaign=Feed%3A+Nigerianeye+%28NigerianEye%29

Buhari: ‘We look forward to Biden’s presidency with great hope’

Ultimatum to herders: SANs back Akeredolu, insist action not unconstitutional

How DStv’s new TVC is inspiring me to come alive

We are not doing COVID-19 vaccination but that of yellow fever, Bauchi agency clarifies

Biden preaches unity in inaugural speech as 46th US President

Osun contracts JAMB to conduct test for its prospective teachers

You failed Americans, shame on you – Piers Morgan to Trump

We must reject culture in which facts are manipulated, manufactured, says President Biden

Here are the 10 Nigerian TikTok creators to watch in 2021

APC behind disunity among Nigerians – Lamido

Ondo govt fires back at Presidency, gives condition for herdsmen to stay

APC membership exercise: There will be sanctions for sabotage ― Governor Buni

BREAKING: Joe Biden sworn in as 46th US President

Breaking: Biden sworn in as 46th US president

Brace up for more dividends of democracy in 2021, APC tells Ekiti people