Wilson Inalegwu, former assistant inspector-general of police, says the southern governors should have condemned the attacks on security a... 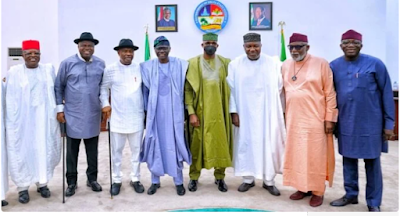 Wilson Inalegwu, former assistant inspector-general of police, says the southern governors should have condemned the attacks on security agencies during their meeting in Asaba, Delta state capital, on Tuesday.

Governors of the 17 southern states had held a meeting to discuss the state of the nation.

Following the meeting, they demanded that President Muhammadu Buhari should be fairer in political appointments, convene a national dialogue, accept the establishment of state police, and support willing states to develop an alternative and modern livestock management system, among other things.

Inalegwu, in reaction, said the governors should have also addressed the attacks on police stations and killing of officers across the country, given that most of the incidents have been in south-east and south-south states.

The former AIG spoke on Sunrise Daily, a Channels Television programme, on Wednesday.

“The meeting that took place yesterday, the communique should have been a strong condemnation of attacks on security forces in the south-south and south-east and any other place for that matter,” he said.

“Because these are officers who are working to keep our communities safe but the communique was silent on that, when these numbers of governor come to meet, they should have addressed the issue, saying we’re not going to allow those who defend our communities, those who prevent crimes in our communities to be discouraged, to be killed. That, I think, should have happen.

“These are officers that are traumatised. They are first respondents in various incidents, whether medical, whether social.

“Also, the numbers of officers killed is significant enough to draw the attention of their excellences, that in that meeting, they have got to comment on it and condemn it in strong terms.”

President of Legion-Dynamo: Khabib was pleasantly surprised by his understanding of football and its development
Messi, Neymar and Suarez will burn at the Copa America. Find out with the help of our test, which Copa team is more suitable for you
Peter Schmeichel: UEFA has offered the Danish national team three options: to finish immediately, at noon the next day, or to count 0:3. Did the players have a choice?
Spain is learning to play without Ramos, Pique, Carvajal and De Gea (and possibly Alba). On the right in defense-a midfielder, in the center-two left-handers
Rhodri: England could field three teams. They are among the obvious favorites of the Euro
Goalkeeper of the national team of Ukraine Buschan about the match with the Netherlands: I do not consider myself a hero
The match between Denmark and Finland could not be played on the same day. The players didn't have to decide that

FRSC cries out as hoodlums attack personnel in Ogun

Ogun: Gov Abiodun under fire for taking photos to Buhari in Abuja

TB Joshua’s spirit visited me after he died – Kuti

No soldier killed in Abia, troops not on revenge mission – Army

JUST IN: Army Unleashes Mayhem On Ohafia Over Death Of Soldiers By Unknown Gunmen

Zidane clashes with Spanish reporter over question on Real Madrid

Why I support Buhari’s ban of Twitter – Ned Nwoko

Bandits Kidnap Family Of Eight, Four Others In Zaria

Hafsat Abiola praises Aregbesola for his role in immortalising MKO

No soldier was killed and troops are not on vengeance mission in Ohiafa, Abia State ― Army

I want to know what happened to me, Eriksen breaks silence

Nigeria and the burden of N33trn debt

Mourinho reveals what he did when Christian Eriksen collapsed

Gbajabiamila is one of Nigeria’s most successful politicians, says Osinbajo

‘Tell The Truth To Those In Power’ — Lalong Challenges Religious Leaders

Traders, others cry as task force demolishes market in FESTAC