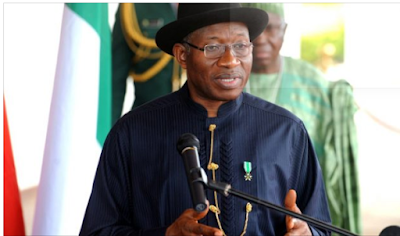 According to INEC chairman, Prof Yakubu Mahmud, the PDP fulfilled the constitutional requirements.

However, reacting to the development, Jonathan urged Bayelsans to be law-abiding, peaceful and embrace the transition in all sincerity, and work together towards a united and prosperous State.


He wrote, “I congratulate His Excellency, Senator Douye Diri who was sworn in today as the 5th Civilian Governor of Bayelsa State, in compliance with the Supreme court verdict of yesterday, 13th February 2020.

“As Governor, the responsibility of building hope and sustaining peace across the State now lies on your shoulders.

“I urge you to always bear in mind that you are the Governor of all Bayelsans and to seize this moment of glory to build bridges of unity by entrenching a culture of love, fairness and justice in our polity.

“Your journey to Creek Haven is a divine one, so I advise you to use the position to do good to humanity and pursue the development of the State in order to write your name in gold.

“You have worked with me before as a commissioner, so I am without doubt that you will live up to the expectations of our people.”

Of South-West and food security

Beware! Coronavirus can lead to more power abuse in Nigeria

Infodemic: a golden chance for the Nigerian media

COVID-19: How soap kills viruses and other infectious micro-organisms

Time to change our governance template

These palliatives won’t do

Premier League to END season due to coronavirus uncertainty

A nation and its unpreparedness

WHO chief urges end to ‘politicisation’ of coronavirus

Buhari, other African leaders stand with WHO chief after Trump attack

COVID-19: Why we are supporting Nigeria ― Pingjian, Chinese Ambassador

COVID-19: Shina Peller Calls Out FG Over Distribution Of Palliatives

Coronavirus: Nigerians advised for stay away from hospital ‘unless critically ill’

Coronavirus: Nigerians advised to stay away from hospital ‘unless critically ill’

Who wins the N150 million prize at ‘Access The Stars’ e-Finale on Saturday?

Treasury House Fire: Could it be what we are thinking? | The #YNaijaCover

Why NDDC failed to procure ventilators for Niger Delta – Pondei

No face mask, No shopping in Shoprite

FG to shut down oil refineries for upgrade — NNPC GMD