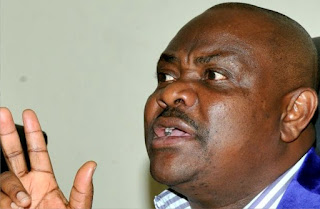 Governor Nyesom Wike on Friday announced a ban on all activities of Igbo secessionist agitator group, the Indigenous People of Biafra, IPOB,  in Rivers State.

The ban follows the indictment of the group by the police in the series of violence that have rocked the Oyigbo Local Government Area and other parts of the State in the wake of the #EndSARS protests since the beginning of the week.

The Governor had on Wednesday declared 24 hours curfew in Oyigbo and other parts of the state to rein in activities of the group.

However, the Rivers State Police Command said the curfew did not deter the group as over 500 of its members attacked and burnt down two of its stations, 15 cars, including an armoured personnel carrier even after the imposition of the curfew.

Violence by the group continued from Thursday till early hours of Friday with reports that many residents of Oyigbo government were forced to flee the area as its members engaged in a gunfight with security operatives.

Many houses were reportedly set ablaze in the gale of violence, while many people were also injured.

While announcing the ban on the organisation on Friday, Governor Wike said the activities of the banned IPOB are not just dangerous to lives and property, but also constitute clear and present threat to the existential interest and aspirations of Rivers State and all her people.

He added that the proscription order on IPOB in Rivers was a reinforcement of the earlier ban of the activities of the group across the nation by the Federal Government.

The Governor added that with the proscription, no form of procession or agitation by the group or any of its affiliates is allowed to take place in Rivers hence forth.

“Security agencies are hereby directed to stop any form of procession or agitation by IPOB in Rivers State or any part thereof and arrest and prosecute any person or group that identifies with the membership or activities of IPOB in the State; Government will issue an executive order to strengthen and ensure the effective enforcement of these measures” he said.

He disclosed that he will be meeting with all leaders of youth groups and community development committees in the State on Monday 26th October 2020 to take holistic measures to counter and stop all IPOB activities in Rivers State;

The governor also declared one Mr. Stanley Mgbere, who wanted for leading members of IPOB to cause the recent violence and destruction of lives and property in Oyigbo.

He said a ransom of N50m will be given to any person with useful information that would lead to arrest and prosecution of Mgbere.

Wike recalled that since IPOB was classified as a terrorist organisation by the Federal High Court and subsequently proscribed in September 2017, the group has carried out intermittent processions in parts of Rivers State, especially in Oyigbo and some notorious suburbs in Port Harcourt Local Government Areas.

According to him, IPOB aim had been to disturb the peace of the State by unleashing violence and destruction on lives and property at will.

He said this evil, wicked and audacious action resulted in the unnecessary loss of scores of lives, including soldiers and police officers, and the destruction of both public and private properties, including police stations, court buildings and business premises.

Wike also claimed that members of the group also visited physical violence on members of some targeted community which, but, for the quick intervention of the State Government and the security agencies, would have resulted in some form of internecine bloodbath in the State.

“Today, IPOB continued with its devilish and destructive activities at Rumukwurushi, Iriebe and Oyigbo in open defiance of the State Government’s curfew on human movements. Security intelligence and surveillance have revealed that IPOB has continued to expand its membership drive, holding meetings regularly, and expanding its logistical base, including the maintenance of illegal detention cells in Emenike and other parts of Diobu, Port Harcourt.”

“As a matter of fact, Oyigbo town has practically become the group’s main operational base in Rivers State, from which they’ve become notorious for launching premeditated violence and terror on the State, businesses and innocent citizens. As a people, we have become very much unsettled by the terrorist acts and endured the continuing irritations, violence, destruction and provocations of IPOB in and against the people of Rivers State.”

The governor noted that as a stranger element with strange political ideology, IPOB has no legal or moral right to invade Rivers State or any part therefore at its behest; to disturb public peace; and subject lives and property to violence or threat of destruction under any guise.

He emphasized that Rivers State’s love, accommodation and hospitality towards all who reside in and do business in the state are being mistaken for weakness by the banned IPOB.

“I wish to appeal to the people of Oyigbo Local Government Area to remain calm and not to take the laws into their hands despite the intense provocation as government has the capacity to deal with the challenge and ensure the safety of lives and property in the Local Government Area. We will soon carry out on the spot inspection and assessment of the destruction they have suffered and take appropriate measures to mitigate the loss and damage caused to lives and property” he said.

Wike expressed his heartfelt sympathies to the families of all those that have either lost their loved ones or suffered damages to their properties from the destructive acts of IPOB in our State.

Marcel Villas-Boas has snapped a record 13-game losing streak in the Champions League. And for the first time I scored in this draw
Queiroz dismissed as coach of the national team of Colombia
Klopp on goalkeeper Kelleher's game with Ajax: Top, top, top, top
Manchester United, Tottenham and Chelsea are Interested in Brighton defender white
Red bull tore up Lokomotiv with a perfect variety of attacks. The stricken Loco didn't know what to do
The Spanish super Cup may not take place in Saudi Arabia, but in Spain
Goals by Zobnin, Kuzyaev and Skopintsev claim the title of best in November
Source https://www.nigerianeye.com/2020/10/governor-wike-bans-ipob-in-rivers-state.html?utm_source=feedburner&utm_medium=feed&utm_campaign=Feed%3A+Nigerianeye+%28NigerianEye%29

‘Free Me’ – Regina Daniels Pens Message To Her Critics

Boko Haram Claims Responsibility For Massacre Of Farmers In Borno

Borno massacre: We have never taken permission from military – Residents to Garba Shehu

Why I named my twins after President Buhari, Al-Makura – Gov Sule

HIV/AIDS prevelance drops to 0.4 in Bauchi

PDP Slams Presidency For Blaming Farmers For Being Killed By Terrorists

Why kolanut is celebrated, venerated in Igboland

[BREAKING] Covid-19: Pfizer vaccine approved for use next week in UK

Northerners Wasted Their Votes On Buhari In 2015, 2019, Northern Groups Say

STATE OF THE NATION: Nigeria must change course to avoid danger — Makinde

INEC: Yakubu gets Senate’s nod for another tenure

A review of Dr Okey Anugueyiagu’s: Biafra, the horrors of war

Shakhtar vs Real Madrid: Zidane speaks on resigning after failing to qualify

Champions League: All the teams that have qualified for knockout stages

2023: Zoning must be respected, Amaechi, others back Fashola

Umahi’s defection to APC has no value — Obi

Abdulraheed Maina must not go scot-free