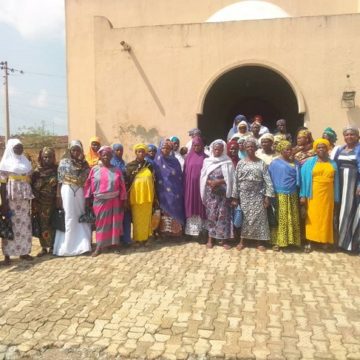 Residents of Erin Ile community in the Oyun Local Government Area of Kwara State have received empowerment grants from a philanthropic group to improve their socio-economic wellbeing.

The beneficiaries, made up of market women, farmers, religious leaders, and members of the Fulani community in the area received cash worth several thousands of naira to boost their businesses.

The rural dwellers, who thronged the venue of the programme to receive the financial package, said that the day would remain evergreen in their mind.

The beneficiaries and different groups expressed their joy, as many of them explained that the goodies came at the appropriate time when people were passing through hard times.

Some of the people who spoke with journalists praised Olorundare for his philanthropic gesture, describing him as a great giver who had put smiles on their faces through numerous empowerment programmes.

While thanking the donor, the Iyalode of Erin-lle, Alhaja Sariyu Raji, implored the beneficiaries to use the money judiciously.

The PDP chairman, Erin-lle, Alhaji Murtala Bello, said that the money given to the market women would not only boost their businesses but alleviate their sufferings.

Also, APC chairman, Erin-lle, Joshua Oyeniyi, noted that the donor has put a smile on the faces of the people, promising that the people would use the money judiciously.

Another beneficiary, Mrs Hannah Adegoke, urged well-meaning Nigerians to emulate the good deeds of the donor.

They prayed Almighty God to bestow wisdom, knowledge and understanding on the donor.

The facilitator of the empowerment programme, Isaac Adewale Olorundare Foundation (lAOF), said that no fewer than 80 people have benefitted from the scheme amounting to millions of naira.

Olorundare, who was represented by the coordinator lAOF, Mr Muhideen Raji, said that the donor has a passion for the less privileged and rural dwellers.

The facilitator also said that the amount disbursed would assist the beneficiaries to meet up with their financial obligations.

“We distributed foodstuff and other items during the COVID-19 pandemic lockdown. The cash empowerment also cut across all the wards in Oyun Local Government Area. The beneficiaries also include religious leaders, market women, farmers, Fulani community among others.”

According to Olorundare, he has cultivated the habit of putting a smile on the faces of masses through empowerment scheme programmes, saying that the programme would be a regular occurrence.

“The programme would continue to be a non-stop and regular with a view to alleviating the suffering of the masses,” he stated.

He said that the empowerment programme and distribution of foodstuff during the lockdown were aimed to alleviate the suffering of the masses, saying that “I am giving back to the society what God has given me.”

Olorundare hinted that the gesture was borne out of love he has for his people. The foundation was divided into three segments namely; empowerment scheme; education and health support schemes.

Solskjaer on 3-2 with Liverpool: Manchester United won on their own terms. It's a good feeling
Hames scored 10 (3+7) points in Everton's home matches. Away - 0
Suarez scored his 12th goal of the La Liga season. Messi has 11
Miller on the Manchester United defeat: Devastated. There is no second chance in knockout football
Game of Thrones actor on Liverpool: Manchester United would have been destroyed a year ago. Huge progress
Ricard Puig: It's a pretty tough season, I'm not used to playing so little. Scoring with a header is something unreal
Khabib: I am preparing for my debut in big football. I am a free agent
Source https://tribuneonlineng.com/kwara-residents-get-empowerment-cash-donations/

Those who should talk are quiet – Saraki writes Buhari, others on tension in Ondo, Oyo

Ogun Gov’t To Probe Alleged Attack On Farmers By Soldiers

JUST IN: 15 Women Kidnapped In Niger

FG is portraying itself as ‘defender of Fulani herders’ -Falana

I Remain A Member Of APC – Okorocha

Fake policeman caught with 30kg of weed in Lagos

UBEC to collaborate with NASENI on home grown science equipment

Buhari Has Only Created Enemies For Fulani Herdsmen – Miyetti Allah

15 killed on Abuja-Kaduna highway while driving against traffic

2023: Why politicians should bury their presidential ambitions – Pastor Giwa

Gunmen kill policeman who arrested hemp smoker, cart away his AK-47 in Kaduna

6 Killed In Attacks On Kaduna Villages

Femi Fani-Kayode: Sunday Igboho and the threat of war

Juventus vs Bologna: Ronaldo reacts to Serie A 2-0 victory