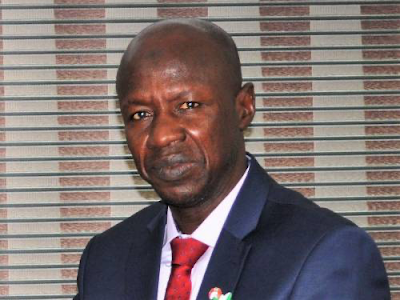 Senior Special Assistant to the President on Media and Publicity, Mallam Garba Shehu Tuesday cautioned the Peoples Democratic Party, PDP to allow the process of investigation and prosecution of corruption allegation against the suspended acting Chairman of the Economic and Financial Crimes Commission, EFCC, Ibrahim Magu, to work and not to unduly agitating the public.

The presidential aide said President Buhari, who doubles as African Union (AU) Anti-Corruption Champion in Africa, has firmly assured Nigerians that he will not be deterred by baseless criticisms by the opposition in his determination to eradicate rampant, chronic corruption.

Fielding questions from State House correspondents on issues raised by the PDP since the beginning of the interrogation of Magu, Shehu, said the volume and reach of the anti-corruption crusade so far reflect what the PDP left behind.

He said corruption became so normalized by the PDP that they had difficulty defining what is “corruption” and “theft”.

Shehu praised President Buhari’s determination to end corruption in the country as responsible for the number of highly publicized charges and cases.

According to him, “The large number of cases, new and old, may appear to be daunting but PDP, which is now heckling the President, has forgotten that the party bequeathed this to the current administration. They had large number of cases they did not investigate and prosecute. ”

He expressed hope that the Judiciary would deal with the cases swiftly and satisfactorily, in a manner that would deter other would-be offenders.

“The current administration is handling many of the cases that the PDP should have dealt with and the new ones as they arise,” he said.

Ander Herrera: if PSG don't win the Champions League, it won't be a failure
Arsenal are investigating the transfer of Pepe for 72 million pounds. The club wants to find out if he overpaid
Ole Gunnar Solskjaer: Manchester United knows how much it hurts to lose in the semi-finals. It's time for the leading players to prove themselves
Arsenal announced the departure of sports Director of Sunley
The Bayern coach who destroyed Barca. He was on Lev's staff at 7:1 in Brazil
Barcelona offered Pochettino a 1+1 contract. The club is in contact with Allegri and Henri
Call me Neptune. Ronaldo dived to a depth of 14 meters
Source http://www.nigerianeye.com/2020/07/magu-probe-allow-investigation.html?utm_source=feedburner&utm_medium=feed&utm_campaign=Feed%3A+Nigerianeye+%28NigerianEye%29

Transfer: Messi speaks on playing alongside Ronaldo at Barcelona

UPDATE: Lagos-Ibadan rail line to be delivered in January 2021 ― Amaechi

Ondo: We won’t take PDP for granted, APC campaign will be issues-based ― Sanwo-Olu

Give APC No Breathing Space In Rivers, Wike Charges PDP

‘Why I Don’t Show Off’ – Naira Marley

Edo: APC’s Ize-Iyamu opens up on violence at PDP rally

Pastor, 5 Others Arrested For Child Trafficking In Akwa Ibom

EXCLUSIVE: UNILAG: Inside the fraud allegations Governing Council relied on to ‘remove’ Ogundipe

(TRIBUTE): Walter Carrington, citizen of one country, son of two, by Bola Tinubu

Kano Singer: We don’t oppose the death sentence, it’s an Islamic affair – CAN

Ekiti elders counsel youths against violence over ban on festivals

BBNaija 2020: You are ugly, fix your face like your buttocks – Kaisha blasts Nnegi [VIDEO]

BBNaija: Kaisha Explains Genesis Of Her Fight With Nengi (Video)

CUPP condemns call for arrest of its spokesman, Ikenga

If Bola Tinubu fixed Lagos, he can fix Nigeria

Police Arrest Pastor, 5 Others For Alleged Child Theft In A’Ibom