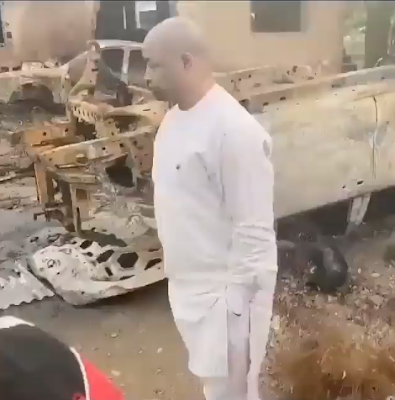 Musiliu Akinsanya popularly known as MC Oluomo has visited the Makinde Police Station in Oshodi which was one of the police stations burnt in the wake of the #EndSARS crisis.

The Chairman of the Lagos state chapter of the National Union of Road Transport Workers (NURTW), inspected the burnt police station with some of his comrades.

Watch the video below...

Real Madrid - the first La Liga club in the XXI century, which was awarded 5 penalties in a month
Real Madrid conceded 5 goals from penalties in the last 3 rounds of La Liga
Simeone Pro 1-0 with Valencia: They had the best goalkeeper. Atletico need to continue playing the same way
Salzburg scored 8 goals in the Austrian League match. Game with Lokomotiv on Tuesday
Juve have not won any of their three Serie A matches without Ronaldo
Scott Micromini: Pogba is misunderstood. This is an amazing player, his failures fanned
Andrea Pirlo: Ronaldo is an additional advantage, but Juve must play their own football without him
Source https://www.nigerianeye.com/2020/10/mc-oluomo-inspects-burnt-police-station.html?utm_source=feedburner&utm_medium=feed&utm_campaign=Feed%3A+Nigerianeye+%28NigerianEye%29

Ethiopia’s army says it is in control of Tigray capital

PDP flags off campaign ahead of Zamfara bye election

#UltimateLove: Rosie tells her side of the story, says she was physically abused

EndSARS: All I want is scholarship for my children, Widow of LASTMA officer killed by Police tells tribunal

EndSARS: I want scholarship for my children, widow of LASTMA officer killed by Police tells tribunal

Man Confesses To Kidnapping And Killing Boy, Begs To Be Hanged To Death In Public (PICTURED)

‘Not Everyone Who Dies Is A Good Person’ – Kemi Olunloyo

Advice us when necessary – Buhari to Atukum

Women are most reliable in politics — Oyetola

Wife Of Ondo Governor's Chief Of Staff, Four Others Released After Abduction

Niger Workers To Re-Embark On Strike Next Week

Nigerians youths charged to be active in leadership, governance

You will regret your actions – Islamic cleric warns Bobrisky [VIDEO]

Wike vows to sustain safe environment for investors in Rivers

EPL table: Liverpool still on top despite 1-1 draw with Brighton

How robbers attacked us while filming ‘Omo Ghetto’ -Funke Akindele