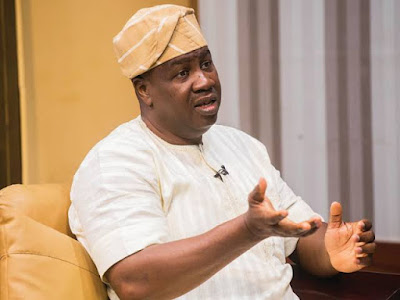 According to Guardian NG, Gbadamosi was detained after being spotted in a viral video attending a birthday party organised by Nollywood actress, Funke Akindele-Bello for her husband, Abdul-Rasheed Bello, held in Amen Estate, Ibeju-Lekki axis of the state.


Following the arrest of Funke Akindele, Gbadamosi had apologized for attending the house party, violating the Lagos State Government’s order, which barred a public gathering of more 20 people.

The actress hosted the in-house party at her residence in Amen Estate in Lagos on Saturday, April 4, to mark the birthday of her husband, Abdul Rasheed Bello, known as JJC Skillz.

Meanwhile, Naira Marley who also attended the party has been arrested and will be arraigned in court on Tuesday.

Agent Hakimi: Ashraf's Goal is to play for real
PSG goalkeeper Bulka crashed a Lamborghini in an accident in Poland. Two people were injured
Nice joined the fight for defender Olympiakos Tsimikas. Loco is Interested in Him
Lacazette has rejected the offer of Inter. He can be traded to Atletico for Lemar
Former CSKA chief scout: 99% of a scout's work is wasted. This is a specific feature
Victor Valdes led the club from the Spanish 4th League
Agent Jorginho: Two non-Italian top clubs contacted me
Source http://www.nigerianeye.com/2020/04/police-arrest-lagos-guber-aspirant.html?utm_source=feedburner&utm_medium=feed&utm_campaign=Feed%3A+Nigerianeye+%28NigerianEye%29

APC: Nobody can challenge my membership status – Pastor Osagie Ize-Iyamu

African Union, DG Naptip, Others At May 27th ASCI Borehole Commissioning In Abuja

Hunter’s Game just crossed 100k views, but you can still catch up

Coronavirus: Serie A to resume June 20

NCDC announces 182 new cases of coronavirus as toll rises to 8,915

Forensic audit of the NDDC

Tony Allen: Pioneer of Afrobeat Music and the controversies of his legacy

Economy: Many miles crossed, many miles lie ahead

How singing, making beats with desks earned me my stage name —DopeChild

COVID-19: We’ve yet to receive promised ventilators from US — Minister

US layoffs climb to 41 million, despite business reopenings

Transport fare rises despite drop in petrol price in April

Covid-19 and the increasing job losses

Five years of Buhari: We are glad he came our way

Living with your inner critic

Power to the wheels (transmission/gearbox)

Trump campaign labels Trump ‘a bull in a China shop'(Video)

Does the minister work for a Chinese company?

The orphans of coronavirus

Buhari’s five-years in the saddle (1)

Number of COVID-19 cases in Nigeria increases further by 182

BEfore you crucify Dr Pantami, by Oluwakemi Ola

Cancer patients twice as likely to die from COVID-19 ― Study

Ogun begins second phase of ease of lockdown from June 1