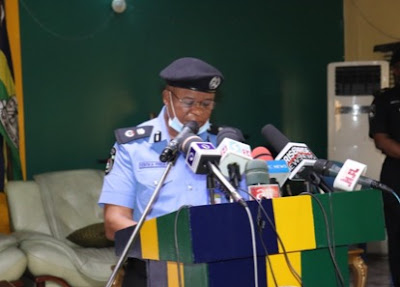 The Rivers State Police Command has disbanded one of its Tactical Units, Eagle Crack Unit over the illegal activities of its men.

The E-Crack Unit became the new Special Anti-Robbery Squad because of their notoriety especially with regard to the violation of human rights.

The latest incident involved the extortion of three undergraduate students of the University of Port Harcourt where E-Crack officers led the students to an ATM to make cash transfer of N150,000.

“The cash transfer was traced to one of our officers,” the spokesman of the State Police Command, SP Nnamdi Omoni said.

However, in a swift reaction to the several complaints of residents of Rivers State, the new Commissioner of Police, CP Friday Eboka disbanded the E-Crack.

CP Eboka said the decision was taken Friday morning after a meeting with his Management Team.

The Command in a statement said, “The dissolution is coming on the heels of complaints of unprofessional conduct exhibited by personnel of the unit.

“Recall that the CP in his Maiden Press Briefing on Tuesday promised to address all cases of infractions by the Police and increase supervision of the men, with a stern warning to deal with erring officers and hold DPOs/HODs vicariously liable.

“The dissolution is with immediate effect and all personnel attached to the unit are to report to the headquarters for redeployment.

”The public is hereby enjoined to rekindle their trust in the police, as the command is committed to giving them improved policing services that will stand the test of time.”

Conceicau on departure from Chelsea: I am proud of the Porto players. We played a fantastic game
Flick will accept the offer to lead the German national team. Matteus about the Bayern coach
Keylor Navas has never lost in the Champions League in a two-legged match in which he played
Mbappe dancing on the table 🕺 Watch as PSG celebrate their semi-final exit with passion
Pochettino on reaching the semi-finals: It's all down to the PSG players. I missed the adrenaline
Manuel Neuer: Bayern should have played better in Munich. We missed a lot of chances
Hans-Dieter Flick: Bayern lacked the final touch in attack. Congratulations to PSG

7 years after Chibok: Over 640 students abducted between December 2020 and March 2021—Amnesty International

What would it take to believe women on sexual harassment?

Okorocha opens up on ‘his EFCC ‘arrest’

Nigeria’s victory against insecurity’s around the corner — Pastor Adeboye

Is the storm over in South-West PDP?

I’m for consensus candidate if —Ozigbo

Iran to increase uranium enrichment to 60 per cent

The security breach in Imo

Broadcasting in search of patriot to clean up its failures

Upon Resumption from Easter, Senate suspends plenary over death of N’Assembly members

Johnson & Johnson vaccine halted in US, roll-out delayed in Europe

JUSUN: Lagos lawyers back call for suspension of strike

Biden proposes to hold summit with Putin in coming months

We need to prioritise our environment more than health facilities, says Fashola

Ramadan: Zamfara distributes 180,000 bags of foodstuffs to the poor

Chelsea into Champions League semis for first time since 2014

I was invited by EFCC, not arrested — Rochas Okorocha

Some of IPOB’s grievances are valid, they should be addressed squarely -Ikpeazu

Netflix debuts trailer for 'Chadwick Boseman: Portrait of an Artist'

Minister says only 11 of over 3,000 SGBV cases have been prosecuted