"We have lost everything, how do we begin?" - Owners of Lagos shops emptied by hoodlums lament 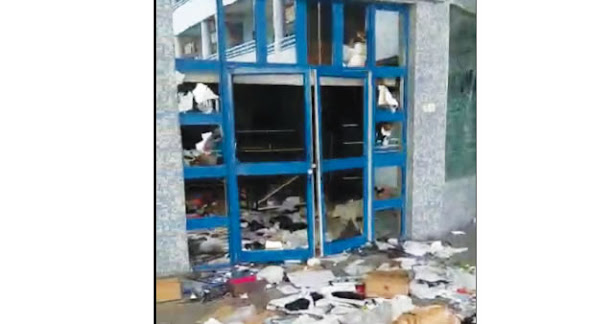 On July 1, Idowu Oluwaseun managed to rise from the impact of COVID-19 lockdown on her clothing business and switched to selling beverages. She stocked up her shop at Cherub Mall, opposite Alpha Beach Junction, Lekki-Epe Expressway, Lagos, with varieties of wine.

The single mother of three was gradually pulling back from the pandemic upset when a looting spree perpetrated by hoodlums who hijacked the #EndSARS protest plunged her into a fresh economic hardship.

“I am heartbroken,” she intoned. “They stole valuables worth N6m in my shop. They stole everything; expensive wine, chandeliers, freezer, chiller.”

In the coming days, weeks and months, Oluwaseun would struggle to recover from the huge loss she suffered, while battling to cater to her three kids who are in school.

She lamented, “How can I move on? I started the shop on July 1, after the lockdown. I invested all I had in it. I was lying down, thinking over it when your call came in. I can’t comprehend how they carried the freezer and chiller.”

It was learnt that a multitude of hoodlums stormed the mall around 2pm on Wednesday after a 24-hour curfew was imposed by the state Governor, Babajide Sanwo-Olu, to check the widespread violence across the state.

The assailants looted stores freely for hours, carting away goods and valuables worth millions of naira. They also destroyed at least 10 vehicles parked on the premises.

For Olawale Jegunmah and his wife, it was a double jeopardy. The couple lost their separate investment in the mall to the looters, who operated unhindered for many hours. While Jegumah runs a bakery, his wife is a seamstress.

Jegunmah said, “Almost 80 shops are in the mall. They looted everything and set some shops ablaze. I have a bakery and my wife runs a fashion outlet. They stole my mixer, slicer and a table we use for cutting bread at the bakery. They also carted away six machines and clothes in my wife’s shop. The property they stole in my shop was over N2m. That of my wife was about N1.5m.”

“I don’t know how to survive now with my wife and son. We have not even paid his school fees. All our means of livelihood are gone. We don’t know where to start from. I started this business a year ago. We will appreciate whatever support the government can give us.”

The manager of the mall, Samson Oyedemi, said he was in the facility with the security men and plain-cloth policemen when the hoodlums came and started banging the gate.

He said they initially chased them away but after 30 minutes, the thugs regrouped and invaded the mall.

He stated, “They were over 500. We were overpowered and had to run helter-skelter to safety. Before we knew it, they were all in the mall, breaking shops. It was monumental damage. We have 24 shops on each of the three floors; they vandalised all of them, including showrooms and an online store within the premises. They also broke into the management offices. They looted the shop till around 10pm. At a point, we were begging them to leave but they refused and more thugs joined them.”

Worker at an eye and dental clinic in the mall, Dr Ebereh Chijiuba, is currently at his wits’ end on how his family would survive. The raid had brought the health centre to its knees.

He said, “We lost all our equipment worth N30m. My wife just gave birth two weeks ago through a caesarian session. We spent almost all we had. My wife works at an eye clinic inside a Shoprite mall in Jakande. The mall was also burnt. We don’t know the way forward because both of us are now jobless.”

The owner of a mobile technology hub within the premises, Emmanuel Ojemen, told our correspondent he had yet to arrive at the value of his loss.

He added, “Apart from a furniture shop that still has some furniture items, there is nothing left in the entire mall. They looted everything in my shop. The loss is in millions. We have reached out to the owner of the mall and he promised to get back to us. We are waiting for him to tell us the next step.”

The nationwide EndSARS protest which started over two weeks ago took a turn for the worse in Lagos when men of the Nigerian Army shot at unarmed protesters in Lekki Tollgate for failing to comply with the curfew.

Amnesty International said 12 persons were killed in the shooting but Governor Babajide Sanwo-Olu claimed two casualties were recorded as of Thursday.

In the wake of the shooting, hoodlums went berserk, burning and looting public properties, police stations, and commercial establishments, including banks and shops.

Anton Ferdinand on the racist scandal with Terry: I was sent a bullet in the mail. Insults in social networks came every hour
Manchester City have offered 19 million euros including bonuses for 17-year-old Argentine midfielder Sarmiento
Rehagel is a bandit from whom I will not accept an apology. The story of the worst injury in the history of the Bundesliga
Barcelona's presidential election will be held on January 24
Koke: to beat Bayern, you need to play a nearly perfect match. I hope their unbeaten streak ends tomorrow
Loew can return Muller, Boateng and Hummels to the German national team if there are a lot of injuries
Nacho about the Real Madrid game: That's not how titles are won. Working to get better
Source https://www.nigerianeye.com/2020/10/we-have-lost-everything-how-do-we-begin.html?utm_source=feedburner&utm_medium=feed&utm_campaign=Feed%3A+Nigerianeye+%28NigerianEye%29

Addressing the scourge of African Swine fever through biosecurity

US telecom regulator says will step out when Biden steps in

Whither the NDDC probe?

Pompeo calls on Ethiopian PM for ‘complete end’ to fighting

FG to Nigerians abroad - "Stay where you are, don't come home for Christmas"

The intelligence community and the new challenges (3)

One out of seven Libyans needs mental health care – WHO report

A bad workman quarrels with his tools

How can Nigeria's economy look to stabilise as a global depression looms?

Moderna applies for authorisation of COVID-19 vaccine in US, EU

Soldier Writes On Injustice In Army Promotion Exercise, Says Officers Denied Promotion Because They "Have No Connection"

3.5m children of nomads are out of school, says Nomadic Education Commission

Beneficiaries of diaspora remittances to receive payment in dollars ―CBN

Looting of CBN: We can vouch for Gowon — Clark, Adebanjo, Nwodo, Bitrus

FG raises number of beneficiaries of N-power,school feeding, others

Tallen begs, police, judiciary for support in the fight against gender-based violence