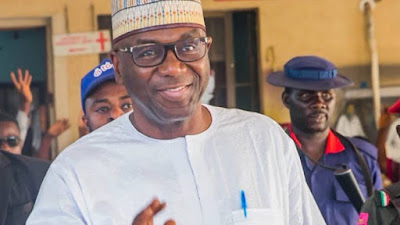 Kwara State Governor Abdulrahman Abdulrazaq has called for support for the police and other security agencies, while stating that the worst policeman is better than the best criminal.

According to Channels Television, Governor Abdulrahman said this while receiving the three Senators representing the Kwara at the National Assembly who paid him a visit over the destruction of properties in the state.

He stressed that the majority of the officers are patriots who are equally committed to a greater Nigeria, insisted that the events of the past few weeks especially the #EndSARS protest should not be framed in a way that might leave officers and men of the police demoralized or dejected.

The Kwara state Governor averred that demoralization of the security forces especially the police, might play into the hands of criminals who prefer anarchy to hurt their victims.

Liverpool and Porto broke into the Champions League play-offs - there are already 8 teams. Which ones? And who is about to be added to them?
Now Liverpool are also without Alisson. The group was won by his 22-year-old substitute with 0 minutes in the Premier League and the Champions League
Diego Simeone: In three games where there were draws, we deserved more
Conte on victory over Gladbach: We beat the group leader and are still alive
Klopp on the victory over Ajax: One of the most important matches of the Champions League in my time at Liverpool
Llorente on the draw with Bayern: we Feel anger and rage. A last-minute penalty leaves a bad taste
Jordan Henderson: aware of Liverpool's injury problems, but there is a sense of unity in the dressing room
Source https://www.nigerianeye.com/2020/10/worst-police-officers-are-better-than.html?utm_source=feedburner&utm_medium=feed&utm_campaign=Feed%3A+Nigerianeye+%28NigerianEye%29

FG to deliver over 1,000 gas-powered buses to organized labour — Sylva

#EndSARS: `My son was killed in my presence’, woman tells investigative panel

House Of Reps Ask For Review Of Medical Doctors Salaries

At Afternoon of Praise, Tributes: How Oyediran effected release of 10 prisoners recounted

Ultimus Holdings to invest $2bn in Nigeria, others

Maina To Be Extradited From Niger Republic Soon – Nigerian Police

Why Nigeria must increase GDP spending on STI – Onu

Senate confirms Yakubu as INEC chairman for another five-year tenure

Zabarmari: Killing Of Over 43 Farmers Was Retaliation, Boko Haram Says In New Video

“Must You Go Nude To Promote Your Product?” – Nigerians Blast Toyin Lawani

2 vaccines under trial have more than 90% efficacy to end COVID-19, says FG

Maina to be extradited to Nigeria soon ― Police

Maina Will Be Extradited To Nigeria Soon —Police

‘Be Selfish With Your Peace Of Mind’, Stella Damasus Advises

What it means to ‘Squirt’, Detty December on a Budget, 91 days in January | Funny tweets we saw from Nigerians today

How I lost my right eye in clash between prison officers, okada riders in Ibadan, man recounts

APC reacts to Yakubu’s confirmation as INEC Chairman, tasks him on next steps to take

Umahi Is After My Life – Former Senate President, Anyim

Three killed as cultists battle over supremacy in Sapele

Buhari Appreciates Nigerians For Patience, Urges Use Of Gas As Alternative To Petrol

Doctor sentenced to 14 years in prison for N5m fraud

Osinbajo finally reacts to massacre of Borno farmers by Boko Haram, reveals what will be done

Rage in the Senate over massacre of 67 Borno rice farmers

Call for Mercenaries to fight Boko Haram, vote of no confidence on Buhari – Shehu Sani