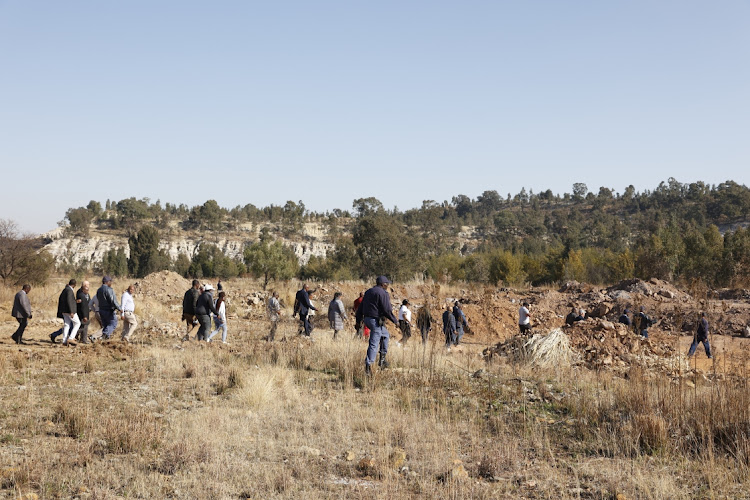 Parliament portfolio committee of minerals and energy members scanning the mine in Krugersdorp where eight women were raped, allegedly by zama zamas.
Image: Thulani Mbele

Izimbokodo — a movement for women under the Operation Dudula banner — wants the national defence force to be deployed in areas where illegal mining is rife.

On Wednesday, the group marched to the department of defence in Pretoria to call on the SANDF to help the police in combating zama zamas whom they allege are behind an assortment of other crimes besides illegal mining.

The women marchers said SA is under siege and ordinary laws and government powers are no longer sufficient to restore peace and order in the country.

“Our institutions are no longer coping and systems are buckling under pressure,” the group said,

Operation Dudula said together with its alliance partners (Put SA First, ATDF, Forgotten Citizens of SA, and others) through national joint operational and intelligence structure (Natjoints), wrote to President Cyril Ramaphosa in May, requesting him to declare a state of emergency on the illegal immigration crisis and resultant crimes, including the high prevalence of social crimes against women and children.

They want the deployment of soldiers to tighten security along SA's porous borders and also want officials stationed at the border lines to be dealt with, alleging it was there that national security was compromised.

The group expressed their concerns over the issue of zama zamas, ongoing rapes and murders of women, the high rate of kidnapping and human trafficking and other crimes, citing the recent incident where eight women were raped and robbed at a disused mine near Krugersdorp as an example. Their attackers were alleged to be zama zamas.

They also demanded the mass deportation of illegal foreigners.

They have given defence minister Thandi Modise seven days to respond to their demands.

MARKET WRAP: JSE stages minor rebound on the back of roaring Tiger Brands

Another ‘Vilakazi Street’ to be created in honour of Madikizela-Mandela, says Ramaphosa

Sundowns: Zwane names two Brazilians he looks up to

How climate change could cause lakes to change colour

Military doesn't know where its money or ordnance is

What the Croc! Tito Mboweni shows off ‘new shoes’

Has the infamous Musa Khawula finally learned how to say sorry?

King Charles III’s valet ‘squeezes’ out his toothpaste for him

Phaahla is seeking out alternative energy supply for the health sector

This is how load shedding battered the Rand to record lows

‘This country is sick!’ – Body of missing four-year-old found in Paarl

NEIL MANTHORP: Temba and Andile priced themselves out

Heritage Month: How the youth can embrace their cultural identity

Emirates to add extra flights to these 3 South African cities

Future Sold His Masters Publishing Rights, Worth Up To $75M, Following Irv Gotti And Justin Timberlake

iPhone 14 to be MADE in India instead of China

REVEALED: Pitso Mosimane’s length of contract at new Saudi side

Rand the third WORST performer this month after these 2 currencies

Recipe of the day: Delicious and flavoursome sweet malpua recipe

It never rains but it pours for Kaizer Chiefs

India series all about fine-tuning for Proteas: Tabraiz Shamsi

The Joburg Ballet presents: A classic on stage 'Cinderella'

WATCH: Here’s how Eskom generates (or tries to) the electricity we use