Canadians would largely be supportive of another widespread shutdown if a second wave of the coronavirus occurred, new polling from Ipsos suggests.

In a survey conducted on behalf of Global News, Ipsos found that 75 per cent of respondents would approve of quickly shutting down non-essential businesses in that scenario, with 37 per cent strongly supporting the idea.

Read more: Bars vs. schools? WHO says countries must choose, but it’s not cut and dried

About three quarters said they anticipated a second wave to hit their communities this fall.

The polling comes as Canada sees a dramatic resurgence in the virus, along with long lines for testing in some cities. In the last two weeks, the number of cases being reported across the country each day has risen by nearly 50 per cent.

In her most recent update, Canada’s chief public health officer said the uptick was cause for concern.

“With continued circulation of the virus, the situation could change quickly and we could lose the ability to keep COVID-19 cases at manageable levels,” Dr. Theresa Tam said in a statement. 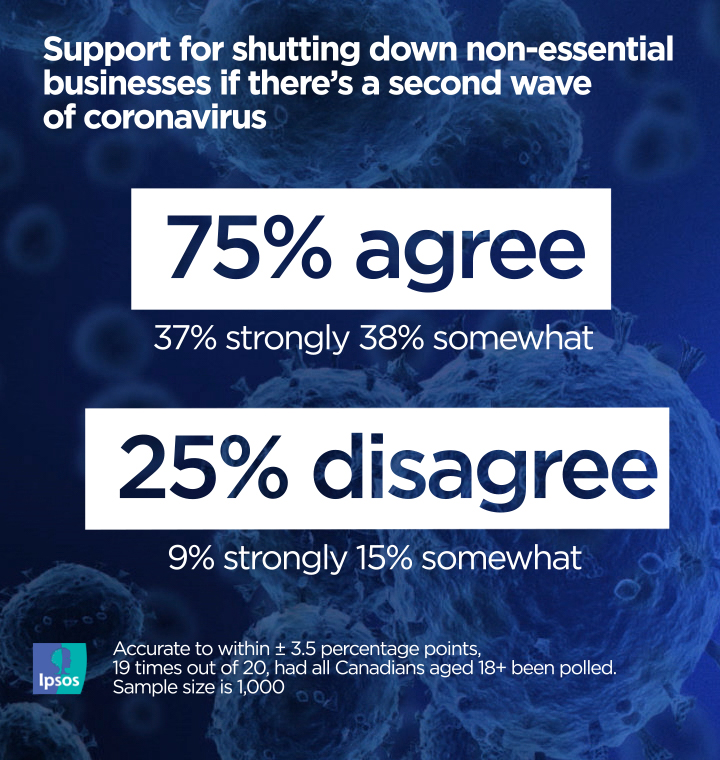 Ipsos Public Affairs CEO Darrell Bricker said as case counts rise, support for lockdown measures similar to what we saw when the pandemic broke out in the spring will likely increase.

“People are really watching on a daily basis … (the) number of case counts going up, and they’re really worried,” he said.

The support shown for shutdown measures in Canada is in line with an international trend, Bricker said. Ipsos polling shows people in many countries are generally on board with the unprecedented measures taken to combat the spread of COVID-19, though Canadians tend to show stronger approval.

“There is, generally speaking, a fairly consistent view that we need to be careful, that this is a real problem, that they believe that shutdowns and controls are a way of dealing with it,” he said. 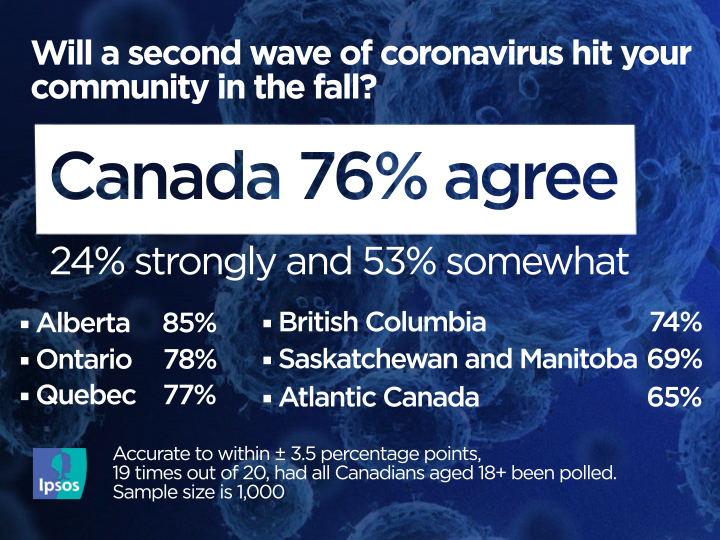 There were, however, some differences across the country when it comes to how well Canadians think their governments are prepared for a potential second wave.

Nationally, 71 per cent said they’re confident their province is ready, with 29 per cent disagreeing. But the proportion of those critical of their province’s ability to handle another wave of the virus was highest in Saskatchewan and Manitoba, at 42 per cent.

Read more: Time to stock up again? The likelihood of empty shelves in a second coronavirus wave

Just under two thirds of Canadians are concerned about contracting the virus themselves. Even though those who are older are most at risk, the bigger difference was between genders, the polling revealed. Seventy-two per cent of women said they were concerned versus 55 per cent of men.

“They tend to pay less attention to their health,” he said of men. “They tend to be less concerned about things that are risky.” 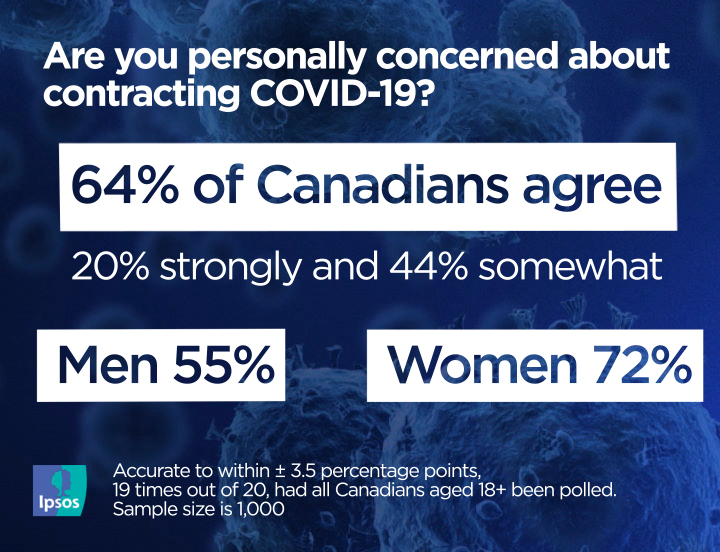 The poll also looked at the issue of mandatory vaccination in the event a vaccine is developed and approved. Almost two thirds, or 63 per cent of those asked, said they thought the vaccine should be mandatory, a figure that is down nine points since July.

The survey was conducted between Sept. 11 and 14 — after the start of the school year for most Canadian families. There have already been outbreaks reported at schools in a few provinces.

Thirty-eight per cent of respondents said they felt schools were opening up too quickly, while about half — 53 per cent — said the speed of reopening has been just right.

This Ipsos poll was conducted between Sept. 11 and 14, 2020, on behalf of Global News. For this survey, a sample of 1,000 Canadians aged 18+ was interviewed online. Quotas and weighting were employed to ensure that the sample’s composition reflects that of the Canadian population according to census parameters. The precision of Ipsos online polls is measured using a credibility interval. In this case, the poll is accurate to within ± 3.5 percentage points, 19 times out of 20, had all Canadians aged 18+ been polled.

Dembele scored in both matches of the Champions League - Juventus and Ferencvaros. In La Liga, he did not score for more than a year
Keane has scored 4 goals in PSG's last 2 games. In 37 games at Everton, he had the same number
Carragher on Mourinho: they Said his football was from a different era. If he won the Premier League, it would be great
Gennaro Gattuso: Napoli need to play above all praise to beat real Sociedad
Neymar was substituted in the 26th minute of the match against Istanbul due to injury. He was crying
Juventus shares have risen four times in five years. Ronaldo-this is only one of the reasons
Gary Neville: Mourinho gives Tottenham the confidence to win the Premier League. Jose is only Interested in winning
Source https://globalnews.ca/news/7342097/canadians-approval-second-coronavirus-lockdown/

Former U.S. Homeland Security chief of staff outs himself as 'Anonymous' who wrote criticism of Trump

Pompeo to stop in Vietnam during Asia tour

DARBY AND FEDELI: The importance of celebrating Ontario Made

At least 7 people taken to hospital after Trump rally in Omaha, Neb., due to freezing weather

Will the second wave of COVID-19 raise life insurance premiums?

Brownstein: 'People are not helping other people,' therapist says

Drive-thru flu shots to be made available in Collingwood, Wasaga Beach, Stayner, Creemore

Glavin: On the death of Samuel Paty – Shouldn't freedom of religion mean freedom from religion too?

Terry Glavin: Religious freedoms should include the right to be free of fanatics

‘He was a giant’: Don Mazankowski, former deputy PM in Mulroney government, passes away at 85

As COVID-19 roars back in U.S., Trump rallies in battleground Arizona

The show must go on: Hollywood stars in town after pandemic hiatus

Either outcome of U.S. election will be 'significant' for Canada: Freeland

Could The Toronto Raptors Play In Kansas City Next Year? The Mayor Wants It

Tilting tanker off coast of Venezuela could spill 1.3 million barrels of oil into Atlantic

Temagami taking the next step in broadband project

Canada will keep up heavy but ‘limited’ coronavirus spending: Freeland