It’s been a long time since fan have flocked to the Scotiabank Centre for some action-packed Mooseheads hockey.

The COVID-19 pandemic forced an early end to the Quebec Major Junior Hockey League season, leaving many wondering when they’ll be able to see hockey again that’s not on their television set.

But that doubt all went away last month, when the Scotiabank Centre announced it would reopen for the Mooseheads’ home opener against the Cape Breton Eagles on Saturday.

Cussons says they’ll be following all standard health and safety guidelines, including the mandatory use of non-medical masks, hand hygiene, physical distancing and contact tracing. 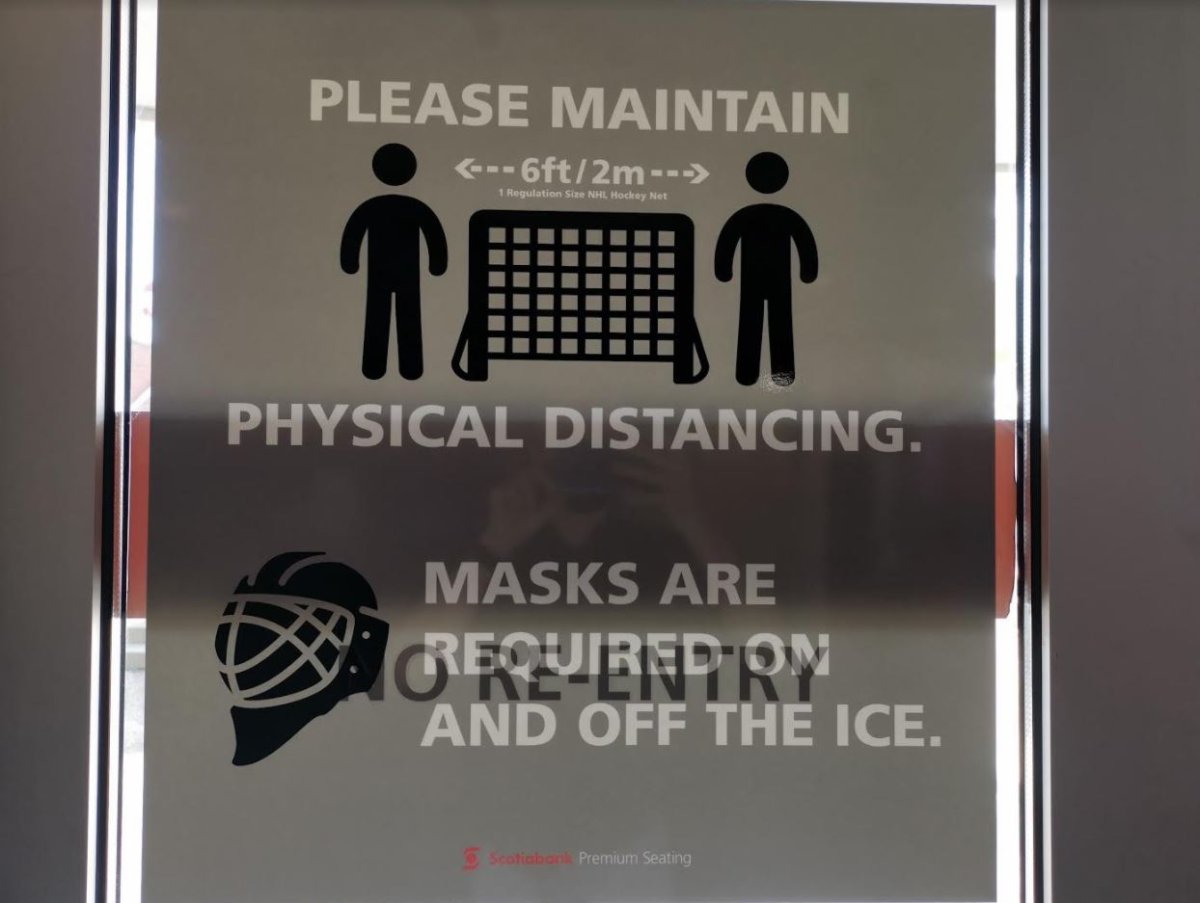 Social distancing signs like these can be seen throughout the Scotiabank Centre. Graeme Benjamin/Global News

They’ve also divided the arena into zones of of up to 200 people with set washrooms, concessions and entrance/exit points. Everyone’s ticket will indicate what zone they’re in and what entrance they should use.

“We’re making it easy for people because we’re colour coding it, you’ll have a bracelet when you come in, so it will remind you what zone you’re in,” said Cussons. 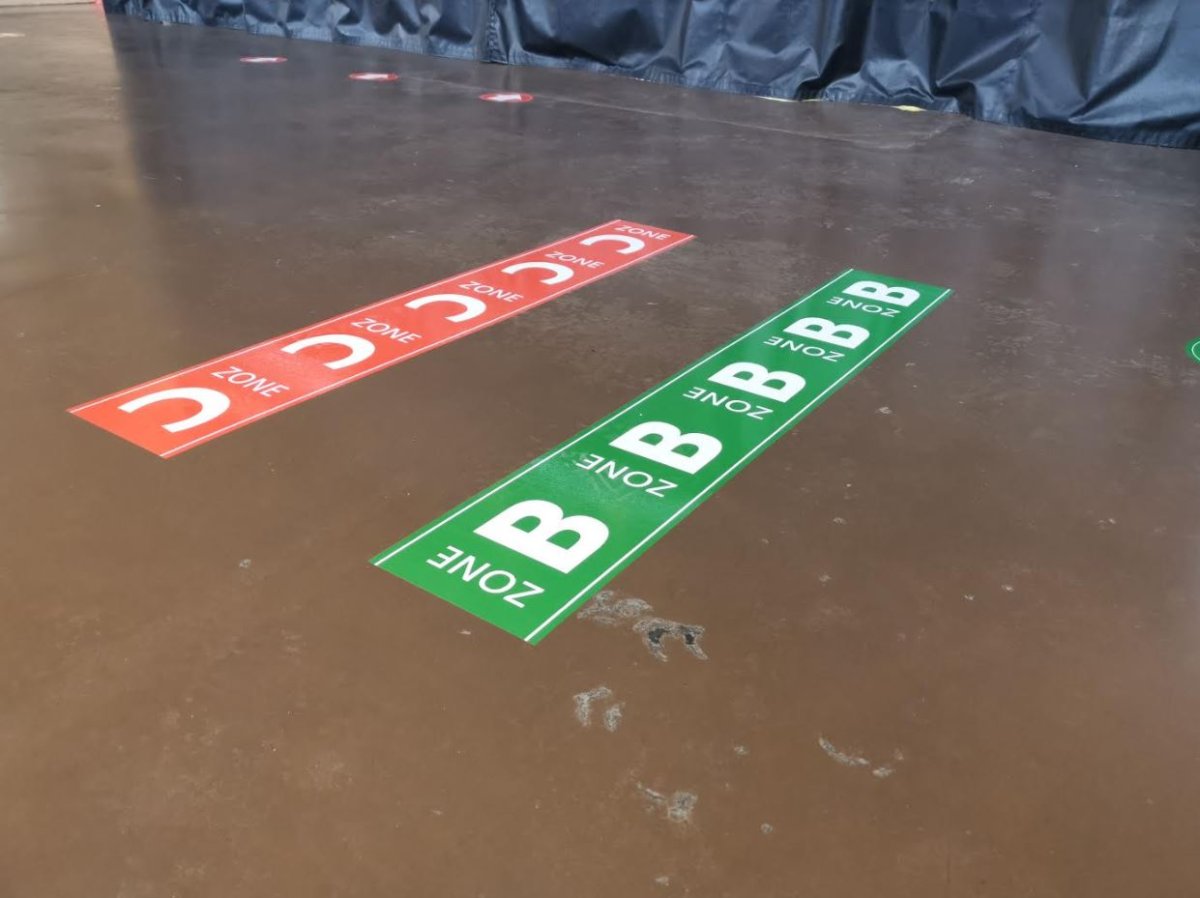 These signs on the floor show what zones fan should be staying in. Graeme Benjamin/Global News 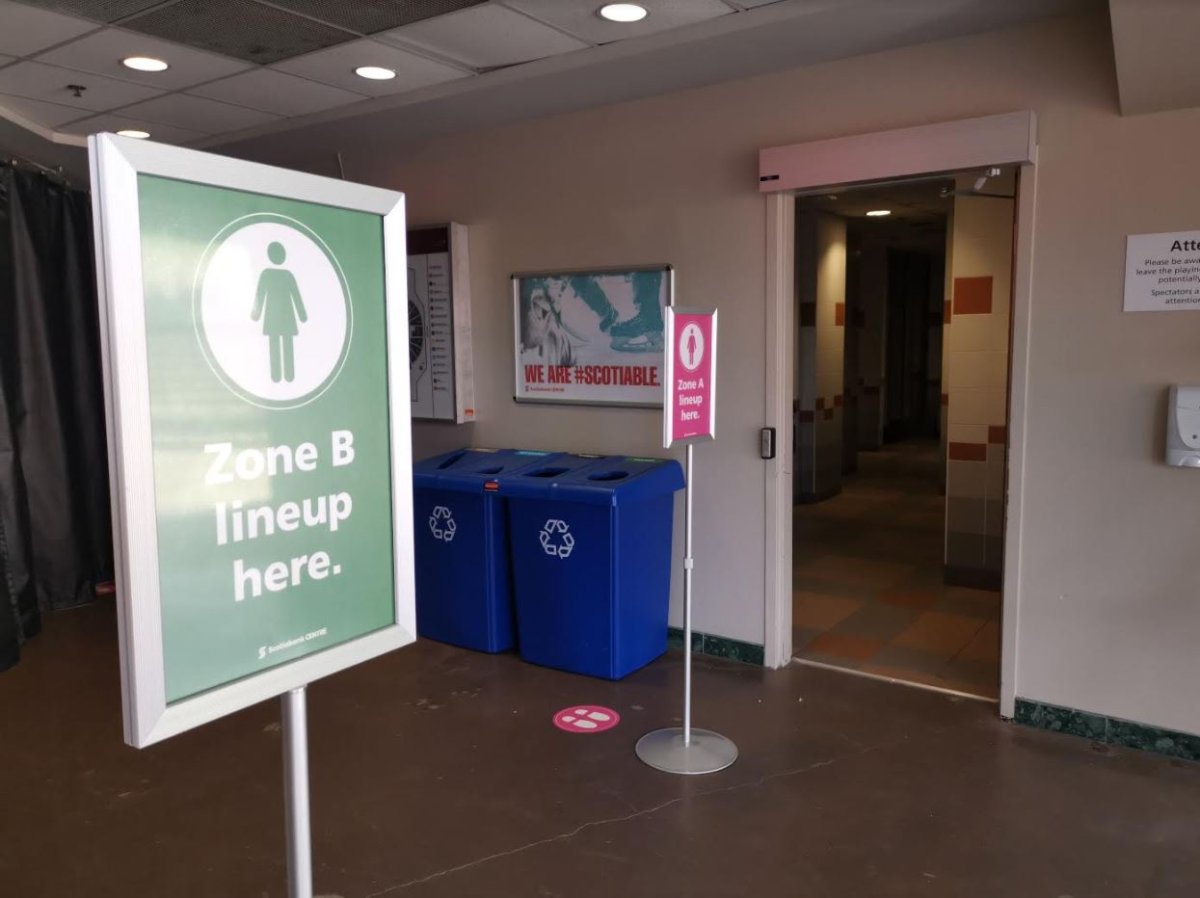 And these signs show which washrooms facility each fan should use. Graeme Benjamin/Global News

Tickets are being sold in groups of up to 10 within the same bubble in order to respect the province’s guidelines on gatherings. Fans are being asked to wear their non-medical masks at all times, except when consuming food or beverages.

Cussons says they’ve also stepped up their cleaning and hygiene protocols to look after frequently touched areas and surfaces. Hand sanitizing stations will be located throughout the venue and at all entry points, she added.

This year, fans will be returning at a reduced capacity and the season has been chopped to 60 games. The Mooseheads will only compete against the same five teams in the Atlantic bubble.

It’s a challenge the Herd says they’re ready to face head on.

“They’re just happy to be back on the ice,” said Brian Urquhart, president of the Halifax Mooseheads. “You can see it on their face, there’s lots of smiles, back with their friends and being able to play the game they love.”

Read more: Halifax Mooseheads return to ice with a plan to compete and keep COVID-19 at bay

Tickets for Saturday night’s game, which are available to both season ticket holders and the general public, are sold out. Their next home game is scheduled for Friday, Oct. 9 against the Moncton Wildcats.

Flick about 2:1 with Loko: the Victory looks deserved, although not as confident as we expected
Conte Pro 0:0 with Shakhtar: Inter are on the right track. We dominated, but we were unlucky
OPTIONS that left the Team in the game: penalty on Lewandowski turned in an offside position
Fabinho was injured in the match against Midtjylland. Replaced by 19-year-old Rhys Williams with 3 games in charge
Josep Bartomeu: Retirement after relegation from the Champions League would be a simple decision. But it was impossible to leave Barca in the hands of managers with limited skills
We didn't believe in Loco at all, and He came out to fight and attack. It was great, thank you
Josep Bartomeu: Barcelona has accepted an offer to participate in the European super League
Source https://globalnews.ca/news/7372573/halifax-mooseheads-home-opener/

James Beddome challenged for leadership of Green Party of Manitoba

Canada is offering this Cameroonian man a chance at asylum — but he’s stuck in U.S. custody, and the clock is ticking

OPINION: Let’s look at who is actually getting the Canada Child Benefit

Biden says he would expand sanctions on Belarus president’s ‘henchmen’

Coronavirus linked to mental decline, may age some patients’ brains by 10 years: study

Defunding police not the way to reform mental health response in Ottawa: Sloly

PM says feds will provide COVID-19 docs, but will be mindful of sensitive info 'risk'

Federal parties are sifting through the results of Toronto’s byelections. Here’s what they see

GoodLife encourages members to ‘stand up for fitness’, write their MPPs

What's Coming And Going From Netflix Canada In November 2020

Large hospital outbreak getting under control at St. Vincent

Rocker Éric Lapointe sentenced to probation for assault on woman

Yellowknife could use federal cash to set up temporary shelter

Fugitive Venezuelan politician to push for global condemnation of Maduro

'A little legacy': This dog was the first in Canada to test positive for COVID-19

Rights of woman who is deaf, blind breached by how student loan administered: Ontario court

The BC Liberals are looking for a new leader. Here are some possibilities

COVID-19: Here's what to know about B.C.'s second wave

Coronavirus: Latest developments in the Greater Toronto Area on Oct. 27

No fans, but still passion for Michigan State at No. 13 Michigan

Podcast | This Matters: The need for TLC in long-term care, during the pandemic and beyond

Canadians’ interactions with each other significantly reduced: cellphone data study

Biden lead over Trump grows in Michigan; race is statistically even in North Carolina -Reuters/Ipsos

Canadians support professor’s use of offensive language, in context: poll