Borat's back, but does 'extreme comedy' really change minds or just push people away?

"How dark is she wanting to go?" a worker at an Oklahoma tanning salon asks, motioning toward a board showing different skin tones. It's still early in the Borat sequel, Borat Subsequent Moviefilm, and Sacha Baron Cohen's titular character is bringing his daughter Tutar to local businesses for a makeover.

"What colour is best for racist family?" he asks in a thick accent. The woman only hesitates a second before answering.

"I would say right here," she says, and points near the middle of the chart. "I wouldn't go any darker than a six or a seven."

It's standard fare for Borat. The character has come to represent a particular form of gonzo journalism, as he convinces people to reveal opinions they'd rather keep hidden. The movie has already provoked strong responses, and some see it as a way to change public opinion.

"The results aren't pretty, but they can deliver lessons," a Washington Post review reads. Online magazine Inverse wrote that Tutar — played by Bulgarian actor Maria Bakalova —  "expose[s] America's deep-rooted sexism." Variety pegged the film as "capable of sparking laughs, fueling public discourse and engaging voters," while Baron Cohen even took a stab at a description himself.

A giant inflatable Borat barge was seen in Toronto's Harbourfront area on Thursday. The barge, a promotional stunt for comedian Sacha Baron Cohen's movie Borat Subsequent Moviefilm, was emblazoned with the message: "Wear mask. Save live."

"The aim is to make people laugh, but we reveal the dangerous slide to authoritarianism," he said in a New York Times profile, an echo of what he'd written in a Times Magazine opinion piece almost two weeks earlier. We Must Save Democracy From Conspiracies explains the dangers Baron Cohen sees in COVID-19 conspiracy theories — and how his various characters have been a foil to combat them.

"Yes, a lot of my comedy is uncomfortably pubescent," he wrote. "But when it works, satire can humble the powerful and expose the ills of society."

But how well satire works at changing minds depends on whom that satire actually reaches.

'Conspiracy without the theory'

Russell Muirhead is a professor of democracy and politics at Dartmouth College in New Hampshire and co-author of the book A Lot of People Are Saying: The New Conspiracism and the Assault on Democracy, which looks at how conspiracy theories have shifted away from the classic model into what he calls "conspiracy without the theory."

Using "Pizzagate" — the false story of a Democrat-run child sex-trafficking ring based in a restaurant in Washington, D.C. — as an example, Muirhead explained how the creation of conspiracies has changed.

"Classic conspiracy theory might begin with an event like the assassination of [John F. Kennedy] or the attack on the World Trade Center and try to explain an event that's accessible through common sense," he said. "Pizzagate doesn't do that. It doesn't gather evidence and facts."

Because of that, confronting such ideas with truth is particularly ineffective, Muirhead said.

Baron Cohen's workaround is to expose them for an audience. In one sequence in the film, Borat stays with believers of QAnon — a fringe theory related to Pizzagate that claims the "deep state" is colluding against U.S. President Donald Trump.

After they explain their beliefs around adrenochrome harvesting — a conspiracy theory that includes the assertion that Hillary Clinton harvests and consumes adrenaline from children — they balk at a fake medical book Borat shows them.

The Hollywood Reporter, the National Post and others pointed out the irony of the scene, but whether this type of humour will actually change anyone's mind — especially the two men featured — is suspect.

Amy Becker is an associate professor of communications at Loyola University in Chicago who researches the effects of political entertainment and comedy on voter engagement.

In a 2019 study on "extreme comedy" that focused on Baron Cohen's style of duping politicians in Who is America, Becker found that audiences tended to react to those situations along party lines: If they already believed what they were being told, they were likely to find the comedy credible. If they don't hold the same beliefs, the opposite effect can be seen.

That puts Borat at risk of merely convincing people who are already convinced. 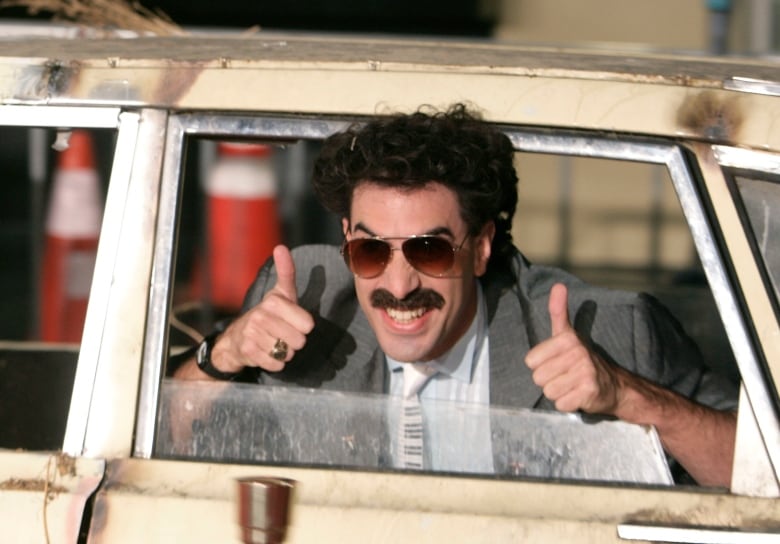 Sacha Baron Cohen arrives in character for the premiere in Los Angeles of Borat: Cultural Learnings of America for Make Benefit Glorious Nation of Kazakhstan on Oct. 23, 2006. With the release of the sequel 14 years later, some believe his style of comedy may affect audiences differently. (Matt Sayles/The Associated Press)

"I think that people are pretty fixed in their beliefs these days," Becker said. "So I'm not sure that it's necessarily doing much to change opinions for people who are on the fence."

Muirhead has similar concerns. While satire is "a very powerful tool in politics," he said, Baron Cohen's ambush style — where he interviews unsuspecting people and elicits embarrassing responses — could push those on the fence away.

And that is the group most likely to be swayed by such satire, he said. "True believers" of conspiracy theories are rare, while thoughtful citizens confused by a "blizzard of misinformation" are much more common.

"And when a blizzard becomes a whiteout, it can be very disorienting," Muirhead said. "That's the group I'm really, really concerned about, and that's the group where the great antidote to disorientation is common sense."

If people do see Baron Cohen's comedy as lighthearted instead of a form of mockery, Muirhead said, it could still have a great impact.

But there is something standing in the way of that. The world Borat inhabits today is different from the one he was in 14 years ago, Vulture journalist and movie reviewer Bilge Ebiri says.

In the first movie, Borat was largely an equal-opportunity offender. Now, Ebiri said, he mostly goes after those on the right. 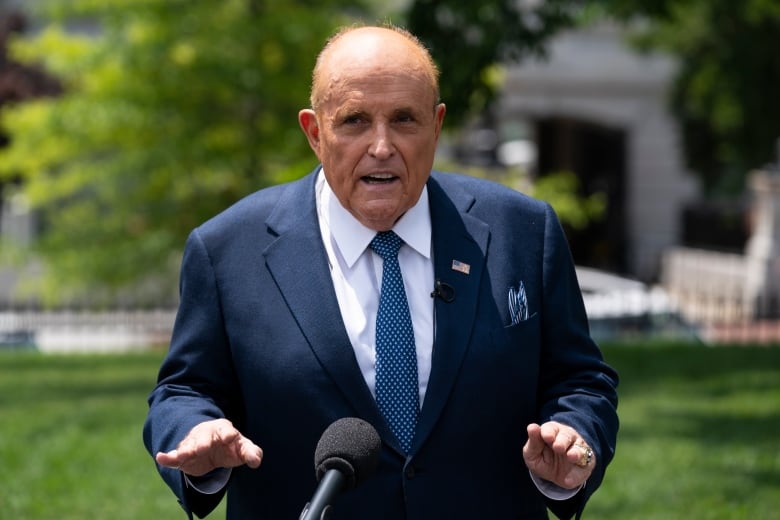 And in 2006, Baron Cohen could simply show people saying shocking things to generate a response. Now, Ebiri said, such revelations have become standard fare — something audiences are more likely to gloss over.

Ebiri pointed to the scene in Borat involving Rudy Giuliani — U.S. President Donald Trump's personal lawyer and a former New York mayor — in which he was caught on hidden camera lying on a bed with his hand down the front of his pants. Tutar stands nearby as he does, while posing as a journalist.

That generated a wave of news stories, but few, Ebiri said, touched on Giuliani's statements before that scene, where he claimed China manufactured the virus that causes COVID-19 and spread it around the world on purpose.

"A statement like that, just something that is so blatantly untrue," Ebiri said, "being uttered by an ostensibly respectable politician, that would have been bigger news 14 years ago."

That, he said, shows how much differently people react to the style of comedy in 2006's Borat compared with the sequel. And if we're already inured to misinformation, he said, there's not much use in Borat exposing it.

The cutest video of the weekend-Antoine Griezmann's daughter celebrates a goal with her dad 😻
Deeney on Cavani: he didn't mean to offend, but a three-match suspension and training will be enough
Raul Jimenez suffered a fractured skull. Wolverhampton forward operated
Yuri Rozanov became a commentator, bypassing the age limit. Before that, he won the channel One competition, but instead of going to Euro 1996, he got a TV
Van de Beek on injured ankle photo: Welcome to the Premier League 🤪 💪
Mourinho again closed out the top match with quality. Sissoko is a key element of Tottenham's reliability
Instagram instagram post: Cavani can be banned for 3 matches for saying Negrito
Source https://www.cbc.ca/news/entertainment/borat-sequel-conspiracy-theorists-1.5775439?cmp=rss

Motor racing-Fittipaldi to replace Grosjean at Haas for Sakhir GP

‘The hate did blind me’: A ‘Bathtub Girl’ explains why she took her mother’s life

Paul Delean: Taxes may go up if COVID-19 has kept your company car parked

‘The worst is yet to come’, report warns as Ontario food banks see rise in first-time users

'It's easy to dismiss them, unfortunately:' What's behind non-adherence to the public health pandemic guidelines?

The face of death has changed in the second wave. More are dying at home

Biden should clarify US position on digital tax within two months, France says

Ukrainian volunteers step in to battle oxygen shortage in hospitals

Ethiopia’s war is not over, says leader of Tigrayan forces

The federal fiscal update and O’Toole’s vaccine complaint: In The News for Nov. 30

Merriam-Webster's top word of 2020 not a shocker: pandemic

COVID-19 caused surge in demand for food banks, which was already on the rise: report

UK holds firm on fish in Brexit talks with EU

Turkish exploration vessel back in port ahead of EU summit

Up to 100 of Johnson’s lawmakers are unhappy with COVID lockdown, minister says

Senior Living: To meat or not to meat?