Calgary police are investigating a popular scam that has been spreading across North America, and has allegedly arrived in Alberta’s largest city.

It involves the fraudulent sale or rental of sea cans or mobile shipping containers. Calgary police said they were notified of a case — possibly the first one in the city — last week after the owner of Secure-Rite Mobile Storage Ltd. filed a complaint.

Lucas Griffin, who started up Secure-Rite years ago, told Global News his Calgary location was contacted by a potential customer who had received a quote from a different company to get a container. The problem — that company was using Secure-Rite’s Calgary address.

He added that this is a big deal because this type of scam can really hurt a company’s reputation.

“A customer comes to our address saying, ‘Hey, I’m here for my container,’ and at that point we say, ‘What container?’

“Then you have an irate customer who has parted with $4,000 or $5,000, and they think they paid for a container… And you’re not going to give them a container, because you haven’t received their money.” 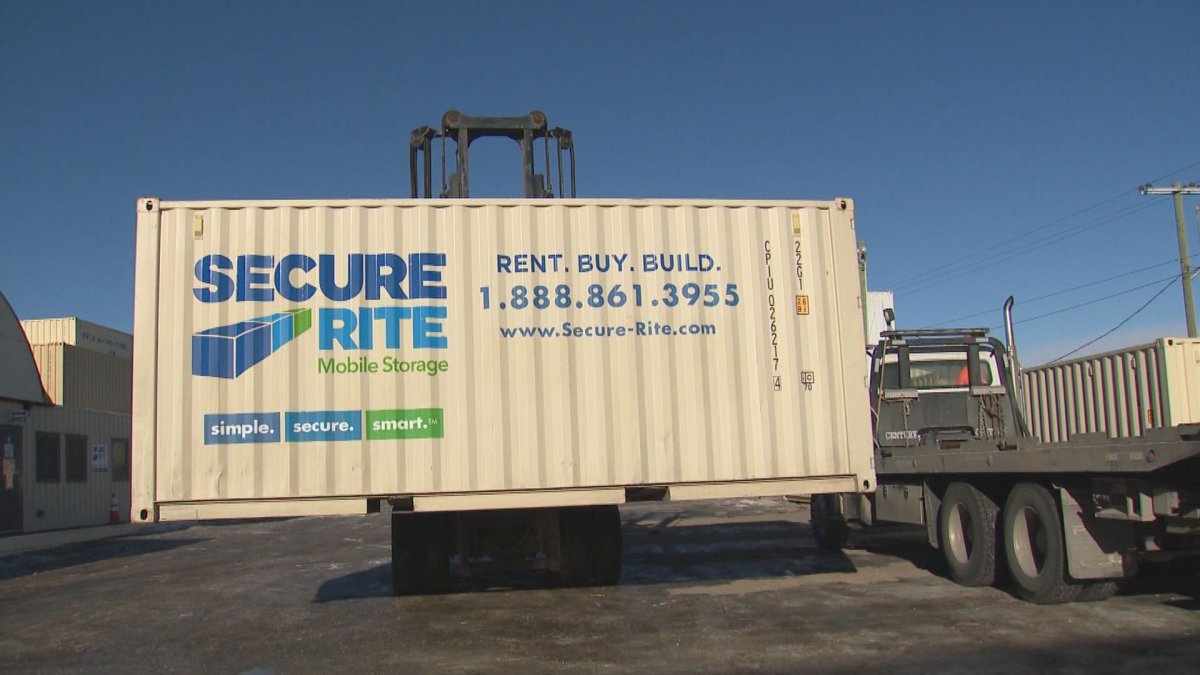 Griffin said the customer told his staff they had been dealing with Class Sea Cans. On that company’s website, it shows an address in Galveston, Texas as well as the one in Calgary.

Global News contacted Class Sea Cans several times at the numbers listed on the website. We also tried to reach them by email. No one from the company called or emailed us back.

Const. John Pye with the Calgary Police Service couldn’t tell us any specific details about the ongoing investigation, only that police believed fraudsters used legitimate information in order to develop their own website. He also said while generally it can be difficult to catch online scammers, victims should still come forward and file a complaint.

“Especially for frauds,” he said. “There is always residual evidence left over by the offenders that could lead us to identifying them or locating them, whether it be IP addresses or even contacting the webmaster to shut it down.”

Griffin said the really frustrating part for companies like his is not knowing where the alleged scammers are coming from.

“It is frustrating because these people are working behind an IP address somewhere, from a burner phone somewhere. With technology nowadays, it’s easy for them to hide.”

Read more: Calgary couple say they lost thousands of dollars after being caught in loan ‘mess’

Both Pye and Griffin advised consumers to be extra vigilant when dealing with online companies.

“If their pricing is far below the industry, that should be a warning sign,” Griffin said.

He told Global News that he knows of several sea can company owners in other parts of Canada that have lost money as well as their reputation as a result of these types of frauds. Griffin added he’s just glad he’s not one of them — and neither was his potential customer.

“We have worked hard to build our reputation,” he said.

“It’s frustrating to me that — as if Canada and the world is not going through enough right now — to have somebody stealing money.”

Secure-Rite has also flagged the case to the RCMP, the Canadian Anti-Fraud Centre and authorities in Texas.

‘I want my rights’: The 80-year-old Lebanese musician fighting for a COVID-19 jab

Coronavirus: COVID-19 and the Canadian economy, one year later

COMMENTARY: Scientists must keep their work front and centre — even after the pandemic

Michelle Obama to be inducted into U.S. National Women’s Hall of Fame

Nun kneels in front of police to stop Myanmar violence

Meghan’s father says the British royals are not racist

Only BYU can stop No. 1 Zags from reaching NCAAs unbeaten

Meghan’s father says: the British royals are not racist at all

Lockdown of greater Paris not on the cards, says health director

Lockdown of greater Paris not on the cards – French health director

Mars on Earth: Turkish lake may hold clues to ancient life on planet

Oilers take down Senators for 5th time this season

‘I was a Markle before she was’: Meghan’s half-sister hits back at Oprah interview comments