More than a dozen Canadian flight attendants are sick with COVID-19, with one recently released from an intensive care unit in Calgary, CBC News has learned.

Many airline crews remain on the job as international and domestic flights continue to take thousands of Canadians home during the global pandemic.

But flight crews and their unions are becoming increasingly vocal in demanding better protective equipment, including protective suits or gowns, and mandatory testing for COVID-19.

"We are on the front line and we are exposed to people from all around the world. We have connections from all over the world."

CBC News agreed not to publish her name or that of her employer, as she is not authorized to speak publicly. 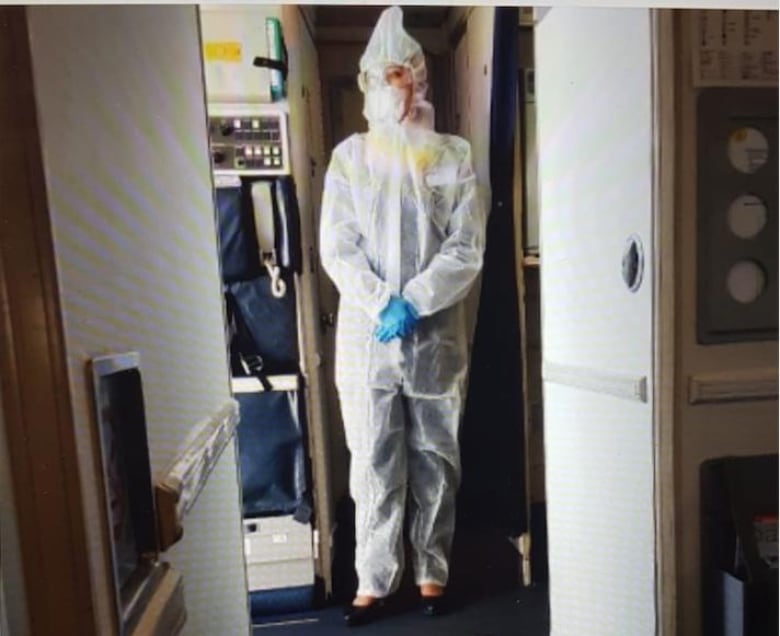 Protective suits and goggles are now required equipment for crew on Ukraine International Airlines, a measure of how far some in the airline industry are going to protect workers during the global emergency.

Canada's airlines are now required to provide gloves, masks, wipes and sanitizer to employees. Wearing the gear is optional, except when handling food.

WestJet confirms seven of its employees have COVID-19, and Air Transat says four of its flight attendants and one pilot are sick.

Air Canada, which has a much larger workforce and operates the most flights, declined to say whether any of its employees had tested positive.

However, sources tell CBC News that a number of Air Canada employees are ill, with clusters in Western Canada and Calgary, where at least one employee had been hospitalized.

In the U.S., an American Airlines flight attendant died this week, highlighting the risks flight crews face while helping to get passengers home.

Crews on Canadian airlines remain in close quarters in the sky and find it impossible to keep the standard two-metre distance that health officials recommend for the general public.

While regular meal services have been shut down, flight staff still come into close contact with passengers.

"They're walking by me as they're boarding the plane. Definitely isn't a six-foot distance," the flight attendant told CBC News.

Air Canada's main flight attendant union says some of the supplies being provided don't fit properly and that it is time crews be provided with full-length protective gowns. 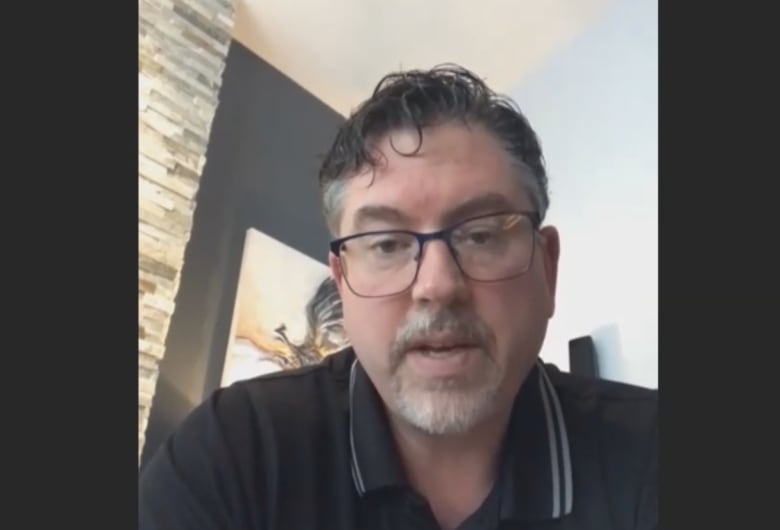 Wesley Lesosky, president of the Air Canada component of CUPE, says crew members currently do not have the proper personal protective equipment to wear while flying with passengers during the COVID-19 outbreak. (Zoom/CBC)

"We need the equipment; we need it yesterday," said Wesley Lesosky, president of the Air Canada component of CUPE.

He said the union looked into the feasibility of hazmat suits but concluded disposable gowns would be easier for crews in tight quarters and pose less risk for contamination and spreading the virus.

In a statement, Air Canada told CBC News the crisis is an "evolving situation" and that as the understanding of COVID-19 increases, the company expects to take additional measures.

But the union is calling on the federal government to move quickly.

"It has to be government intervention to say enough is enough. We need to ensure these people are properly protected. The airlines are trying their best, but obviously it's not good enough," Lesosky said. 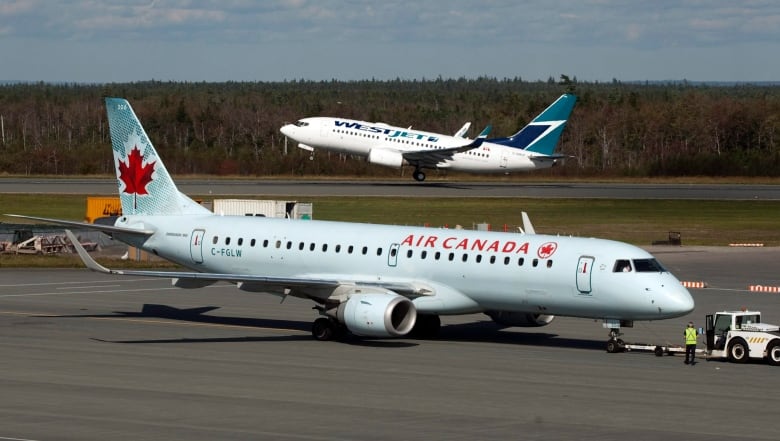 WestJet says seven of its employees have COVID-19. Air Transat says four of its flight attendants and one pilot are sick. Air Canada declined to say when asked by CBC News. (Andrew Vaughan/The Canadian Press)

The Public Health Agency of Canada (PHAC) declined to say whether it would mandate protective suits.

"PHAC has provided guidance on hand hygiene and respiratory etiquette and for disinfection and sanitation practices for airlines," a spokesperson said in an email.

Numerous flight attendants have told CBC News and are sharing messages with each other on social media that they are proud to be helping during the global health emergency but feel helpless to protect themselves.

The unnamed flight attendant quoted in this story recalled a recent repatriation flight where passengers clapped when the plane landed in Canada and thanked the crew for its efforts during the COVID-19 crisis. 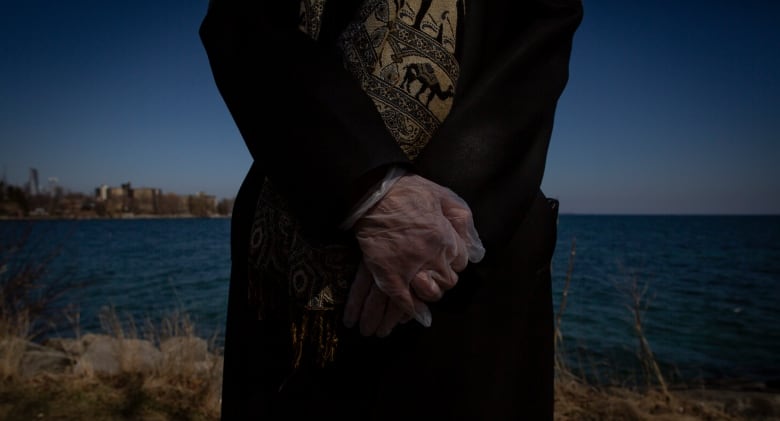 "One man, I'll never forget his face. He ... looked right at me and he said, 'You're my hero!'" she recalled. "I got emotional. I started to cry under my mask."

Such moments make her realize the importance of the role she and her colleagues are playing in getting Canadians home, she said.

La Liga wants to start the new season in September with 30% of the stands filled
The management of the Premier League excludes the possibility of canceling the relegation this season
In 2001, Beckham played the best match for the national team. He was inspired by a girl with a unique disease-an inverted heart
Inter will get 15 million euros if PSG sell Icardi to another Italian club
Langle does not want to leave for Inter from Barcelona
Lineker on Messi: I am a fan of Ronaldo, but the title of the best player in the world can not even be discussed
Gianfranco Zola: Hazard and Willian suffered from Sarri's training
Source https://www.cbc.ca/news/health/flight-attendants-protective-suits-1.5513439?cmp=rss

What B.C. can teach Quebec about controlling outbreaks

Weather: Cooler, chance of showers, no humidex in sight

Protests flare around the United States over Minneapolis killing

Coronavirus: Ontario realtors offer tips on how to get your house ready for sale

Why Canadians can’t ignore this sign of bladder cancer, even in the COVID-19 pandemic

How finding a ministerial home for CMHC caused ‘madness’ in November

From AC units to patio decor: 6 ways to upgrade your COVID-19 summer

ASK AMY: Handyman’s attitude isn’t much of a fix

Jumping back into the market? Watch for these five danger signs

Quebec town across from N.B. community with COVID outbreak gets testing centre

Protesters prepare to rally in Toronto against anti-black, Indigenous racism

Russians rush to public bath after lockdown without hot water

The pandemic could be an opening to build a better Parliament

Can a store make me wear a mask to shop? Your COVID-19 questions answered

Germany, a global leader on COVID-19 response, cautiously comes out of lockdown

Cricket-West Indies to temporarily halve salaries of staff and players

Uzbekistan extends duration of coronavirus curbs, but eases some

Unrest flares in U.S. cities despite arrest of Minneapolis policeman

Life and death in the Sheridan Villa COVID ward