Canada
Trusted
CBC
An article was changed on the original website

Four birchbark canoes glided through Kejimkujik Lake, N.S., this weekend, leading a flotilla of paddlers there to celebrate a summer of canoe building.

Todd Labrador constructed the Mi'kmaq canoes by hand and had help from apprentices from Bear River First Nation for the two newest ones. Fourteen-year-olds Karlee Peck and Cedar Meuse-Waterman collected spruce roots, harvested bark and spent weeks transforming the raw materials into the 16-foot vessels.

Cedar's mother, Rosie Meuse, worked alongside them as they whittled then sewed the spruce root through the bark and shaped the hull with cedar ribs, using skills that were new to them. 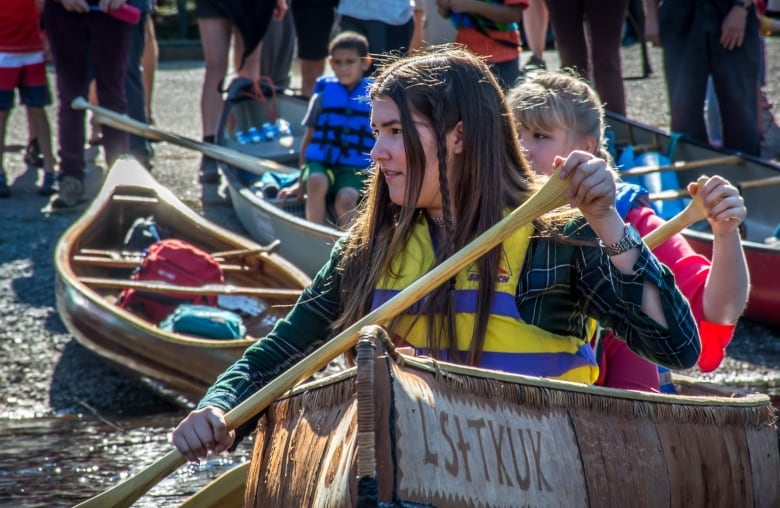 "It was beautiful, I loved it. They glide so nice... I felt like I was in a Ferrari," said Meuse as she slid into shore. "I can't wait for my next one."

Meuse said it was moving to see her daughter and Peck learn under Labrador's tutelage.

"It was amazing, I'll cherish it forever," said Peck. "It's definitely made me appreciate my culture a lot more. I feel like I took it for granted before, but I don't now." 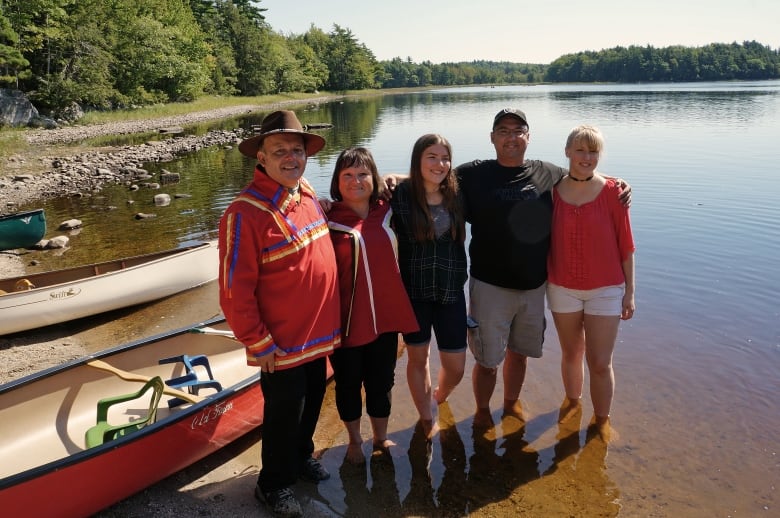 On Saturday morning, the two 14-year-olds paddled in the canoe they built, accompanied by Carol Dee Potter, Bear River's chief.

"I feel proud after when I got out there… just taking it all in was really amazing," said Meuse-Waterman.

"It was really special to get it out and be out there with everybody. It paddled well, there were no leaks or anything. I think we're lucky about that," said Peck with a laugh. 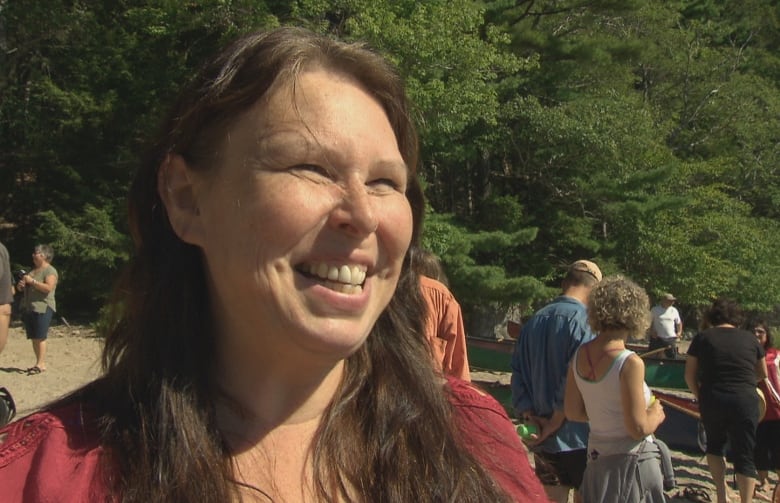 One of the canoes will go to Bear River First Nation, the other to Annapolis Valley First Nation.

"The power and the strength that was in that canoe, and the confidence in those girls … The ancestors, the spirits, were with us and I just give thanks to them," she said. 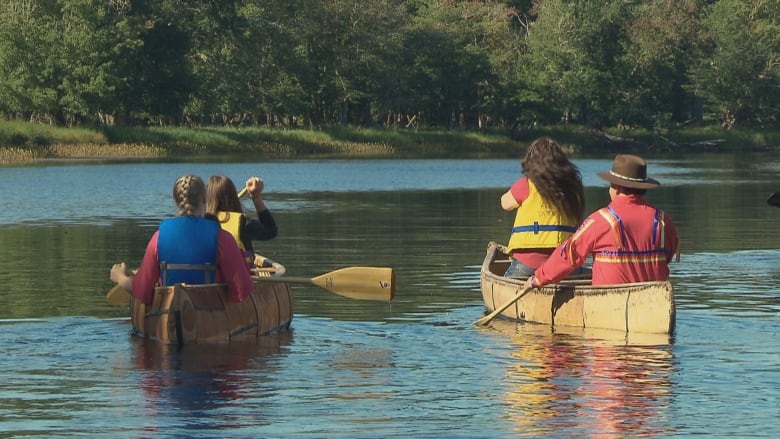 One of the new canoes belongs to Bear River First Nation, the other to Annapolis Valley First Nation. (CBC)

The canoe project was part of summer programming in the national park. Visitors were able to drop by Labrador's workshop in a converted kitchen shelter several afternoons a week.

"Where they built these canoes on the shores of Keji lake, they turned this space into being absolutely alive with culture, a sense of family and a sense of community and sense of fun," said park superintendent Jonathan Sheppard.

Labrador's family has paddled along the waterways in the area for generations. Locations through the park — like Jeremy's Bay and Luxie Cove — now bear the names of his relatives. 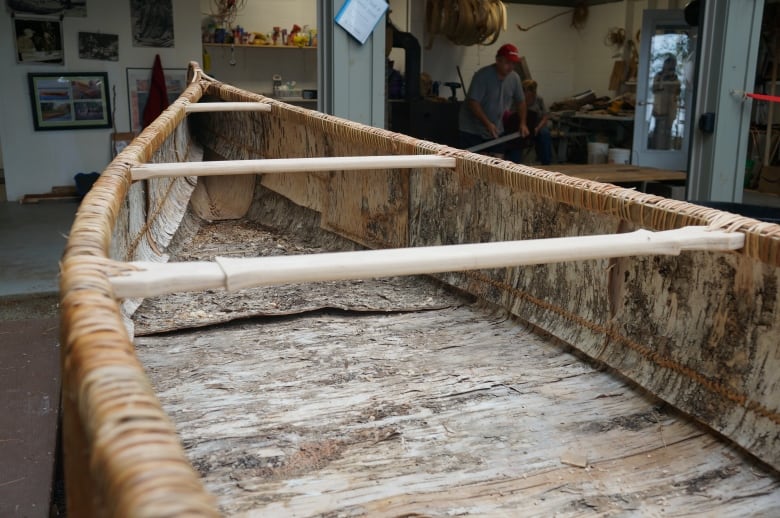 The group spent about a month building each canoe. Before they installed cedar ribs, the sides of the canoe were at right angles. (Elizabeth McMillan/CBC)

Labrador told the group assembled for the launch that he remembers running around the park as a youngster the day it opened in the 1960s. He was there with his father, the late Charlie Labrador, who was a chief of Acadia First Nation.

"Sometimes it takes a long time to get it right, but I think we're in the best situation now that we've ever been to getting it right," he said as he thanked Parks Canada staff before guiding the canoes into the water. 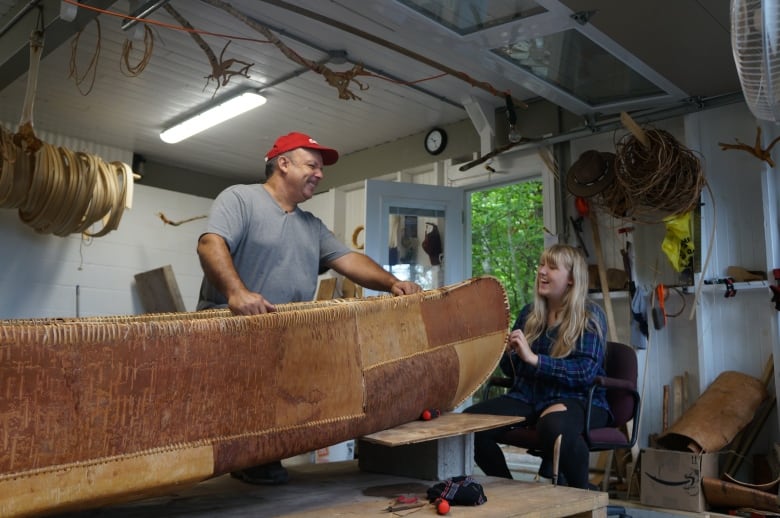 Though he joked that his hands and back are sore, Labrador said as he has aged it's become more important to share his craft and involve communities in his work.

"It's all about getting the word out there to let people know — across Mi'kma'ki, across Nova Scotia, and across the world — that we're still here. We've gone through hard times. But we're still here, we're still people and we have so much to share and offer."

Кад Cadiz returned to La Liga after 14 years
Pioli about 2:2 with Napoli: One point is a good result
Gattuso on Milan's penalty: the Rule needs to change. Jumping with your hands behind your back is another sport
Milan will offer 25 million euros for Celtic defender Ayer
Klopp on plans: Four years at Liverpool. After that, I want to do nothing for a year
Rogers Pro 1:4 with Bournemouth: Leicester play well only 45 minutes after the break
Inter and Roma are Interested in Garay
Source https://www.cbc.ca/news/canada/nova-scotia/todd-labrador-mi-kmaq-birchbark-canoe-launch-1.4825858?cmp=rss

Kelowna man paints picture of his time on the streets

Florida sets one-day record with over 15,000 new COVID cases, more than most countries

It’s back to work for Maple Leafs GM Kyle Dubas

ODDS AND ENDS: Nude intruder and other offbeat offerings

Former All-Star 2B Bolling dies at 88

After layoff, reshuffle, Fire ready to kick off MLS is Back

Montreal bar patrons, workers line up to get tested for COVID-19

Behind the Game: The challenges of being a player agent

Shaw knows he’s safer in Canada than being in the U.S.

21 injured in fire aboard ship at Naval Base San Diego