Mahalia Yakeleya-Newmark wants to see more public art in Yellowknife that shows the strength and resilience of Indigenous people in the North — and a new fellowship is helping to turn that vision into a reality.

Yakeleya-Newmark, who is Shutoatine Dene and Métis, is one of the 20 recipients of the NDN Collective's inaugural changemaker fellowship.

"I'm so excited," she said. "I've always loved the arts and I've always found the arts a place of, for me, healing and a place that is really powerful and can be transformative."

The collective based in South Dakota, selected 20 Indigenous changemakers across Canada, the United States and Mexico who are making investments in their communities for the 12-month fellowship.

We have made so [many] contributions to this place and to this country and we are beautiful people.- Mahalia Yakeleya-Newmark

"It's really a celebration of Indigenous people here in the North and the opportunity to tell our own stories through art," she said. "I really wanted something that would bring joy and celebration and political advocacy to Yellowknife."

For Yakeleya-Newmark, it's also important that the process behind the murals is collaborative. She said artists will be paired with youth to develop the images for the murals and then paint them.

"I think our youth are so strong, they have such amazing ideas and they're really our future leaders so it's important to have them involved in this," she said. 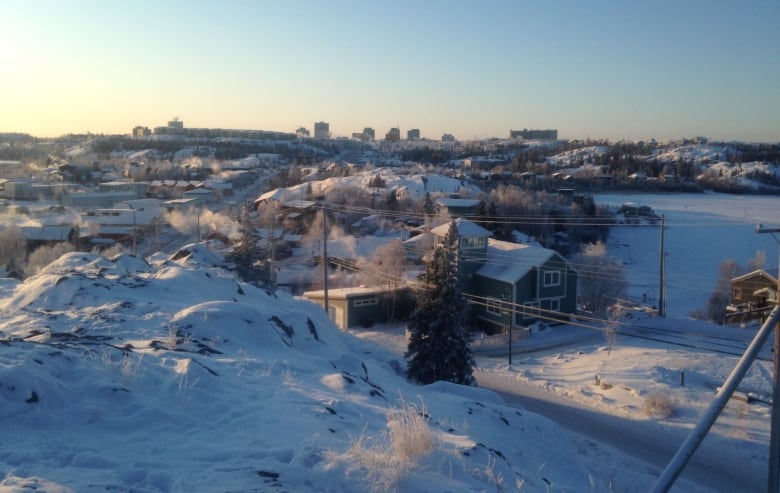 Mahalia Yakeleya-Newmark says she's working with the City of Yellowknife to identify locations for the murals throughout the city. (Andrew Pacey/CBC)

Yakeleya-Newmark is passionate about healthy communities as a new mom and someone who works in health and wellness. She said walking to work downtown everyday, she often hears things about Indigenous people that "are not very nice" or focus on tragedy.

"There is so much more to who we are and we have made so [many] contributions to this place and to this country and we are beautiful people."

She said the mural project was also inspired by long talks with her sister about how to honour their late cousin Mariella Lennie and other missing and murdered Indigenous women in the North. Lennie was 17-years old when she went missing in October 1991. Her body was found in Yellowknife in 1992 but her murder remains unsolved.

"I think it's really important that this project honours those women," Yakeleya-Newmark said. "Women are really the life force of our community and we are the ones who hold our communities together."

Yakeleya-Newmark said a sub-committee is in the process of finding artists and youth to participate in the project. She is also working with the City of Yellowknife to identify locations for the murals.

"I am so excited about this project. I think there's so much joy and inspiration and hope but that there's also a deep meaning in this as well."

Doctors embrace drug touted by Trump for COVID-19, without hard evidence it works

After what would have been spring break, Manitoba parents tackle teaching kids at home

No decision on resuming play before May, says Commissioner Silver

Jonathan Kay: The case for wearing face masks during COVID-19 was obvious a month ago

China sent Canada ‘millions’ of masks to fight COVID-19. Here’s what you need to know

More than $150,000 raised for family of critically injured Walmart guard

‘I thought I was invisible’: A Vancouver doctor’s story of contracting COVID-19

Acting US Navy secretary apologizes to carrier commander after rebuke

LEVY: Doctor speaks out from the front lines

Why is B.C. flattening the COVID-19 curve while numbers in central Canada surge?

COVID-19: Coquitlam company retools, will be first in Canada to produce N95 respirators

Dan Levy on the legacy of ‘Schitt’s Creek’: ‘We succeeded when this show was a hit in Canada’

Coronavirus: Quebec government will not overturn hospital’s ban on guests in delivery rooms

Hair tutorial: How to touch up your roots at home