New Brunswick premier Blaine Higgs has announced he's backing away from the controversial plan to close six emergency departments between midnight and 8 a.m. in a month's time.

Higgs issued a news release shortly before 8 p.m. Sunday. He said hours will not be reduced at the hospitals in Sussex, Sackville, Sainte-Anne-de-Kent, Caraquet, Grand Falls and Perth-Andover.

"We have experienced a multitude of reactions and genuine concerns to the regional health authorities' reform plan," he said in the statement.

"I can't in good conscience move forward without addressing the concerns and fears that have been brought to light." 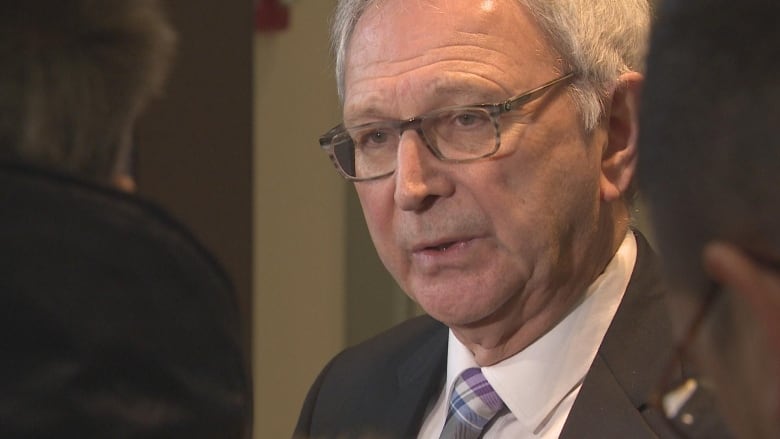 The changes were scheduled to go into effect March 11. Now Higgs said there will be further consultations in April and May.

"I will personally visit these communities to initiate the process to ensure that we hear from community leaders, the people delivering care and concerned citizens," his statement said.

There will be a "health-care summit" in June to discuss a long-term strategy for the system and the challenges in rural communities, Higgs went on to say. He committed to releasing the findings of both the summit and the community meetings sometime this fall.

The province had also been proposing to convert acute-care beds to long-term care beds in response to a shortage of staff and beds.The rationale was that cutting overnight ER hours at the six hospitals would free up more doctors to work during the day, when demand for service is higher.

Opposition to the proposed health reforms was swift.

Hundreds of protesters stood outside the hospital emergency room in Sussex on Tuesday, ringing bells, waving bright orange signs and chanting "rural lives matter." A similar angry crowd gathered in Caraquet as the changes were announced.

On Friday, MLA Robert Gauvin resigned as deputy premier and said he would sit as an independent MLA, calling the changes an "attack on rural New Brunswick."

An aging demographic coupled with a growing labour force shortage is hampering our ability to provide the right care, in the right place, at the right time.<br>But we need people in this province to be part of the solution &amp; that must start with hearing from the people most impacted

Weekly survey: How has your media consumption changed in the time of COVID-19?

More than $40,000 raised for family of critically injured Walmart guard

Grocery store employees are essential during coronavirus, but they’re scared

One dead after shooting in Thorncliffe Park area

Romania will extend state of emergency by 30 days – president

Some roadwork to know about and STO reduces service

Fire breaks out at abandoned log house in Brampton

On an empty Via Dolorosa before Easter, praying for the world’s sick

3 in 4 U.S. hospitals already treating coronavirus patients with worst yet to come

SEX FILES: Is it true love or just the quarantine talking?

Thinking about death amid coronavirus? A living will could help

Lyon: Cellphone tracking might help stamp out COVID-19. But at what cost?

Pellerin: COVID-19 is teaching us that we have our priorities upside down

That was then: No bread, no milk – a city awash in disease

Coronavirus: Ontario parents, teachers say transition to e-learning will be a learning process

Today's letters: Palliative patients have a right to comfort

Testing times for India in race to head off coronavirus epidemic

Watch for other COVID-19 symptoms Ottawa woman warns as virus puts her mom, 71, in ICU

Allison Hanes: As we confront our mortality, rush is on to prepare wills

ASK AMY: COVID-19 pushes one spouse out of bed

Rick Zamperin: Let’s face it, sports won’t be back any time soon

Austria plans to start reopening shops from next week

Japan to declare state of emergency for about a month – PM

Negotiating mortgage or rent deferrals to keep afloat through the crisis? Aim for the win-win solution

Is the COVID-19 stock slump a buying opportunity? Not if you’re borrowing, say experts

Already living paycheque to paycheque, some Canadians are being pushed over the brink by COVID-19

New federal aid and COVID-19 survival instinct; In The News for April 6