The Ontario government's move to push through a bill cutting the size of Toronto's city council nearly in half is to resume first thing on Monday as legislators gather for a rare midnight session.

The Progressive Conservative government called for the midnight session Saturday after the opposition parties refused to pass the bill with unanimous consent.

Ontario's lieutenant-governor granted the government's request to reconvene the house at 12:01 a.m. Monday to continue to expedite the passage of Bill 31.

The government made the rare move because it finds itself crunched for time this week at the legislature. The International Plowing Match, an annual agricultural expo in Chatham-Kent, Ont., is set for Tuesday, and each year Queen's Park closes for a day so all politicians can attend.

The midnight sitting will allow the Tory government to reach the needed 6½ hours on this stage of debate to push the bill forward in the legislative process.

Earlier this week, City of Toronto clerk Ulli Watkiss said that with each passing day it becomes "virtually impossible" to ensure the city provides its residents and candidates with a fair election.

House Leader Todd Smith said the city needs certainty around its election, which is set for Oct. 22, so the bill must be passed quickly.

The government hopes to have the legislation passed by the end of the week.

Official Opposition Leader Andrea Horwath criticized the Ford government's actions again Sunday saying that the premier's priorities don't match those of Ontarians and that the best option would be to withdraw the bill.

"Doug Ford has dragged our entire province into his personal grudge match against Toronto. He's trampled our charter rights, attacked our courts and now routinely sees members of the public thrown out of the legislature for daring to oppose him," Horwath said in a news release. "The best chance of allowing Toronto to hold a fair, democratic election this fall is for Bill 31 to be withdrawn." 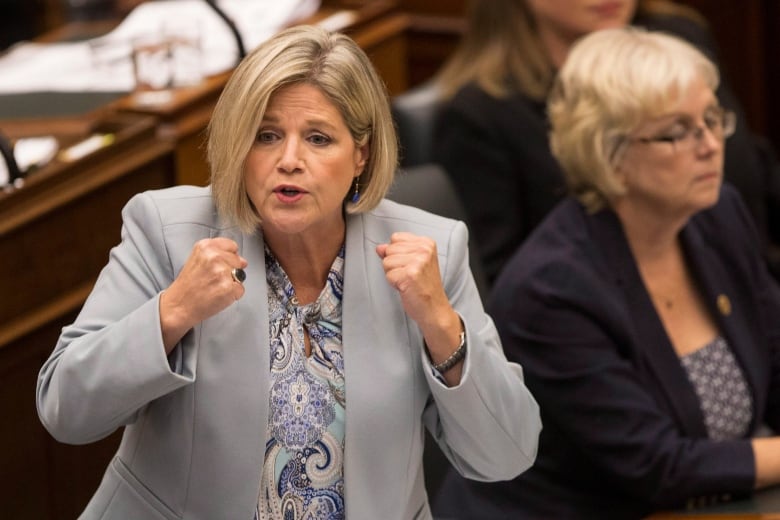 Toronto Mayor John Tory also expressed his opposition to the bill on Sunday.

"This thing is wrong. It has been wrong from the beginning, and it's still wrong," he told the media Sunday. "Whether they sit at midnight or not is not going to make it right."

Tory added that he believes that the decision to use the notwithstanding clause sets a bad precedent. 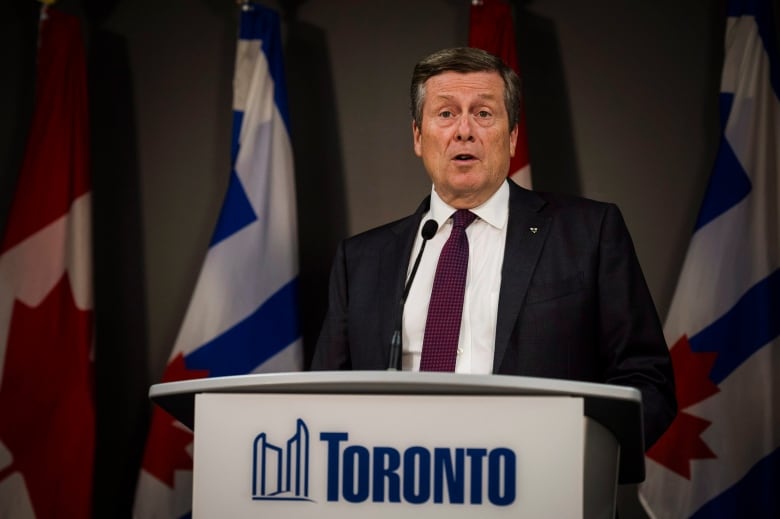 Toronto Mayor John Tory said Sunday that it is important to get certainty for the city. (Christopher Katsarov/Canadian Press)

"This is not a national emergency — the changing of seats on the city council — it's something that should've been consulted on carefully, but it's not something that ever justified the use of the notwithstanding clause," Tory said.

"The precedent that is being set is that you can just run over the rights of municipalities this way and pay no attention to them, and then run over charter rights."

Bill 31, officially dubbed the Efficient Local Government Act, would slash the number of Toronto councillors from 47 to 25.

The new bill reintroduces legislation that was struck down by an Ontario Superior Court judge, who said it violated the charter rights of candidates and voters in Toronto's Oct. 22 election.

The legislation will invoke the Constitution's notwithstanding clause to overrule the court decision.

On Sunday afternoon, some members of Ontario's legal community called on the province's attorney general to not support the government's move to overrule a court decision striking down an earlier version of the legislation.

An open letter signed by about 400 legal professionals was sent to Caroline Mulroney asking that she not support the use of the Constitution's notwithstanding clause.

Will Hutcheson, a family lawyer based in Toronto, said he wrote the letter on Wednesday and published it online, and since then it has been signed hundreds of times. He said he is sending it to Mulroney and her office on Sunday ahead of the midnight sitting.

The Ministry of the Attorney General did not immediately respond to a request for comment on Sunday.

Alaves Garitano dismissed after five defeats in a row. The club is in 15th place in La Liga
Mane scores 20+ goals for Liverpool for the 3rd consecutive season
If you whistle one violation, whistle another. VAR rules football! Athletic midfielder Dani Garcia on the match with Real Madrid
Lautaro did not score a penalty in the match against Bologna
CEO of the banner of Labor about a player who was hit by lightning: he was put in an artificial coma. Most likely, it will be taken out in the evening
Real goes into the gap under the talk of refereeing. In similar moments, Madrid were given a penalty, but Athletic were not
Sergio Ramos: I would Play tennis if I wanted personal recognition. It is very nice to win with the team
Source https://www.cbc.ca/news/canada/toronto/toronto-council-cut-1.4826032?cmp=rss

Why are there so many geese in Metro Vancouver?

Statue of Christopher Columbus toppled by protesters in Baltimore

Three dead in collision on Route 3 in Georgetown Royalty, P.E.I.

Quebec reports that 79 more people have tested positive for COVID-19, eight have died

Facebook confronts civil rights complaints it put off for years

3 dead after single-vehicle crash on Route 3 in Georgetown Royalty, P.E.I.

COMMENTARY: Can we achieve racial equality when education does not negate ignorance?

Ottawa’s coronavirus deficit will take ‘many, many years’ to pay down: economist

Is a home revo-lution coming?

'Driving while Black' convoy to protest racial profiling in Montreal

Nova Scotia reports no new cases of coronavirus on Sunday

Only 1 active case of coronavirus in New Brunswick, none in hospital on Sunday

Growing with the sun: Cannabis companies look to outdoor cultivation

Be a leader when buying a new home

Man rushed to hospital after being stabbed multiple times in North York: police

CERB Recipients Face A ‘Shock’ At Tax Time. Here’s How To Prepare

156 dead in Ethiopia after protests erupt over death of singer

Three people, including 7-year-old, in hospital after campfire explosion near Perth, Ont.

U.K. looking closely at Huawei’s use in 5G, minister says

Amid furor over monuments, Trump seeks 'garden' of U.S. heroes

Second drowning within 24 hours in the area

Protester hit by car on closed highway in Seattle dies

While you were sleeping: Last gasp of the long weekend

Pellerin: Some pandemic-parenting tips as the summer unfolds