A Canadian zoo known for its retro commercials is getting taken to task over the way it treats its elephants.

Advocacy group In Defense of Animals gave African Lion Safari the number one spot on its 2020 list of the worst North American zoos for elephants to live in. The group maintains all elephants in zoos should be released into accredited wildlife sanctuaries.

The zoo — which can be found on “Highway 8, between Hamilton and Cambridge, Ontario” as anyone in the province who grew up hearing their catchy ads could tell you — is accused of being “the epitome of the elephant exploitation business.”

Its alleged wrongdoings include breeding elephants to sell, which calls for separating them from their families. Sending them from zoo-to-zoo for this process is traumatic, the group claims.

“Many zoos on this year’s ... list repeatedly truck elephants between facilities for breeding to attract more paying visitors,” wrote Will Anderson, a coordinator from the group. Even young elephants are separated from their mothers by some of the zoos on our list.”

African Lion Safari was also criticized for its use of bullhooks, sharp tools used to control animals in captivity, which leading animal welfare organizations have condemned.

The Association of Zoos and Aquariums says it voted to phase out the bullhook, a type of baton used to control elephants in captivity — and a lightning rod for criticism from animal rights advocates https://t.co/T8810uihva

It’s also being criticized for making elephants do tricks and give rides. The animal rights group World Animal Protection (WAP) called the zoo out in 2019 for those practices.

“The animals are stressed when they’re constantly being held or patted or forced to give rides or to perform tricks,” WAP’s Canadian spokesperson Melissa Matlow told CBC at the time. “This is an unnatural activity for them.”

The zoo’s website claims African Lion Safari has the highest number of Asian elephants born in North America. It has yet to respond to the advocacy group’s list. As of last December, 22 elephants have been born there.

Their grey herd frequently gets featured on the zoo’s social media, which has shown people snapshots of how its wildlife has been faring during the pandemic. African Lion Safari is currently closed for the season, but had drive-throughs available for visitors last summer.

The second-worst zoo on the list, Fort Worth Zoo in Texas, was called out by In Defense of Animals for looking to sell off two elephants, eight-year-old Nellie and Emily, 15, separating them from their family.

African Lion Safari hasn’t made the annual list before, but it’s not the first Canadian zoo to do so. Edmonton Valley Zoo nabbed seventh place last year, for its treatment of Lucy, a 45-year-old elephant with health conditions. 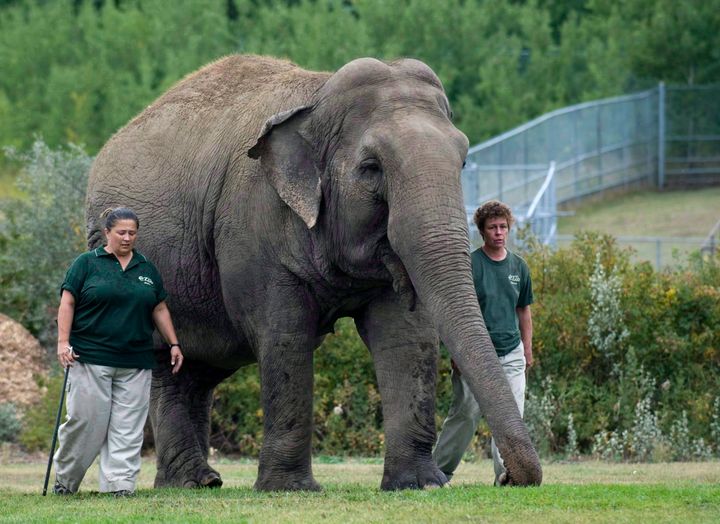 Lucy the elephant with her handlers, circa 2009. A Supreme Court dismissed a case about her treatment in 2019.

Activist Jane Goodall joined critics calling on the Edmonton zoo to transfer Lucy to a Tennessee sanctuary last December. However, Goodall reversed her position earlier this month following an investigation from a third-party veterinarian.

Other notables on the list include Pennsylvania’s Pittsburgh Zoo and New York’s Seneca Park Zoo.

Leeds scored 2 goals and scored 2 goals. Man City have 29 shots and 1 goal
Guardiola on the defeat to Leeds: Man City played a very good match. We played solidly, although we made mistakes on the counterattack
Marcelo Bielsa: A City win would be a fair result. It was not me who beat Guardiola, but the players
Man City have 11 points left in 6 matches to become champions of England
Man City lost for the first time in 6 matches. The team was in the majority for the entire 2nd half
Schuster on his favorite clasico: My first one is that we beat Real Madrid. Then I enjoyed playing in the clasico for Madrid
Klopp on Mane: His statistics are not great at the moment, and he is aware of that. I don't care about the situation

Drought, fire and flood devastate Australians in the bush

Mexico receives 1.5 mln does of AstraZeneca COVID-19 vaccine from U.S.

Cargo ship stuck in Suez Canal has been partially freed

Japan’s vaccine minister says inoculation pace to accelerate in May

Indonesia Pertamina aims to restarts refinery in days after blaze

No. 6 USC hammers No. 7 Oregon to reach West final

Sixth-seeded Texas knocks off No. 2 Maryland

COVID-19: Ottawans 70 and older will be able to start booking appointments Monday

Stranded at sea, coronavirus takes a toll on mental health of sailors

#ICYMI: Coderre for mayor, Guilbault in isolation, other news

Heather Owen and Jason Allsopp: Is it time to give the royal good-bye wave to the monarchy?

Andrea Inness and Gary Fiege: We can protect old-growth forests and forestry jobs at same time