The provincial Special Investigations Unit (SIU) is asking for the public's "continued patience" as it probes the circumstances of an incident near Lindsay, Ont., Thursday where a one-year-old boy was killed and the boy's father and an Ontario Provincial Police officer were hurt.

In a news release issued Friday afternoon, the SIU said a post-mortem examination of the child's body is scheduled for Saturday morning in Toronto. The boy died of a gunshot wound, according to the SIU, but it is unclear who shot him.

"The SIU appreciates the public interest in this tragic case and is doing what it can to get answers to the public as quickly as possible while ensuring that the integrity of the investigation is not compromised," the provincial police watchdog said in a statement.

The incident occurred in the City of Kawartha Lakes in the area of Pigeon Lake Road, also known as Kawartha Lakes Road 17. The area is about 130 kilometres northeast of Toronto.

At a news conference Thursday afternoon, SIU spokesperson Monica Hudon said OPP officers were made aware that a father had abducted his son from the municipality of Trent Lakes.

Hudon said officers located a vehicle — a pickup truck — on Sturgeon Road and attempted to stop it. That's when the truck collided with an OPP cruiser and another vehicle on Pigeon Lake Road.

An OPP officer who was reportedly standing outside his vehicle at the time was seriously injured in this collision.

Three officers shot at the 33-year-old driver. He was later airlifted to hospital in serious condition.

The SIU said Friday the child's father is in a Toronto hospital. The OPP officer who sustained serious injuries is also in hospital in stable condition.

Tom Deciccio, who lives in Bobcaygeon, told CBC News that sometime between 8:30 a.m. and 9 a.m. Thursday, some people came running across his deck to his back door and asked to be let in.

He said there was a woman, her three-year-old and the woman's mother-in-law.

"They were quite upset, so we let them in," he said.

They got in contact with police, and a couple of hours later officers showed up at his home. 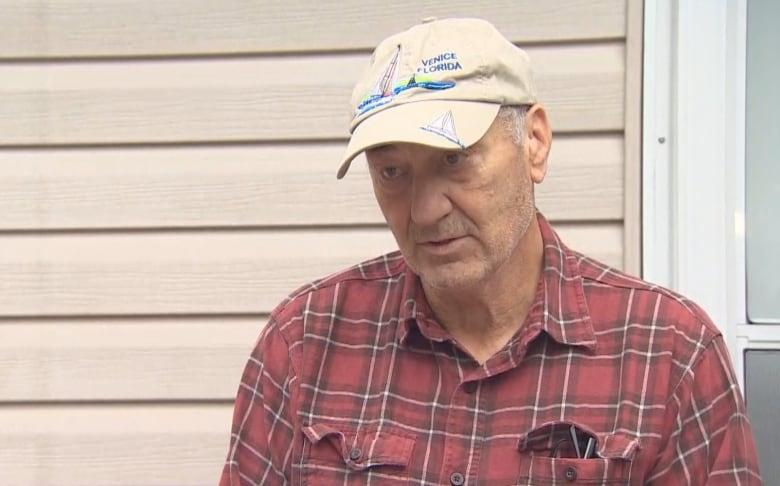 Bobcaygeon resident Tom Deciccio said two women and a child ran to his back door and asked to be let in Thursday morning. (CBC)

"They came and informed the lady that her young son was deceased," Deciccio said.

"It was awful. She was really upset."

SIU investigators said they have collected three police-issued guns from the scene of the incident, which will be sent to the Centre of Forensic Sciences for analysis.

A handgun was also found in the pickup truck, and investigators are "in the process" of "taking possession" of it, according to the news release. The truck will also be sent to the Centre of Forensic Sciences to be examined.

The SIU has identified three officers who are being investigated in connection with the incident. There are also 13 witness officers linked to the case, the unit said.

Two civilian witnesses have also been interviewed, according to the release.

The SIU is asking anyone with information about the incident to contact the lead investigator at 1-800-787-8529.

It is also asking anyone who might have video of what happened to upload it through the SIU website.

Cagliari have extended their contract with Di Francesco until 2023. The club has 7 consecutive defeats
Girona posted a meme with a cat dancing to the polka after the victory over Espanyol
Levandovsky has 500 goals in his career. Only Ronaldo, Messi and Zlatan have scored as many of the current players
Real Madrid director Butragueno on Modric: Such players make football better. The fact that he is in our team is a luxury
Neymar has included Zlatan, Beckham, Buffon, Weah and seven Brazilians in the PSG legends squad
Greenwood is the youngest scorer of the goal against Liverpool for Manchester United after Rooney
Barcelona without Messi does not lose 12 matches in a row
Source https://www.cbc.ca/news/canada/toronto/lindsay-shooting-1.5819987?cmp=rss

222 new COVID-19 cases in Manitoba, more than half in north

Biden vows to work with Canada on 'Buy American' policy, but offers no guarantees

COVID Cases Dropping But Too Early To Ease Restrictions: Tam

‘No ice is safe ice’ during snowmobiling season: OPP

Trapped for 2 weeks, 11 workers rescued from gold mine in China

Ontario reports 2,417 new cases of COVID-19 and 102 more deaths related to the virus