An asteroid on a collision course with Earth broke up after entering the atmosphere over southern Africa on Saturday just eight hours after it was discovered.

At just two metres across, the asteroid was too small to pose a threat to any cities or towns and was expected to safely disintegrate as it entered Earth's atmosphere.

Most of it did burn up, however, scientists think it may have produced meteorites along its path as it descended, with a larger piece believed to have landed near Namibia or Botswana.

Preliminary data suggests that asteroid 2018 LA entered the atmosphere at roughly 15 kilometres/second (or 54,000 km/h) and released energy equivalent to a half-kiloton of TNT.

Small asteroids are difficult to detect and impact Earth more often than many may realize, according to Peter Brown, a physics and astronomy professor at Western University who specializes in meteor science.

"It's the sort of thing that happens about every month or two," Brown said. "It's not that unusual."

But the circumstances around 2018 LA were unusual for two reasons.

First, the asteroid crashed into the atmosphere over land, where people could witness it disintegrating as a bright fireball in the sky. (Because the Earth's surface is mostly water, with large, unpopulated or sparsely populated areas, chances are an impact would go undetected.)

And second, these small asteroids are often identified only after they enter our atmosphere, picked up by the International Monitoring System, part of an organization designed to monitor infrasound — or low-frequency sound waves — in the atmosphere.

Astronomers need long-term data to accurately determine the trajectory of asteroids and, as 2018 LA had just been identified, they didn't have much to go on.

Using what information was available, however, they were able to roughly calculate where it would enter Earth's atmosphere: In a swath stretching from southern Africa, across the Indian Ocean to New Guinea.

With more telescopes pointed at the asteroid, it became apparent that there may be an impact, Brown said.

By early Saturday evening local time (12:44 p.m. ET), there were reports of a fireball in the sky over Botswana, which lined up with calculations made by scientists. It was captured on webcams in the area as it lit up the sky.

Only twice before has a small asteroid been detected hours before colliding with Earth. The first was 2008 TC3, which was detected 15 hours before it broke up over northern Sudan on Oct. 7, 2008. The second was 2014 AA, discovered only a few hours before it impacted over the Atlantic Ocean on Jan. 1, 2014. 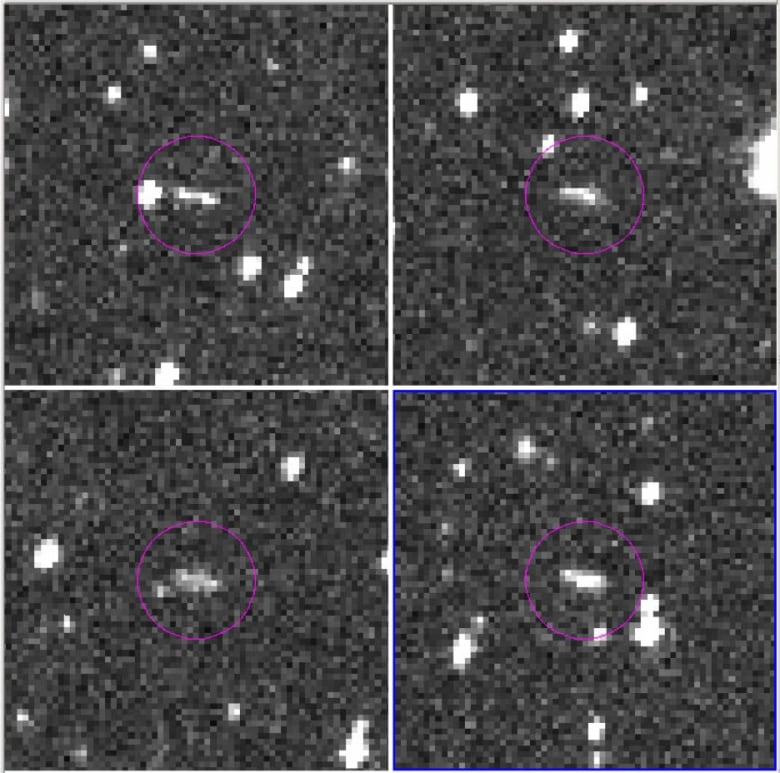 Discovery observations of asteroid 2018 LA taken from the Catalina Sky Survey early Saturday are shown. About eight hours later, the asteroid entered Earth’s atmosphere and much of it disintegrated over Botswana. (NASA/JPL-Caltech/CSS-Univ. of Arizona)

And while 2018 LA was discovered shortly before it arrived at our atmosphere, there are numerous organizations searching for potentially hazardous asteroids (PHAs) that could seriously impact life.

Smaller objects are fainter and more difficult to spot in a large sky, though efforts like the NASA-funded Catalina Sky Survey are increasingly able to search a wider field of sky to find these somewhat elusive objects.

Asteroids are large debris left over from the formation of our solar system. Most are located in the asteroid belt between Mars and Jupiter, but occasionally some can get jostled out of their orbit, posing a threat to Earth.

According to NASA, however, about 90 per cent of all asteroids larger than one kilometre have been discovered.

Considering the short time available to scientists using telescopes around the world to track and calculate the impact of asteroid 2018 LA, Brown called the results successful.

"It's really tough to do," said Brown. "In general, I'd say the system worked pretty well."

Kike Setien: Barcelona didn't play a great match. Espanyol played well in defense
Andujar Oliver on deletions: Fati went too far in the foot, and the foul on the Peak was even more dangerous, perhaps
Atalanta extended the winning streak to 11 matches, beating Sampdoria-2:0
Milner played his 536th game in the Premier League and was ranked in the top 5 of the League in games played
Barca midfielder Fati is removed in the Derby with Espanyol. He spent 5 minutes on the field
Suarez scored 195 goals for Barcelona and finished third in the club's top scorer list
Daniele de Rossi: People call Messi cowardly, but they are afraid to ask their wives for a remote control from the TV
Source http://www.cbc.ca/news/technology/small-asteroid-collide-earth-1.4690562?cmp=rss

Dr. Patrick Smith: Moral injuries from COVID-19 threaten frontline workers but damage can be reduced if we act now

Players raise fists, take a knee prior to return match

REM construction ramps up amid parking and graffiti concerns

George Floyd told 'it takes … a lot of oxygen to talk' during arrest, transcript reveals

LILLEY: Trudeau remains clueless on his role in WE fiasco

Coronavirus pandemic could push 122 million to brink of starvation: Oxfam

Scrabble association prepared to remove ‘offensive’ words from board game