Many Black artists may have originated in and around Toronto, but Black representation in industry boardrooms, along with planning and creative positions, is still sorely lacking — a problem the city, along with several partners, aims to remedy.

“A lot of times we reference The Weeknd and Drake and Daniel Caesar and a lot of amazing artists,” said rapper Kardinal Offishall, “but a lot of those artists are all exports and what we need to do, we need to keep that talent in Canada.”

Offishall includes his name on the list of Black artists who had to search for success south of the border, due to systemic racism within the music industry, which he said needs to change. A big part of addressing that, he said, is to see Black culture represented in senior leadership areas.

“The way to do that, is we need to make sure that we have the resources here, we have the infrastructure, and that people pay as much (time) to those up and coming musicians as we do with every other genre,” said Offishall.

Mayor John Tory said Toronto residents have been proud of local Black artists who have gone onto great success in national and international settings.

“We can’t be as proud of the lack of representation of people from those very same Black communities in the management, professional and ownership ranks of the music industry here in Toronto,” said Tory.

Tory said a new partnership he announced on Monday marks the beginning of initiatives to address the issue by supporting the entry, retention and advancement of Black professionals in the industry.

The $2-million investment will see the City of Toronto and the Slaight Family Foundation provide funding over the next four years.

Partnering with Advance, a collective for Canada’s Black music business, the goal is to support Black talent development in the local music industry. The hope is to see a shift in the music industry, which has seen major success driven by Black artists, but a lack of Black representation in management and executive roles.

Along with providing internship, mentorship and education opportunities, the program will also look to form an advisory group. It will help analyze and assess racial discrepancies in the music industry. The program will be reviewed in 2022 to see how successful it has been, including how it aligns with the city’s Confronting Anti-Black Racism Action Plan.

“We’ve had great success with a program like this for young, Black people in the film industry,” said Tory, adding that he expected no shortage of partners who will step up with the music initiative.

Already, Universal Music Canada has added its name to that list.

“I want to see as many internships as humanly possible, in all sectors,” said Advance board member Vivian Barclay. “Everything from agencies to the labels and publishers.”

Barclay is a music publishing executive in Toronto, a position she said she was unique to hold in Canada as a Black woman. 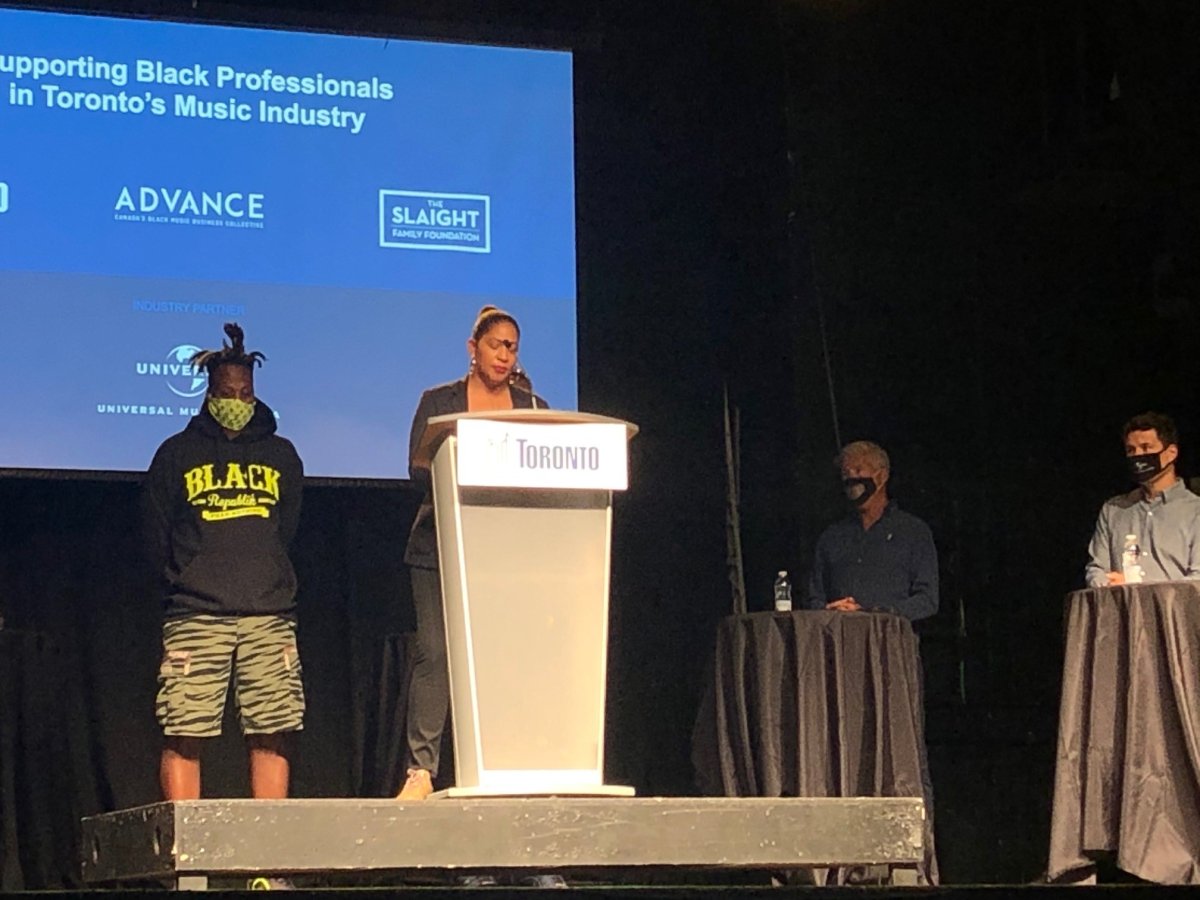 Vivian Barclay said the partnership will require industry leaders to refocus their attention away from traditional institutions and look closer at smaller, community programs instead.

“I’m the only Black person in my position in Canada,” she said. “I’ve always said if you want to see another me, you have to make changes very early on.”

In order to achieve that, Barclay said you need to let more people through the front door.

One of the biggest obstacles in Canada she said, is that smaller, community programs don’t have access to the internships recognized by large companies.

“A lot of people come to Black music through an entrepreneurial space, they don’t come necessarily through a third, tertiary institution or college or a formal education,” said Barclay.

That leaves a whole segment of people who want to get into the industry “without a runway to get in,” she said.

“This is the type of thing even as an artist,” said Offishall, “we’ve been fighting for in this country for, you know. at least 20 to 30 years.”

The announcement of the city’s partnership, he said, while only a first step, was still a “tremendous step.”

Morata passes medical at Juventus
Simeone plays a key role in the transfer of Suarez to Atletico
The Agent Of Gareth Bale: In real Life, Gareth was treated differently. I hope there will be no question of a return
Micah Richards: People write: Richards only works live because of BLM. I achieved this through hard work
The former Director of Barca: Martino said Messi: I know that if you call the President, he will throw me out
Liverpool are in contact with Mbappe's entourage and will compete for him with Real Madrid next summer
Carragher on de Bruyne: Next after Messi and Ronaldo. This is the best player in the Premier League
Source https://globalnews.ca/news/7263356/toronto-black-music-industry/

Already battered, Alberta braces for the energy transition — can it also embrace it?

Sacrifices vs. safety: Why some families are keeping their kids home from school

No. 6 LSU (finally) set to kick off title defense

U.K. PM to urge people to work from home if they can as coronavirus cases spike

Mariners not giving up yet in hunt for Astros

‘Work from home’: Johnson starts to shut down Britain again as COVID-19 spreads

Afghan woman prays that peace will save her fourth husband

‘Work from home’: Johnson starts to shut down the UK again as COVID-19 spreads

Intel gets U.S. licenses to supply some products to Huawei

No cruise control for Matheny’s Royals vs. Cardinals

Reds getting Gray back vs. Brewers in playoff push

Tennis-Quick turnaround helped me get past US Open shock: Djokovic

Alberta’s government house leader to advise Speaker to call MLAs back on Oct. 20

Braves hold off Marlins, close in on NL East title

Quest for Trump’s tax returns based on ‘mountainous record’ of evidence: prosecutor