Trudeau would have been 'better served' to listen to party's old guard, says Chrétien

Former Liberal prime minister Jean Chrétien says Prime Minister Justin Trudeau would have been "better served" if he sought guidance from his party's elder statesmen, but that the current government has failed to reach out to him for advice.

"I'm not there, but sometimes I thought that, you know, they would have been better served if they would have looked to have older, experienced people with them," Chrétien said in an interview airing on Rosemary Barton Live on Sunday.

But, in a forthcoming book, he wrote that while "Trudeau and his team aspire to be reformists on a grand scale … their lack of experience for succeeding in that goal is more and more apparent."

Asked about that remark by CBC's chief political correspondent Rosemary Barton, Chrétien said the current crop of Liberals in Ottawa "don't consult me," and that he is fine with that.

"I'm not there. It's not my responsibility," he said. 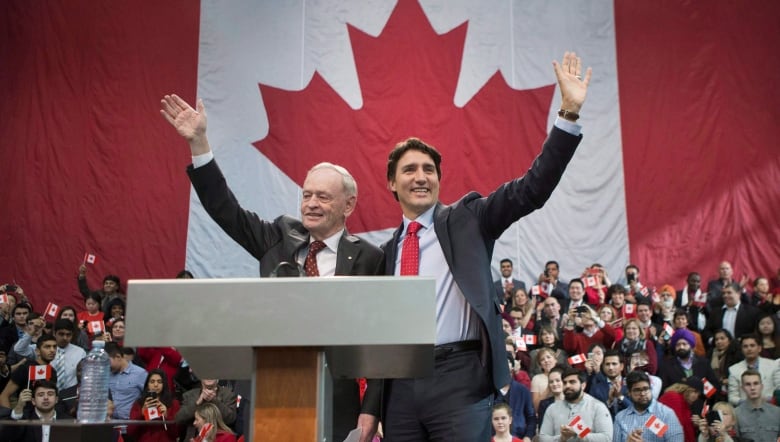 Justin Trudeau, right, and Chrétien stand together on stage at an event to celebrate the 50th anniversary of the Canadian flag, in Mississauga Ont., on Feb. 15, 2015. (Chris Young/The Canadian Press)

Chrétien also noted in his book that rejecting politicians, and the politics of the past, are part of the Trudeau Liberals' identity.

"They say to whoever wants to hear that one of their great successes is in having sidelined the old guard," he wrote in My Stories, My Times, Vol. 2, coming out on Tuesday.

The former prime minister said that the reason he believes in the value of leaning on the previous generation's experience is because he is a product of that kind of thinking.

In 1966, Prime Minister Lester B. Pearson, who Chrétien and others referred to as "Mike," promoted him to parliamentary secretary for Mitchell Sharp, then the minister of finance, who took Chrétien under his wing.

"I benefited from that," he said. "Mitchell Sharpe was selected by 'Mike' Pearson to train me and I think that was rather, perhaps, a success."

Chrétien stressed that he is not criticizing Trudeau's decisions. The former prime minister even campaigned with Trudeau in the most recent election, appearing alongside him at a rally in Mississauga, Ont. He said he is just pointing out that the two men have a very different approach to politics.

"I don't want to pass judgment, you know. For me, it's not my role. For me, I did it differently," he told Barton.

Chrétien also spoke about the challenges of putting together a federal cabinet that draws on the strength of a caucus while being representative of the country.

"It is difficult because you have all sorts of constraints," he said. "You have to have at least one representative from every province and you have the problem of language, of religion, of sex and so on."

"It's very, very difficult. And you know that for one person who is pleased there's ten who are very unhappy … This is a very difficult task and you're alone."

Chrétien reflected on how he crafted a cabinet while sitting at a restaurant table in Korea, scratching out names and portfolios on a piece of restaurant stationary that he has kept as a memento.

"I said to Justin after the second election. I said, 'In a way, you're lucky. I never had a minority government.' For me, who loves politics, I always thought it would be politics at its best," he said.

Chretien, who oversaw three majority governments between 1993 and 2003, said, as a person who likes brokering deals and compromises, he would "have enjoyed having [a minority government], in a way."

U.S. readies fight against Omicron but too soon for lockdowns: Fauci

A beginner’s guide to backstage passes

What remains of the Iran nuclear deal as talks resume?

Police arrest suspect after man is stabbed in Halifax

Fitness: Can you always exercise the pounds away?

Soccer-Burnley v Spurs called off due to heavy snowfall

Missouri has chance to rebound against Paul Quinn

SIMMONS SAYS: Team Canada’s Armstrong has a lot to consider

Greece asks faithful to be COVID-clear to attend church

About Last Night: Habs win 6-3 with front office in flux

Montreal weather: Sunny early, but some clouds in the afternoon

Omicron variant likely to be circulating in France – health minister

There may well be more COVID variant cases in Britain, says health minister