Trump abruptly escorted out of briefing room after security incident outside

U.S. President Donald Trump was abruptly escorted from the White House briefing room Monday after a security incident outside. 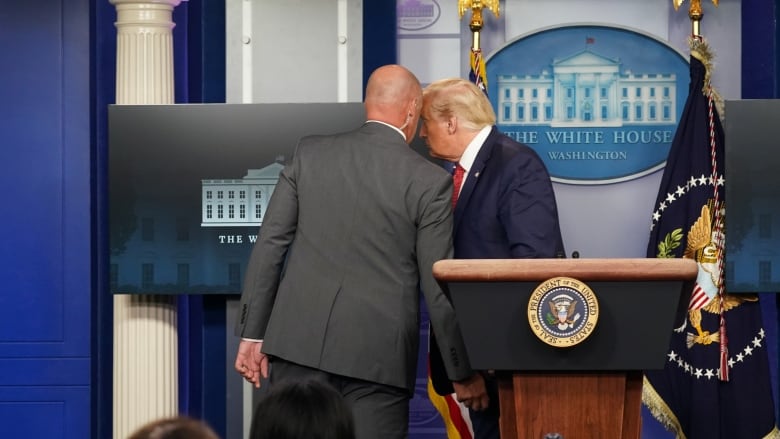 U.S. President Donald Trump was abruptly escorted from the White House briefing room Monday after a security incident outside.

Trump had just begun to speak to reporters when he was interrupted.

He returned minutes later and told reporters there had been a shooting, that he was taken to the Oval Office, and that everything was under control.

Trump said the suspect was taken to hospital after being shot by the Secret Service.

Atletico are in talks with Arsenal to buy out Torreira
Kulusevski scored with the sixth touch and the first shot for Juve-this is crucial in the debut victory of coach Pirlo
Real Madrid was the first in La Liga to release 4 players born in the 2000s
Messi says goodbye to Vidal: I always thought you were a phenomenon. Our paths will cross again
Zidane about 0:0 with Sociedad: Real Madrid lost two points. Overall, we played well
Real Madrid have lost points in 1 La Liga game in 5 of the last 8 seasons as Champions
Andrea Pirlo: I don't want to just copy someone's ideas, I have my own
Source https://www.cbc.ca/news/world/trump-security-briefing-shooting-1.5681325?cmp=rss

Up Schitt$ Creek with a basketful of Emmys

COVID-19: What is forbidden in an orange zone?

Alex Shiff: With B.C. grappling with a worsening pandemic, an early election would be dangerous

Furyk wins at Pebble Beach, is 2-for-2 on Champions Tour

Report: Patriots’ White out after father dies in car accident

Chalk artists say they were questioned by police over critical messages

In SUVs and on planes, richest 1% drive climate-heating emissions

Coincidence and condolence: Dying together in politics

Giants break out in a big way, finally, against A’s

Searchers find body of one of two P.E.I. teens who went missing after boat overturned: RCMP

‘Anything can happen’ pandemic virtual Emmys prepares for liftoff

With post-season looming, Blue Jays need to sharpen up their baseball basics

Golf-‘It is what it is’: Wolff settles for second after charmed U.S. Open run

Cody gets first win as Rangers take out Angels

Searchers find body of one of two teens missing after boat capsized off P.E.I.

‘I needed this so much today’: Saskatoon Valkyries return to field for only time in 2020

‘Honouring the dead’: Calgary police march for fallen and donate to Field of Crosses

EDITORIAL: An appeal for a moderate Throne Speech

Blue Jays break out of skid by downing Phillies

U.S. conservatives blame the left-wing governor. Liberals blame Trump. The Oregon residents who lost everything in fires are in the middle of America’s 2020 left-right divide