Two weeks have been set aside for the trial of the country's former top military commander, an Ontario Crown attorney confirmed today.

The criminal proceeding against retired general Jonathan Vance was adjourned again today. Crown attorney Tim Radcliffe said the case was the subject of a pretrial conference earlier this month involving the prosecution, the defence and the trial judge.

The date for the start of Vance's trial was not revealed today. His case will be back in an Ottawa courtroom on Oct. 29 for further pretrial matters.

Vance was charged by military police in July with one count of obstruction of justice in relation to an investigation into allegations of sexual misconduct.

Today's legal proceedings came one day after Admiral Art McDonald, Vance's successor as chief of the defence staff, issued another public plea to be reinstated. Military police determined there was not enough evidence to charge McDonald in relation to a claim of sexual misconduct made against him.

The allegations of inappropriate behaviour against Vance and McDonald and a number of other senior officers have shaken the military to its foundations.

Vance and Maj.-Gen. Dany Fortin are the only two senior officers swept up in the recent cascade of misconduct allegations to face criminal charges so far. In Vance's case, the obstruction of justice charge does not specifically relate to sexual misconduct. 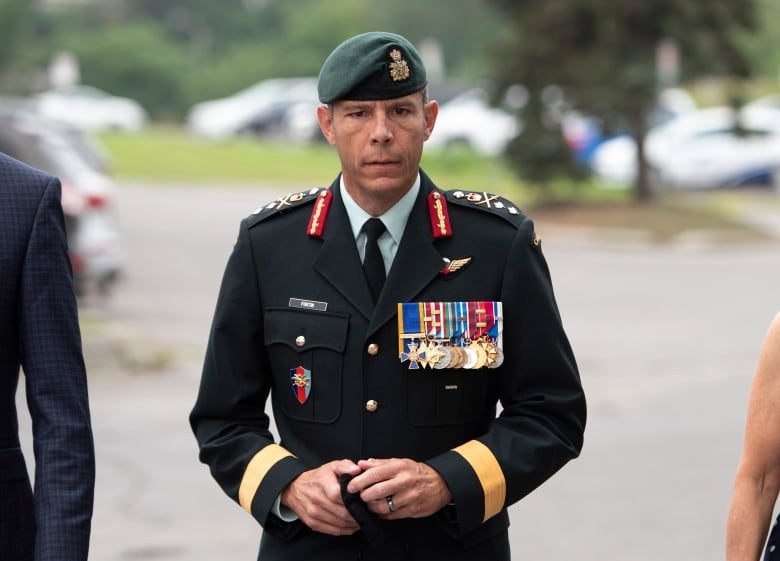 Last summer, the Canadian Forces National Investigation Service (CFNIS) laid the single charge against Vance but did not provide details. The CFNIS said only that the charge relates to events that happened after the military police began investigating Vance over an allegation of misconduct on Feb. 4, 2021.

Brennan, a staff officer at army headquarters, told Global News last winter that she and the former chief of the defence staff had an on-again, off-again intimate relationship. She subsequently testified before a parliamentary committee and claimed Vance had fathered two of her eight children.

Vance has declined to offer comment to CBC News. At the outset of the controversy, speaking to Global News, he denied any wrongdoing. 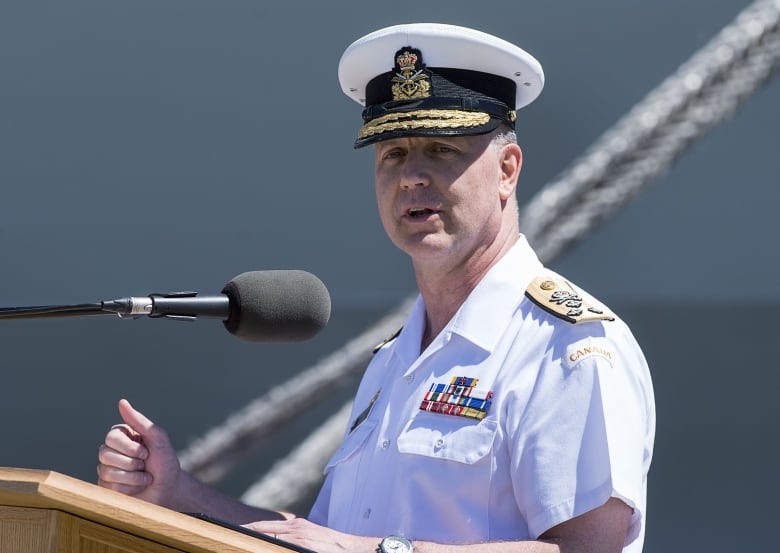 Admiral Art McDonald has been lobbying in public for reinstatement as chief of the defence staff. (Andrew Vaughan/Canadian Press)

McDonald, meanwhile, is now deep into a campaign to win back his job as chief of the defence staff, giving interviews to selected media outlets and reporters outside of Ottawa, including The Globe and Mail and CTV News.

Separately, he circulated a letter to all senior flag and general officers in the military, making the case that he should once again take command. McDonald voluntarily stepped aside in late February after two media outlets — CBC News and the Ottawa Citizen — received tips that he was under military police investigation in relation to a decade-old allegation of misconduct.

"The investigation did not reveal evidence to support the laying of charges under either the Code of Service Discipline or the Criminal Code of Canada," said a statement issued by the Canadian Forces Provost Marshal on Aug. 6.

Instead of returning McDonald to duty, the Liberal government has placed him on leave while his case is reviewed.

'My leadership is ... stronger than ever' — McDonald

In his letter, McDonald claimed that he learned the results of the investigation from the media, that no one in the political establishment or the government has "communicated privately" with him and that Prime Minister Justin Trudeau has rebuffed his overtures for a "dialogue"

He went on to profess his innocence, saying the allegations against him were "unsubstantiated" and that he had done the right thing by stepping aside while the investigation was underway.

"Therefore, I assert that my leadership is now proven stronger than ever," McDonald wrote.

"It is now time for the institution to step up to accept the results of due process."

He said he remains committed "to being an engine of culture change" within the military.

A return to duty is not automatic for McDonald because chiefs of the defence staff serve at the pleasure of the prime minister as governor-in-council appointments.

The acting chief of the defence staff, Gen. Wayne Eyre, described McDonald's letter as "shocking" and said he is serving in the top military commander's post at the direction of the civilian administration.

The letter "changes nothing with respect to our vital work of defending our nation, changing our culture and preparing for the threats ahead," Eyre wrote in his own letter to the military leaders.

"As we work through this challenging period, I ask you to please continue to do what so many of you do each day. Continue to carry out your duties to the very best of your abilities. Lead ethically, morally and professionally. Lead with humility, and with an open heart and mind. We need you. Canada needs you."

Utah’s strong start to second half secures win over Cal

Two critically wounded in Brampton after being shot in car

SIMMONS: Cleared to play, Bethel-Thompson then cleared to disappear in Eastern Division final

No. 10 Arkansas eyes 9-0 start when it faces Charlotte

Calgarians ‘warm up to winter’ at Northwestival

Donovan Mitchell goes for 35 as Jazz hold off Cavs

No. 8 Kansas back in flow with visit from UTEP ahead

In a rut, Warriors look to get back on track vs. Magic

BRAUN: Decriminalizing drugs one step in an ongoing process

‘I never dreamt of this’: Voice of Blue Bombers Bob Irving inducted into Ring of Honour

No. 13 Tennessee to get spotlight test vs. Texas Tech

‘We need to continue action’: Manitobans to hold vigil to honour victims of Polytechnique Massacre

Kingston, Ont. celebrates Hanukkah with the Light Up The Night festival

Chris Cuomo was accused of harassment days before CNN firing

Liquid manure from B.C. floods may have contaminated some Lower Mainland wells

ODDS AND ENDS: Snowed-in pub and other offbeat offerings

EDITORIAL: A holiday break from these stressful times

MALCOLM: What’s the purpose of Canada’s Opposition these days?

When it comes to living in Alberta, half of Canadians outside province aren’t keen to find out, poll finds

Bottcher defends decision to cut third Moulding, says it was about team chemistry

Is it 2022 yet? It has been a rough year for the Royal Family