Hello, royal watchers. This is your regular dose of royal news and analysis. Reading this online? Sign up here to get this delivered to your inbox.

The most recent news regarding Queen Elizabeth focused on her overnight stay in hospital after a trip to Northern Ireland was cancelled (more on that below).

But other headlines of late also reflected a curiosity that has so often surrounded the enigmatic 95-year-old monarch: just what does she really think — about anything?

"Inside the mind of our monarch," one British headline began after a rare moment the other day, when a microphone picked up a few words from a conversation during her visit to the Welsh Parliament. In it, Elizabeth criticized world leaders for a lack of action on climate change ahead of the COP26 summit next month in Glasgow.

"Extraordinary, isn't it? I've been hearing all about COP," the Queen said during the chat that was caught on a livestream.

"Still don't know who is coming.

"We only know about people who are not coming.… It's really irritating when they talk, but they don't do." 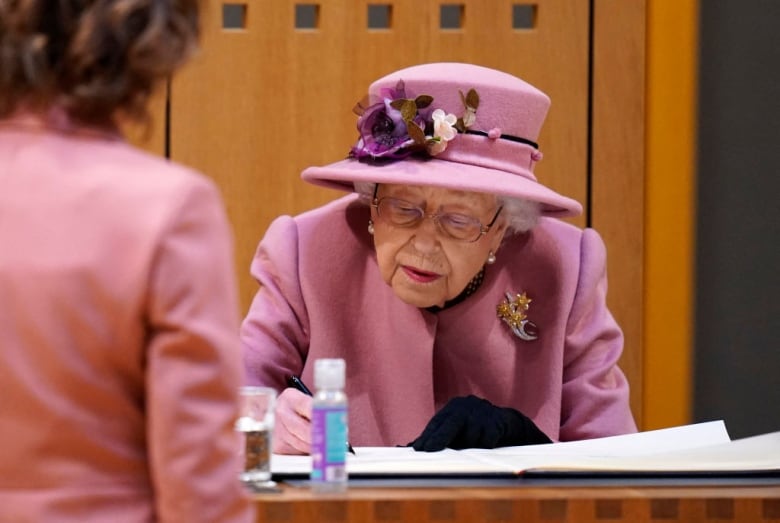 Queen Elizabeth signs a commemorative parchment during the ceremonial opening of the Welsh Parliament in Cardiff on Oct. 14, 2021. (Andrew Matthews/AFP via Getty Images)

All told, very little is known about what the Queen really thinks on issues of the day, political or otherwise.

"Occasionally, some comments such as this get caught by modern microphones, but even then, the Queen rarely says anything that controversial," said Craig Prescott, a constitutional expert at Bangor University in Wales, via email.

Prescott points to 1986, when the Sunday Times reported that Elizabeth was "dismayed by an uncaring Thatcher," with reports from the Palace that the Queen was concerned about the future direction of the government.

"Similarly, in 2012, the BBC journalist Frank Gardner got in some trouble for reporting that the Queen expressed some frustration over why the radical cleric Abu Hamza had not been arrested," Prescott said. 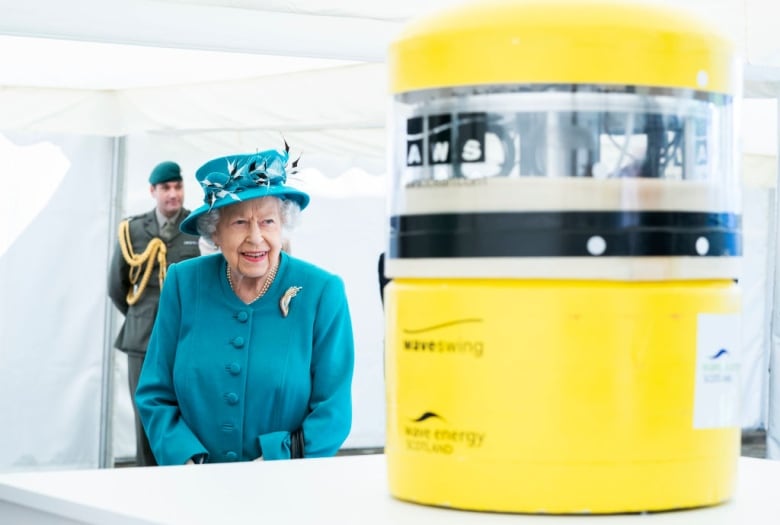 Queen Elizabeth is shown a wave energy converter model during a visit to the Edinburgh Climate Change Institute as part of her traditional trip to Scotland for Holyrood Week on July 1, 2021, in Edinburgh. (Jane Barlow/Getty Images)

That the Queen's comments about climate change made headlines shows how unusual it is to hear her private thoughts on public matters, BBC royal correspondent Sean Coughlan wrote on the network's website.

"This rare insight suggests the 95-year-old Queen remains very engaged with the current issues around the COP26 summit — in a week when Prince Charles and Prince William were also talking about protecting the environment," he said.

One reason it's difficult to determine the Queen's private views is that when she does otherwise speak on topics of the day, her comments would be prepared in advance, on government advice, Prescott said.

Still, there is reason to think she has an interest in environmental matters.

"In her Christmas Day message, when she [speaks] without government advice, [she] has spoken about the importance of the environment as early as 1989," Prescott said.

"She did so again in 2019. So there is a clear interest in environmental issues. It shouldn't be surprising that Prince Philip's longstanding interest in conservation rubbed off on her, as it has done with Prince Charles and Prince William." 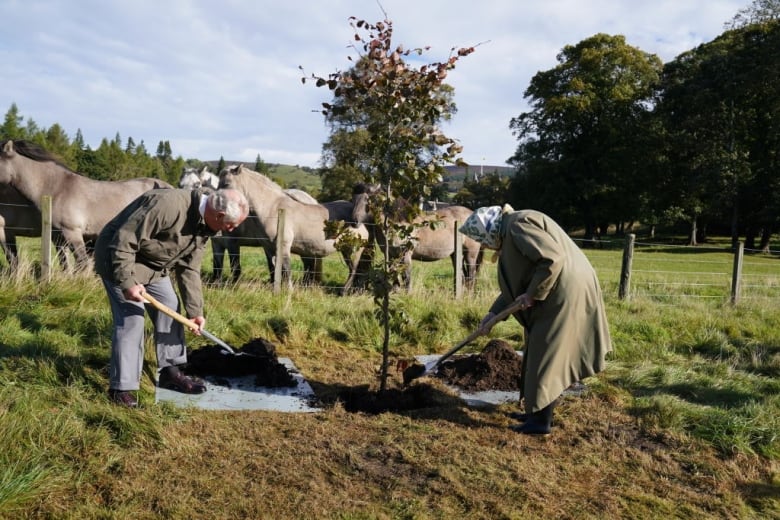 Prince Charles and Queen Elizabeth plant a tree at the Balmoral Cricket Pavilion near Crathie, Scotland, on Oct. 1, 2021, to mark the start of the official planting season for the Queen's Green Canopy project to honour her Platinum Jubilee next year, marking 70 years on the throne. (Andrew Milligan/Getty Images)

The Queen's busy fall calendar — which has drawn considerable attention after the cancellation of her trip to Northern Ireland — has her scheduled to attend COP26, as are Charles and William.

Various media reports late this week suggested royal aides still expect that she will lead the Royal Family at the summit.

'As old as you feel' 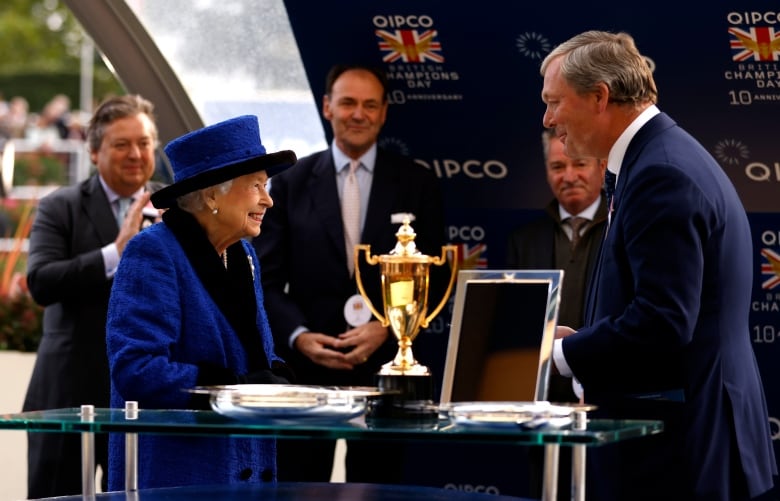 Queen Elizabeth is said to be in good spirits and doing some light duties back home at Windsor Castle after spending a night in hospital.

News of the hospital stay only became public — first through a report in the Sun newspaper — several hours after she had returned to Windsor Castle at lunchtime Thursday.

It's thought to be her first stay in hospital since 2013, and comes a few days after she was seen using a cane at public engagements for the first time since doing so after a knee operation in 2003.

WATCH | Queen Elizabeth uses a cane during a visit to Westminster Abbey:

The hospital stay for tests also came after the planned visit to Northern Ireland was called off at the last minute, when Buckingham Palace said the Queen had "reluctantly" accepted medical advice to rest for a few days.

And it came after what was seen by many observers as a very full schedule of public events for the 95-year-old monarch. (Those events included meeting Canadian soldiers who have been doing ceremonial duties in London and Windsor.)

"She has been busy — busier than perhaps we might have expected her to be. So, given her age, it's not a great surprise that there will be short-notice cancellations or postponements," Joe Little, managing editor of Majesty magazine, told The Guardian after the Northern Ireland trip was called off. 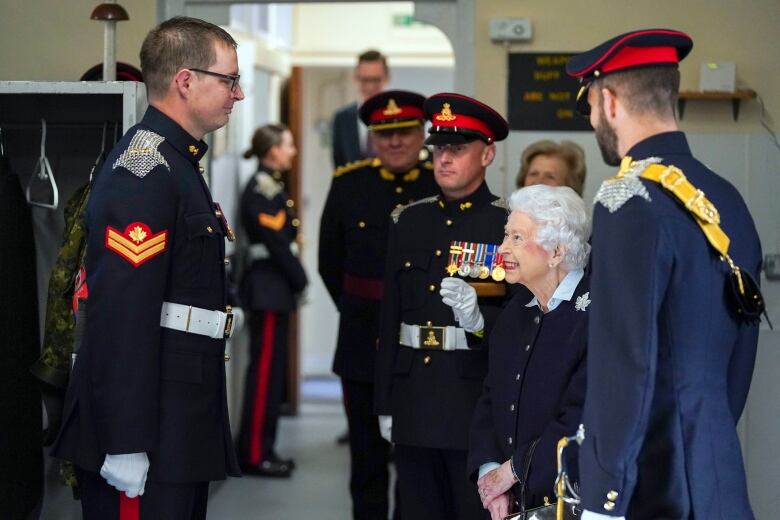 As much as recent events might not be unexpected for someone who is 95, it's clear that the Queen herself isn't interested in any public attention on her age.

The Oldie Magazine wanted to honour Elizabeth by naming her "Oldie of the Year," but, through her office, she politely declined.

"Her Majesty believes you are as old as you feel, as such the Queen does not believe she meets the relevant criteria to be able to accept," her office said.

"There's a sense that the Queen doesn't want to countenance becoming 'old' at all, and there's great reluctance to 'slow down' in any way," said Prescott. 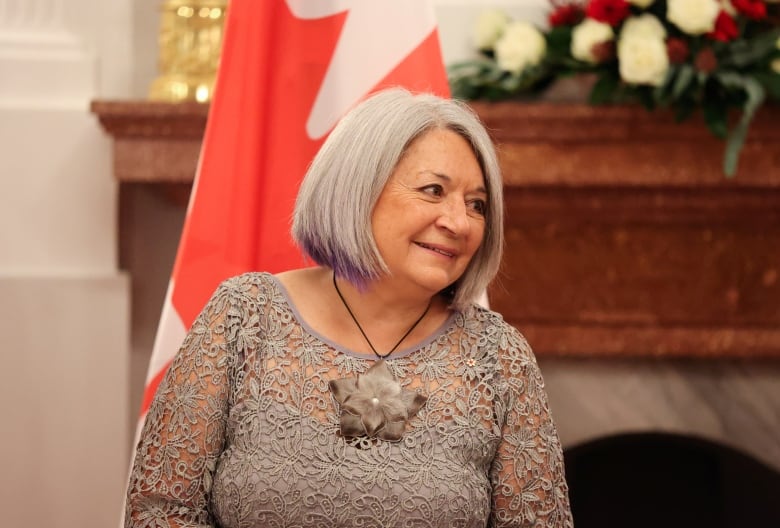 Our friends at CBC Politics had a story this week on Mary May Simon, who gave her first interview as Canada's Governor General. Here is their report:

Gov. Gen. Mary May Simon is promising staff that she will build a positive work environment after her predecessor, Julie Payette, left the job amid accusations that Rideau Hall had become a toxic workplace under her watch.

"I have excellent, excellent relationships with the staff of Rideau Hall," May Simon told the CBC's Pauline Pemik. The interview, which took place at Rideau Hall, was May Simon's first since becoming the representative of the Crown in Canada.

"I reassured [staff] that the workplace is going to be in a way that is positive, forward-looking, and that we are here to serve Canadians," she said.

May Simon became Canada's first Indigenous Governor General when she was sworn in on July 26, inheriting stewardship of an office that had become embroiled in controversy during Payette's final months before resignation.

WATCH | Gov. Gen. Mary May Simon on her priorities and the work environment at Rideau Hall:

Gov. Gen. Mary May Simon speaks to the CBC’s Pauline Pemik about adjusting to her role, the priorities she’s set and changing the work environment at Rideau Hall.

May Simon did not directly address those allegations or Payette's resignation in her interview.

She instead spoke about her own goals as Governor General, which include action on climate change, mental health supports and reconciliation.

"One of the things that I think we really need to work on right away is on reconciliation," May Simon said.

"I think that one of the things we have to understand amongst ourselves is this is not an Indigenous issue, it's a Canadian issue. And everybody has to work together to reconcile the past and move forward."

May Simon also spoke about her initial hesitancy to take on the role, after she had settled into what she called "a slower lifestyle" that allowed her to spend more time with immediate family and her grandchildren.

"That part has been a little bit challenging," she said. "But of course, these things take time to get used to, and I'm getting used to it." 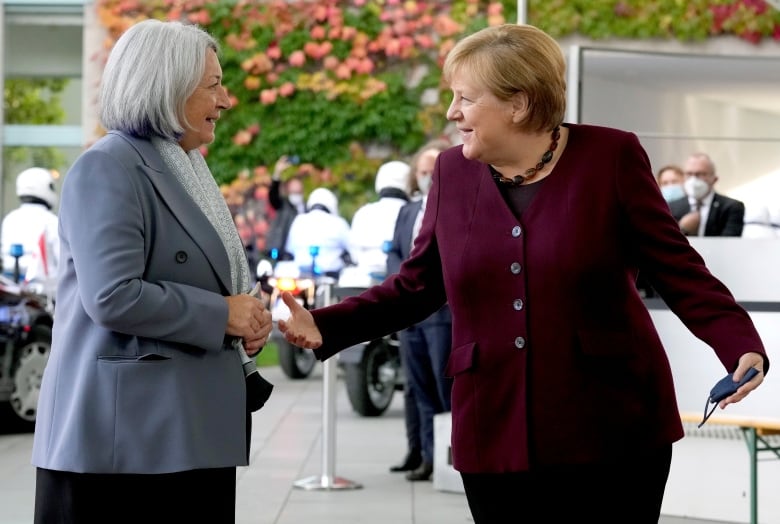 German Chancellor Angela Merkel, right, welcomes May Simon for a meeting at the Chancellery in Berlin on Oct. 18, 2021. (Michael Sohn/The Associated Press)

Moving into the 5,000-square-foot living quarters at Rideau Hall in Ottawa was also an adjustment, May Simon said, because she had recently downsized her home. Payette did not live at Rideau Hall.

May Simon also recalled her initial conversations about the job, when she figured she was just one of many possible candidates.

"But then I kept getting phone calls … saying I was on the shortlist. And lo and behold, I get a call from the prime minister one day offering me the position," she said.

While May Simon — an Inuk from Kuujjuaq in northeastern Quebec — has been celebrated as the first Indigenous person to serve as Governor General, her inability to speak French has drawn hundreds of formal complaints from French-speaking Canadians. 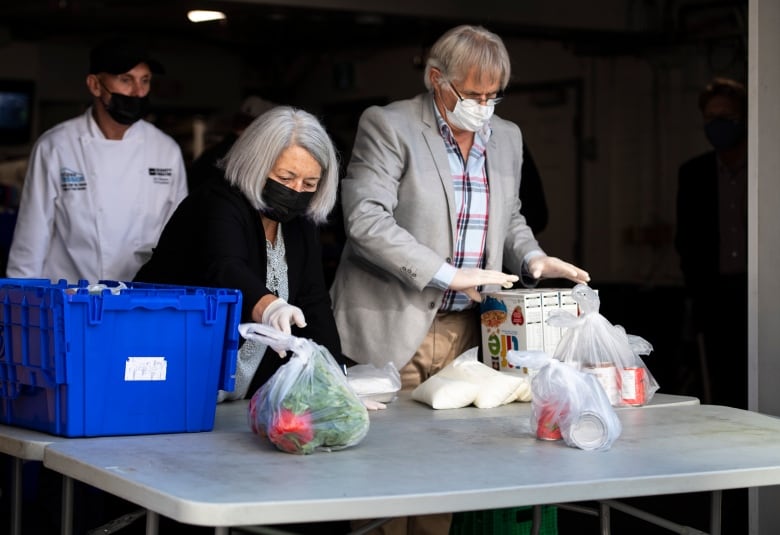 May Simon and her husband, Whit Fraser, right, help deliver meals to clients at the Ottawa Mission on Oct. 8, 2021. (Justin Tang/The Canadian Press)

The Office of the Commissioner of Official Languages is now investigating the nomination process for governors general following the complaints.

But May Simon, who was educated in a federal day school in the Nunavik region, has said she was not given the opportunity to learn French as a child. She has promised to try to learn it.

She is bilingual, speaking English and Inuktitut. 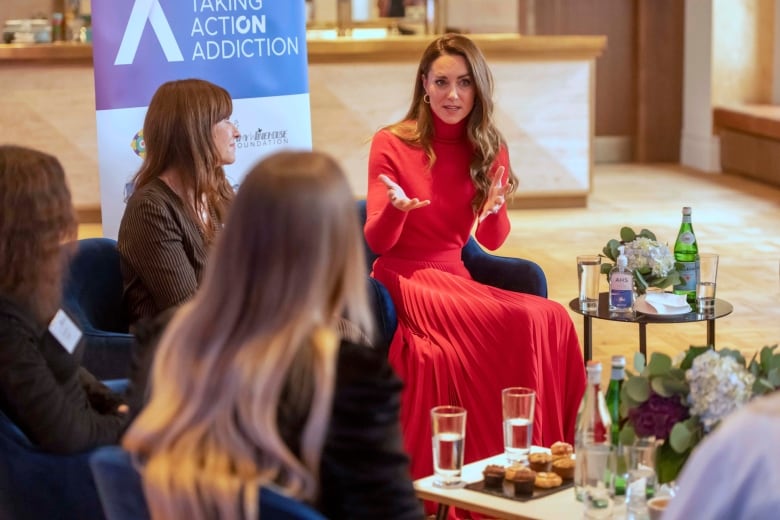 Kate, Duchess of Cambridge, talks to families of recovered addicts at the launch of the Forward Trust's Taking Action on Addiction campaign in London on Oct. 19, 2021. (Paul Grover/The Associated Press)

"Addiction is not a choice. No one chooses to become an addict. But it can happen to any one of us. None of us are immune."

— Kate, Duchess of Cambridge, speaking at an event for drug and alcohol dependency charity the Forward Trust, of which she is patron.

Sign up here to have The Royal Fascinator newsletter land in your inbox every other Friday.

I'm always happy to hear from you. Send your questions, ideas, comments, feedback and notes to royalfascinator@cbc.ca. Problems with the newsletter? Please let me know about any typos, errors or glitches.

Traveller from Canada to Hong Kong confirmed with Omicron variant

Sudan politician freed a month after arrest during coup

Drought, wildfires, COVID-19 drives up deficit in Saskatchewan to $2.7B

Search of Thames River in London, Ont. enters 3rd day over report of person in water

First cases of Omicron COVID-19 variant detected in Canada: What we know

Pellerin: What if snow-clearing prioritized sidewalks and stairs first?

Lee Elder, first Black player at the Masters, dies at 87

‘Tonight’s the night’: Barbados prepares to become a republic

Rupa Subramanya: We are not responsible for low vaccination in the developing world, whatever social justice warriors say

‘Schitt’s Creek’ holiday special: For Jews like Johnny Rose, the menorah is still polished and lit, even in diaspora

Facebook’s rebranding is anything but ‘meta’

LILLEY: Conspiracy theory lies won’t help you through this pandemic

B.C. flood update: Another atmospheric river on the way | Highway 1 closes between Abbotsford and Chilliwack | Merritt upgraded to a flood warning