Propaganda clippings promoting three websites linked to white supremacy and the alt-right movement were littered in front of some North Okanagan schools this week.

The small clippings on white paper, which were hand-cut and just a few inches long, were scattered sometime early Wednesday, during Orange Shirt Day, and were immediately denounced by local officials.

School District 22 superintendent Joe Rogers said most of the clippings, which he called offensive material, were picked up by parents and staff prior to school starting. 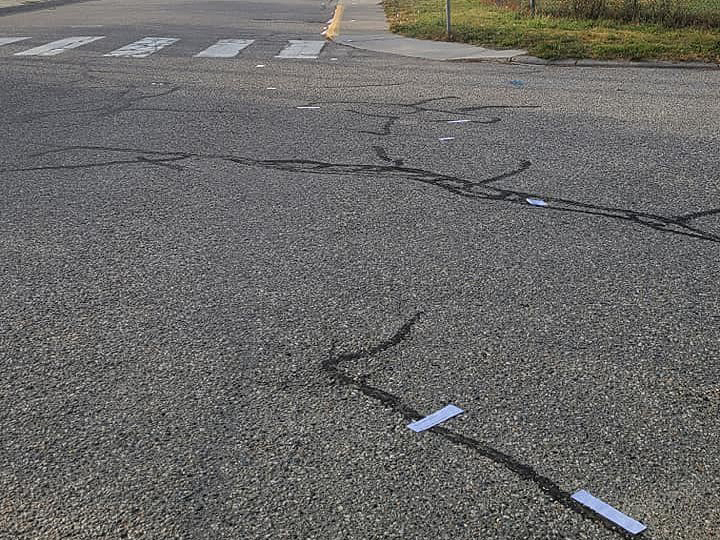 A photo showing clippings littered in front of a North Okanagan school. Submitted

“It is very disturbing that white supremacist website information was distributed on the streets around some of our schools,” said Rogers.

The superintendent told Global News that he was aware of four schools having the clippings littered near them.

“It’s not the first incident of this,” said Louis, adding he believes the first occurrence happened in 2002.

He also said the timing happened “because they’re trying to maximize whatever publicity they’re going to get.”

Louis strongly believes the majority of area residents are against racism, “but there are, and always will be, incidents of this nature. And it’s how we deal with it that how it’s going to be addressed.”

He said continuing education is needed, stating “one thing about bigotry and racism is that they’re based on ignorance. Education is so important. There are so many people who have good minds and don’t support that, so those are the ones we need to turn to.”

Among those denouncing the clippings was Vernon’s mayor.

“Even more concerning is that these notes were strewn about near schools – a place where children and families are meant to feel safe and supported.”

The mayor thanked parents and school district staff who found the notes and “took swift action to clean up and dispose of them, stifling the spread of their messaging. My gratitude runs deep for your immediate response to a despicable act that has had far-reaching impact.”

The Greater Vernon Chamber of Commerce also weighed in.

President Krystin Kempton said the chamber was “saddened to learn of racist material being circulated at local schools, particularly on Orange Shirt Day, when we acknowledge the impact residential schools have had on our Indigenous friends and neighbours.”

Kempton added “we know Greater Vernon to be a caring, open and compassionate community, and we are confident these actions do not represent the majority of residents.

“That said, we must all reflect on what has occurred and be clear that such actions are not acceptable. Racism will not be tolerated in workplaces, schools, sports fields or anywhere.”

‘Incidents’ of racism have been reported in every health region in B.C: Turpel-Lafond

In 2016, a similar incident happened. Then, Vernon North Okanagan RCMP said based on their findings, the clippings did not constitute an offence under the Criminal Code of Canada.

“The flyers do not carry any overt message targeting any specific group or individuals,” police said in 2016, “but do list various websites which may represent extremist groups and individuals.”

Summerland residents welcome discussion around racism in the community

On Thursday, police issued a press release about the clippings, stating several leaflets were turned over to them and that an investigation is underway.

“We share the concerns of the community about the content of the material and specifically the manner in which it has been distributed,” said Const. Chris Terleski.

“Regardless of the outcome, we want to draw attention to the overwhelming, clear and direct response by our community in light of this event. There is no place for hatred of any form, for anyone, and it will not be tolerated.”

Police also confirmed that no suspects were identified in the 2016 incident.

Global News is not listing the websites posted on the clippings.

— With files from Megan Turcato.

Lautaro Martinez: Messi is the best in the world. He is always one step ahead of the rest
The Atletico stadium was painted pink as part of the campaign to fight breast cancer
Frank Lampard: nothing comes easy in the Champions League. This is a great platform to learn new things
Ronaldo was not included in the Juve bid for the match against Dynamo Kyiv
Bruno on the role of captain: I didn't expect it. Tomorrow it's not about me, it's about the team. Everyone should be a leader
Ronaldo, Muller, van Basten, Bergkamp and Cruyff are among the nominees for the best centre forward in history (France Football)
UEFA can expand the Champions League to 36 teams from the 2024/25 season. Each club will play 10 matches in the group stage
Source https://globalnews.ca/news/7372648/propaganda-clippings-north-okanagan/

What the Puck: Bergevin's off-season steers Canadiens onto win-now path

TransLink to remove abandoned bikes from parkades so check your wheels

End of the line for once iconic Tab, Coca-Cola decides

Kingston officials thank students for subdued Homecoming, despite some fines

Alberta legislature to resume Tuesday; focus to be on economic recovery

All reasonable COVID-19 precautions taken during livestream with O’Toole: Kenney

Ashley Graham's Pride In Her Postpartum Body Is So Refreshing

‘We regret that mistakes were made’: Toronto police acknowledge ‘unacceptable’ mass arrests at 2010 G20 protests

No shakeups expected for classrooms

BONOKOSKI: The high life and low lives of Barbara Amiel, a memoir

Michigan WR Collins no longer with the team

Fitness influencer dies from COVID after previously doubting its existence

Baie-D'Urfé mayor to step down in November

Toronto vs. everybody ... or at least the Ontario government