A car drove into a crowd of people in Berlin on Wednesday, killing one person as it veered onto a pavement twice in a district of the German capital popular with tourists and shoppers, police said.

Police identified the driver as a 29-year-old German-Armenian, who eventually crashed the car into a shop window and was detained by bystanders and handed over to the authorities.

Germany's Bild newspaper identified the victim as a teacher who was in the street with a group of her school children.

More than a dozen people were injured, a police spokesperson at the scene in western Berlin said, next to the war-ravaged Kaiser Wilhelm Memorial Church, one of the German capital's best-known landmarks.

Five of the injured were in a life-threatening condition, a fire service spokesperson said.

The man drove into people on a street corner at around 10.30am before getting the car back on the road and then crashing into a shop window a short distance away, police spokesman Thilo Cablitz said.

The driver was immediately detained and was being questioned, Mr Cablitz said.

He added that police were trying to determine whether he had deliberately driven into pedestrians or whether it was an accident, possibly caused by a medical emergency.

"A man is believed to have driven into a group of people. It is not yet known whether it was an accident or a deliberate act," police said, adding that he was being held at the scene.

"We are currently on the scene with about 130 emergency personnel," the police added. "The vehicle, a small car, was secured on site."

The incident happened near the popular Kurfuerstendamm shopping boulevard in the west of the German capital, Berlin police spokesman Martin Dams said.

Mass-selling daily Bild said the man had been driving a small, silver Renault car which was lodged inside a shop after smashing through a plate glass window.

Reuters TV showed a large deployment of fire service and ambulances at the scene, with rescue workers carrying empty stretchers, next to the war-ravaged Gedaechtniskirche church, one of Berlin’s best-known landmarks. 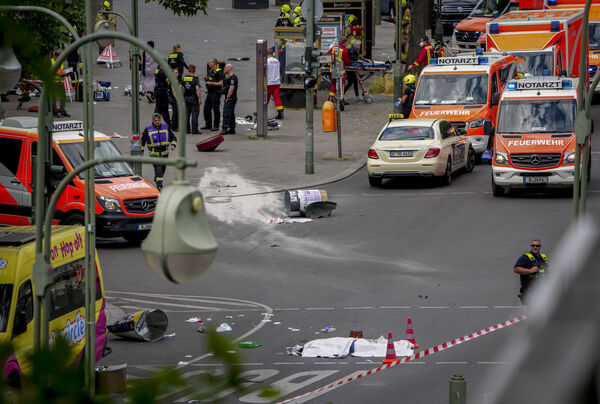 A covered body,foreground, lies on the street after a car crashed into a crowd of people in central Berlin, Germany, Wednesday, June 8, 2022. (AP Photo/Michael Sohn)

Scottish actor John Barrowman posted on Twitter to say that he was in the area of the incident in Berlin when it happened.

In a video posted to his social media, the Doctor Who star said that he heard the “bang and the crash”.

“We were in a store, and then we came out and saw all the carnage,” he said.

“It’s really pretty bad, guys.” Mr Barrowman added: “There’s a lot of police... and over here, there’s all the emergency services that are trying to help victims and people.

“There’s a lot of people walking with limps and injuries.” The actor praised the police for their “unbelievable” presence.

Rescue workers moved apparently conscious people on stretchers towards an ambulance, including one woman sitting up, and another who covered her face with her hand.

The site, on a shopping street near a McDonald's restaurant, was cordoned off. Bystanders looked up at a helicopter circling above.

The incident took place near the scene of a fatal attack on December 19, 2016, when Anis Amri, a failed Tunisian asylum seeker with Islamist links, hijacked a truck, killed the driver and then plowed it into a crowded western Berlin Christmas market, killing 11 more people and injuring dozens of others.