Opinion: Boris Johnson wins confidence vote: but the margin will make him nervous

UK PRIME MINISTER Boris Johnson has survived a “no-confidence” vote by 211 votes to 148 votes against his leadership. But Johnson’s margin of victory is smaller (as a percentage of all Conservative MPs) than that achieved by his predecessor Theresa May in 2019, six months before she resigned and he won the support of the majority of the Conservative Party and took office.

Now, after weeks of speculation during the “partygate” scandal, 40% of his MPs have attempted to vote him out of power.

The no-confidence vote was triggered after 54 (or possibly more) MPs submitted letters to Sir Graham Brady, the chairman of the influential 1922 committee, saying they no longer believed Johnson is the right person to lead the party.

The 148 votes against Johnson means that for the first time the public, and the rebels, know the scale of the opposition Johnson now faces. This figure has virtually trebled from the 54 needed to instigate a leadership contest to 148 who were willing to vote to change leader.

Although not yet sufficient to topple Johnson, it is far from the decisive victory Johnson will wish to present this as and could yet galvanise more calls for him to resign.

The contest was a straightforward yes or no vote. To win the vote, Johnson needed a simple majority of the ballots to be returned in his favour. All of the 369 Conservative MPs took part and Johnson has managed to hold on to the majority. Under the party’s current rules, he will not face another such vote for 12 months.

Including Johnson, four of the five previous Conservative prime ministers have been publicly challenged over their position as party leader, going back to Edward Heath in 1974. And Iain Duncan Smith lost a no-confidence vote as leader of the opposition in 2003.

Their example tells us that winning the vote may not prove to be enough to secure Johnson’s position. May survived a vote of no confidence in January 2019, and both Thatcher and Major faced leadership challenges (although under different rules and after significantly longer in office than either Johnson or May). Remarkably, all three won their respective ballots but both Thatcher and May resigned shortly afterwards and Major went on to lose the 1997 general election by a landslide.

Johnson’s team will hope to use a victory to “draw a line” under partygate and other scandals but this may be difficult to achieve in a party that is publicly as divided as the Conservatives currently are.

Any victory will inevitably be compared to May’s in December 2018. May won her vote by 200 votes (63%) to 117. In order to reach the equivalent level of support, Johnson would have needed to get the support of at least 236 of his fellow Tory MPs. He failed in this.

Had he lost, the Conservative Party would have had to begin the process of electing a new leader and, by virtue of losing the vote, Johnson would have been prohibited from standing in the resulting leadership election.

Now Johnson will remain in office, but the speculation will inevitably intensify as to whether – and for how long – he can survive.

Waiting in the wings are an array of Conservative colleagues who are thought to have leadership ambitions. Among them are several of his cabinet colleagues and other senior Tories, who have either chaired parliamentary committees or held senior posts in previous administrations.

They include Rishi Sunak, chancellor of the exchequer, who was previously seen as a forerunner to replace Johnson. But the cost of living crisis, and a fine for attending the same event that brought Johnson his fixed penalty notice, have seen his personal ratings plummet.

Other prominent cabinet members who are reported to harbour leadership ambitions include the foreign secretary, Liz Truss, who has been loyal to Johnson but is expected to stand should a vacancy arise. 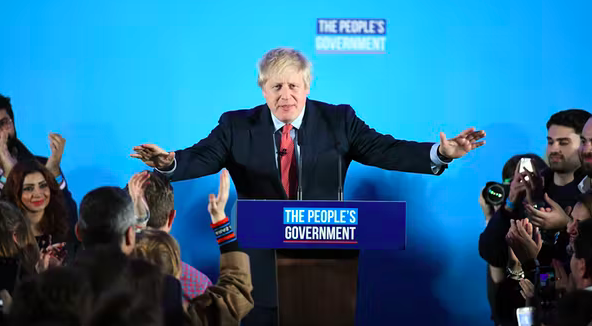 Boris Johnson has always been regarded as an election winner for the Tories. Source: EPA-EFE/Neil Hall

Penny Mordaunt, the minister of state at the Department for International Trade is seen as a possible unifying figure, something the party may well come to increasingly value. Other senior figures tipped as possible contenders include the defence secretary Ben Wallace, the education secretary, Nadhim Zahawi, and the health secretary, Sajid Javid.

Meanwhile, there are heavy hitters outside the cabinet whose attraction is that they could help the party to move on with a narrative of change. One prominent Johnson critic is the chair of the foreign affairs committee, Tom Tugendhat, who was the only figure to publicly state he would run if a vacancy emerges.

Other potential contenders include the former health secretary, Jeremy Hunt, who came second in the members’ ballot behind Johnson in 2019.

But the prime minister remains in post – for now. The next big indicators of the public mood will the two by-elections on 23 June in Wakefield in Yorkshire and Tiverton and Honiton in Devon.

These two very different constituencies, in both of which the Conservatives are trailing in the polls, will be watched very carefully by all 369 MPs as they consider their position going forward.

Christopher Kirkland is a lecturer in Politics, York St John University This article is republished from The Conversation under a Creative Commons license. Read the original article.