AT LAST SOMETHING for Ulster to shout about. After years of underwhelming results in knock-out rugby, this was a scalp to be proud of, a victory that confirms their status as Ireland’s second-ranked province, moving them above Munster in the pecking order and into this year’s URC semi-finals.

A trip to Cape Town or Edinburgh is next. After the quality of this performance, they’ll fancy their chances, not just because of the standard of opponent they took out here, more because they are finally beginning to believe in themselves.

They were slicker, sharper and quicker than Munster and the possessors of the game’s outstanding players in Robert Baloucoune, James Hume, Iain Henderson and Nick Timoney.

As their youngsters delivered and Munster’s veterans aged, it was like watching the future go to conflict with the past. The future – represented by Ulster’s academy graduates, Ethan McIlroy, Stewart Moore, James Hume and Robert Baloucoune – won.

That’s it then for Munster this season. That’s it then for Johann van Graan and Stephen Larkham, full stop. They leave for Bath and Canberra respectively without a trophy to show for their years in Limerick or even an away win in URC/Pro14 play-off rugby. You can’t argue they deserved any better.

Ulster did. Their maul defence was exceptional; their defence in general as good as it has been at any stage of the season. But the real difference between these sides came in attack, Ulster’s passes sticking, Munster’s handling repeatedly letting them down.

It could have been different. There were knock-ons yards from the Ulster line by Josh Wycherley and Niall Scannell in each half; there was the failure of Gavin Coombes to successfully touch it down in the end goal area after he had blocked John Cooney’s attempted clearance; there was the crunching tackle by Baloucoune on Keith Earls that preceded the second Ulster try of the game. 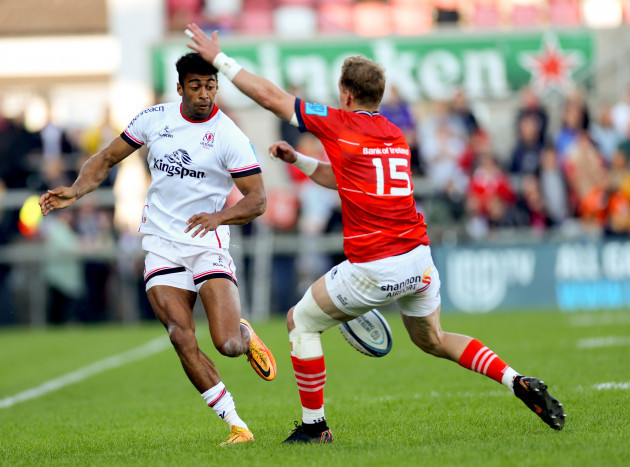 And those moments – Earls getting smashed, Baloucoune subsequently appearing in the line to cut through the Munster defence from the next Ulster attack, proved critical.

For, every time Ulster needed a score, they got one. They were the first to touch down in each half; they responded within five minutes of Munster’s opening two scores by getting a try and then a penalty. Whatever question was asked, they answered.

We sensed as much after the opening ten minutes – a period when Ulster dominated territory before eventually gaining access to the Munster 22 following some tidy work by Nick Timoney at the breakdown. From there, they shifted up a gear; referee Jaco Payper awarding them a penalty after Munster collapsed the maul.

A scrap subsequently broke out, drawing five Munster players away from their defensive line. Billy Burns turned down the invitation to have a ringside seat at the boxing, choosing instead to take a quick tap and zip a pass wide to Cooney. He raced in unchecked before dusting himself down to slot over the conversion; 7-0 to Ulster.

Chris Farrell (twice), Joey Carbery, Stephen Archer, Niall Scannell, Jean Kleyn all made incisive carries to get them into the Ulster 22 – as Conor Murray orchestrated affairs cleverly and rapidly from the base of rucks, choosing the right option repeatedly, eventually staying out of the way as Kleyn made his second carry to get over from close range.

So, 7-7, and the Munster attacks kept coming. Ulster had a plan for them, though, a try-saving tackle from Baloucoune on Earls getting the crowd going. The next move got them off their feet – a set-piece play off a line out, Alan O’Connor collecting Rob Herring’s throw before he sat back and watched the magic unfold. There was Stuart McCloskey’s pass out the back; Baloucoune’s break and perfectly timed pass; McIlroy’s offload, Moore’s finish. Another Cooney conversion made it 14-7. 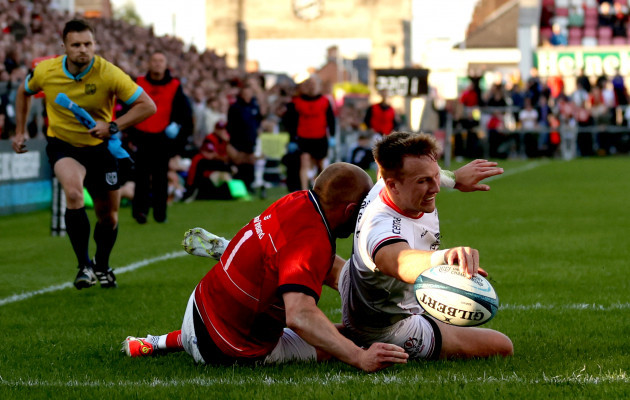 And that was the game summed up – Ulster taking their chances, Munster wasting theirs, one wayward pass from Murray to Carbery forcing the visitors to exit the Ulster 22. It was just one of those nights.

For Ulster, it was a great one. Carries from McCloskey, Tom O’Toole, Duane Vermuelen, as well as clever link play from Billy Burns and a slick pass from Hume led to Moore’s second try.

Soon after the restart Timoney got a deserved try.

There was no let-up. Earls got across for two tries – the first a beauty – but Ulster scored next both times, Cooney with a penalty after the first Earls try, Hume – the deserved player of the match – getting a score after some fine footwork.

Amid all this Munster never stopped trying. Their problem was they never started playing.