A couple in their 50s were found stabbed at an apartment in Haifa on Sunday in a suspected murder-suicide attempt.

Paramedics were alerted to the scene at 9:15 a.m., and discovered two people with stab wounds: a woman in critical condition and a man in serious condition, both of them unconscious.

The two were taken to the city’s Rambam Medical Center while first responders performed CPR on the woman, according to a statement by Magen David Adom.

Police have opened an investigation.

Initial findings indicate that the two were stabbed, police said, adding that they were looking into the possibility that the man had stabbed his wife before trying to commit suicide by stabbing himself.

In March, police arrested a man after he allegedly tried to kill his wife by electrocuting her with jumper cables. She woke up feeling the metal clamps on her neck and called the police after managing to escape the house. 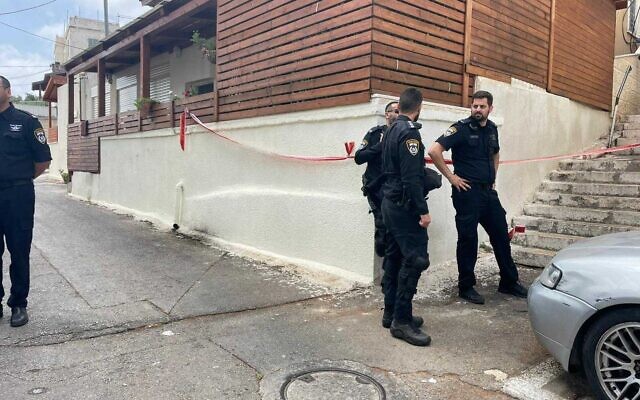 Police officers at the scene of a suspected murder-suicide attempt in Haifa on June 12, 2022. (Israel Police)

According to a report published by researchers at the Hebrew University of Jerusalem in January, there were 16 cases of women murdered in Israel by a relative or a partner throughout 2021, and 21 cases in 2020.