“If Netanyahu harms the national interests of the State of Israel, if he harms Israeli democracy, state education, and the Israel Defense Forces’ status as the national army — the way to deal with this is to get a million people onto the streets,”  Eisenkot told the Yedioth Ahronoth newspaper in excerpts published Thursday, adding that he would be among the marchers.

The full interview will run over the weekend.

The former military chief’s comments come amid the demands of the far-right and religious parties that are expected to join Likud in making up the next government, including to drastically weaken the independence of the judicial system and to transfer authority over some content at Israeli schools to anti-LGBT lawmaker Avi Maoz. This week has seen attacks by far-right lawmakers, particularly Otzma Yehudit chair Itamar Ben Gvir, against an IDF officer who punished a soldier filmed taunting left-wing activists in Hebron last week.

Eisenkot described the world as upside down after the offending soldier received the support of several Knesset members.

“I condemn the cynical exploitation of Ben Gvir and the like. We can’t allow a situation where soldiers don’t want to serve in combat because of the way soldiers are treated by parties with an agenda,” he said.

“Anyone who brings the IDF into political discourse weakens the army over the long term for short-term political gain,” he said. 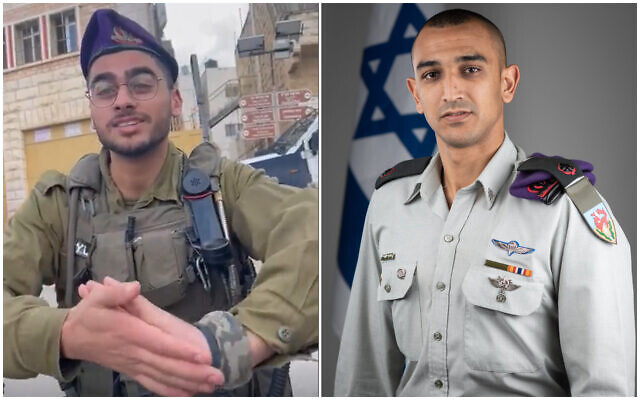 A Givati soldier (left) is seen confronting an activist in the West Bank city of Hebron, November 25, 2022, and then-Maj. Aviran Alfasi (right), now the commander of the Tzabar batallion, in April 2019. (Screenshot: Breaking the Silence; Israel Defense Forces)

The soldier, who was recorded boasting how Ben Gvir was going to instill order in the flashpoint city once he takes office, shoved a journalist and shouted, “I don’t like leftists and I will break their [bones],” was sentenced this week to 10 days in a military prison for improper behavior.

The Otzma Yehudit chair protested the punishment, saying the commanding officer had “crossed a red line.” Shortly thereafter, the officer’s identity was leaked on social media, whereupon dozens of far-right accounts tore into him and called for his discharge.

In coalition negotiations, Netanyahu has agreed to give Ben Gvir the new role of national security minister, with authority over the Israel Police and the Border Police’s West Bank division.

Eisenkot faced his own clash with politicians when he was chief of staff in 2016 after IDF soldier Elor Azaria shot and killed an already-subdued Palestinian attacker, Abdel-Fattah al-Sharif, who had stabbed an Israeli soldier in Hebron.

Azaria was sentenced to 18 months in prison for the shooting, which was filmed, though he only served half of the sentence. In supporting the punishment for Azaria, Eisenkot came under fire from right-wing lawmakers.

“The cowardly position of most of the country’s leaders during the Azaria case must not be repeated. Give backing to the IDF,” he said in the interview. 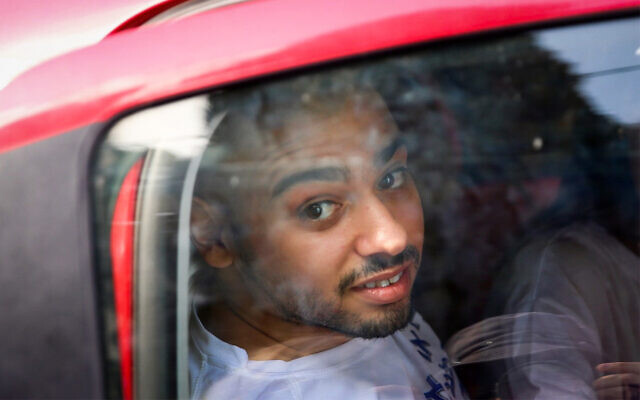 Elor Azaria arrives at a military prison to start serving his sentence, on August 9, 2017. (Flash90)

Eisenkot, who joined the National Unity party ahead of the most recent Knesset election, has become increasingly vocal in his opposition to Netanyahu in recent days.

On Tuesday, he warned that the policies of the incoming far-right government could lead to the breakup of the IDF.

In his interview with Yedioth, he labeled current coalition negotiations as “absolute madness,” and described Netanyahu as someone “riding a tiger” but oblivious to its tail being held by Ben Gvir and Religious Zionism chair Bezalel Smotrich.

Also on Thursday, outgoing Finance Minister Avigdor Liberman told the Ynet news site that Netanyahu “lives with anxiety and suffers from nightmares at night” over his incoming government.

“He walks the Knesset halls and tells himself that he understands the consequences of this government on the political level, economic level, and on the level of our relations with the Diaspora,” Liberman said.

“Because Netanyahu understands the consequences, for me it’s clear that after he passes all the laws that he wants, he will make every effort to throw Ben Gvir and Smotrich out of the government and try to bring in someone from the opposition. It’s not for nothing he is running around the world, giving interviews trying to calm everyone down,” he added, referencing interviews Netanyahu has given in recent weeks in which the Likud leader promised to rein in his far-right partners.

An open letter to Israel’s friends in North America

AG: Netanyahu barred from dealing with judicial overhaul due to corruption trial

A trip to the Moon via feasting and ‘Fauda’ - Sponsored Content