Far-right Knesset members who visited a center for at-risk girls on Wednesday reportedly questioned them about their relationships with Arab men and asked the facility’s staff to increase the level of Jewish content provided to patients.

The line of questioning from MKs Limor Son Har-Melech and Almog Cohen from the Otzma Yehudit party and Religious Zionism MK Michal Woldiger, reported by the Kan public broadcaster Thursday, underlined worries that policies impacting wide swaths of society will be shaped by far-right anti-miscegenation groups set to gain a foothold in the emerging government coalition.

According to the report, the parliamentarians visited the Mesila center in Moshav Ora outside Jerusalem with the permission of the Welfare and Social Services Ministry and also spoke with the parents of the girls, apparently without the facility’s okay.

The facility houses at-risk girls age 12-18 who have left their homes, including some who were subject to domestic abuse.

After hearing of the incident, industry officials told Kan that “dealing with assimilation within such a sensitive framework could damage the girls’ rehabilitation process. There is a concern that a radical right-wing agenda, which is undoubtedly motivated by racism towards Arabs, will penetrate into the treatment” the girls receive.

“Assimilation” is a term used by anti-miscegenation groups and figure activists to refer to sexual relations between Jews and non-Jews.

Otzma Yehudit chief Itamar Ben Gvir, who is slated to be national security minister in the expected next government, is closely allied with Bentzi Gopstein and his Jewish supremacist group Lehava, which has protested Jewish-Arab relationships.

Ben Gvir is a self-described disciple of the late racist Rabbi Meir Kahane — who once proposed outlawing sexual relations between Jews and non-Jews — though he has recently sought to distance himself from some of his spiritual mentor’s most extreme and discriminatory ideas. 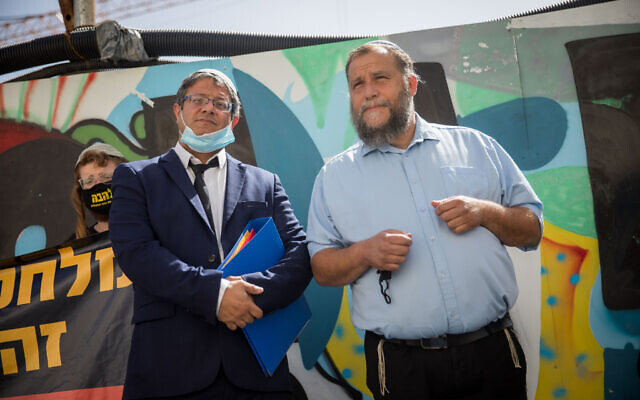 Defending the visit, Cohen claimed the parents of the girls were “concerned and worried for their daughters” and had requested that the MKs visit the facility.

“We came to check and see up close whether the Welfare Ministry had corrected the issues listed in a previous report by the state comptroller,” he said in a statement.

Cohen added that “it’s important to note that some of the girls in the facility were exploited by Arabs and they have nowhere to turn. It’s no secret I’m against assimilation.”

A spokesperson for Lehava claimed it had received “many complaints” from parents of girls at the facility.

“We praise the MKs’ visit of the MKs. To our disappointment, the leaders of the Mesila institution and the media are trying to drive the conversation to another place instead of worrying about the girls,” it told Kan.

In the Knesset and in the streets, the leaders of the Israeli center-left are MIA

US federal jury says Ohio magistrate was fired for being Jewish

2 years after extradition from Israel, Malka Leifer trial set to begin in Australia

Factories with hazardous materials not prepared for earthquakes, ministry warns