PARIS (AFP) — Iran’s President Ebrahim Raisi condemned Wednesday the “chaos” sparked by a wave of women-led protests over the death of Mahsa Amini while in the custody of the Islamic republic’s morality police.

“Those who took part in the riots must be dealt with decisively, this is the demand of the people,” said Raisi in a televised interview.

“People’s safety is the red line of the Islamic Republic of Iran and no one is allowed to break the law and cause chaos,” he said.

“The enemy has targeted national unity and wants to pit people against each other,” added the ultraconservative president, accusing Iran’s arch-foe the United States of stoking the unrest.

Amini, a 22-year-old Kurdish woman, died on September 16, three days after she had been arrested for allegedly breaching Iran’s strict rules for women on wearing hijab headscarves and modest clothing.

Raisi said the nation had felt “grief and sorrow” over her death, and that forensics and judiciary experts would soon present a final report, but also warned that “protests are different to riots.” 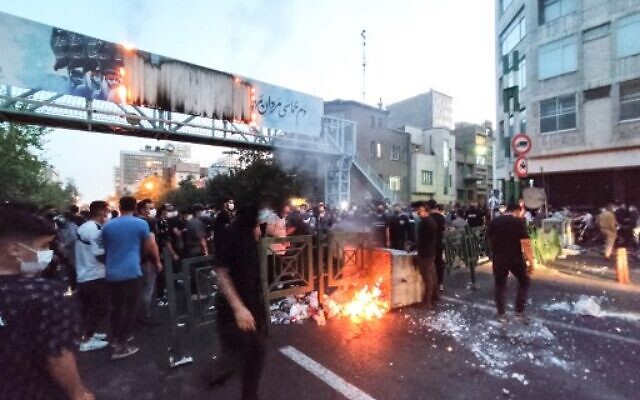 A picture obtained by AFP outside Iran on September 21, 2022, shows Iranian demonstrators burning a rubbish bin in the capital Tehran during a protest for Mahsa Amini, days after she died in police custody. (AFP)

“Woman, Life, Freedom!” the protesters have chanted in Iran’s biggest demonstrations in almost three years, in which women have defiantly burned their headscarves and cut off their hair.

Their actions have been matched in solidarity protests worldwide, with British-Iranian Nazanin Zaghari-Ratcliffe, who spent six years in jail in Iran, cutting her hair in a video shared on the BBC Persian service.

Amini’s bereaved parents have filed a complaint, demanding “a thorough investigation” and the release of “all videos and photographs” of her while in custody, said their lawyer Saleh Nikbakht.

An Iraq-based cousin of Amini, who is a member of a Kurdish nationalist group, charged that she died after a “violent blow to the head” and that one officer had vowed to “instill the rules in her and teach her how to wear the hijab and how to dress.”

As the Iranian protests have flared for 12 nights in a row, Iran’s police command vowed its forces would confront them “with all their might,” in a crackdown that one rights group says has already killed at least 76 people. 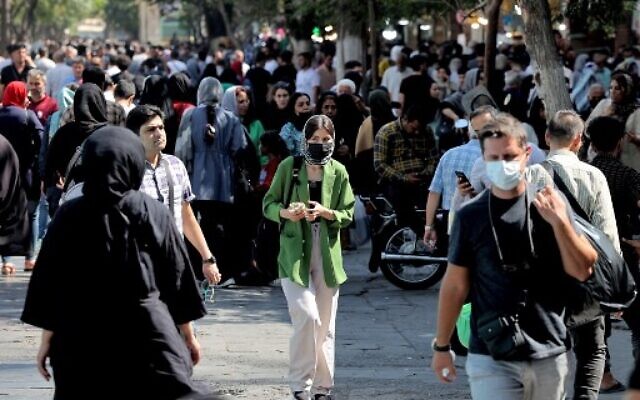 A woman walks with other shoppers at the Grand Bazaar in Iran’s capital Tehran on September 28, 2022. (ATTA KENARE / AFP)

Iran has blamed outside forces for the unrest, including “counter-revolutionary” Kurdish groups based in northern Iraq — across from Iran’s Kurdistan province Amini hailed from, and where the protests first flared.

In a major escalation, Iran on Wednesday launched cross-border missile and drone strikes that killed 13 people in Iraq’s Kurdistan region, after accusing Kurdish armed groups based there of fueling the unrest.

The attacks were condemned by the UN mission in Iraq, and the federal government in Baghdad summoned the Iranian ambassador.

Germany slammed the “escalation… against the backdrop of domestic political protests in Iran” and rejected “attempts to locate the causes of the Iranian protests in the neighboring country.”

The Kurdish Democratic Party of Iran, one of the groups targeted, charged that “these cowardly attacks are occurring at a time when the terrorist regime of Iran is unable to crack down on ongoing protests inside and silence the Kurdish and Iranian peoples’ civil resistance.” 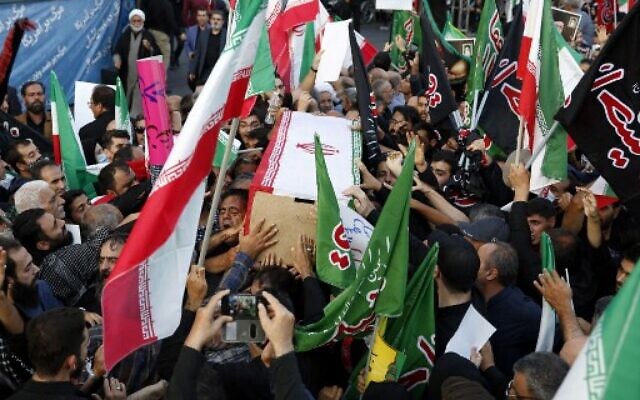 The coffin of a member of the Islamic republic’s security forces is carried as Iranian pro-government protester rally against the recent anti-government protests in Iran, in Tehran, on September 25, 2022. (AFP)

The Iranian government — its economy already hit by sanctions over its nuclear program — has sought to play down the crisis.

Iranian Foreign Minister Hossein Amir-Abdollahian said he told Western diplomats at recent UN meetings that the protests were “not a big deal” for the stability of the clerical state.

“There is not going to be regime change in Iran. Don’t play to the emotions of the Iranian people,” he told National Public Radio in New York, also accusing “outside elements” of stirring up violence.

Fars news agency said Tuesday “around 60” people had been killed since Amini’s death. But the Oslo-based group Iran Human Rights said the crackdown has killed at least 76 people.

Iran’s response has drawn concern from the United Nations and condemnation from the around the world, with Germany and Spain summoning the Iranian ambassadors and the United States and Canada announcing new sanctions. 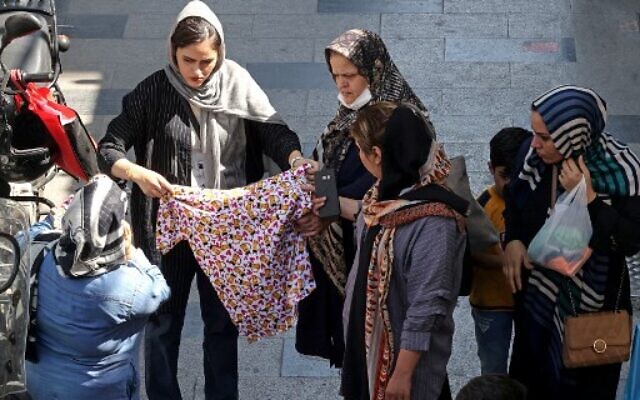 The son of Iran’s late shah, in an interview near Washington with AFP, hailed the protests and urged the world to add to the pressure on the clerical leadership.

Reza Pahlavi, whose father was toppled in the 1979 Islamic Revolution, urged greater preparation for a future Iranian system that is secular and democratic.

“It is truly in modern times, in my opinion, the first revolution for the women, by the women — with the support of the Iranian men, sons, brothers and fathers,” said Pahlavi.

Hours before his wedding, man shot and seriously injured near southern town

A Black writer explores how Germany remembers its ‘unthinkable’ past

Slivovitz, a brandy with a Jewish history, gets UNESCO recognition

Bahrain protesters chant ‘death to Israel’ ahead of Herzog visit

Lithuanian PM introduces bill to set aside $38m for Holocaust survivors, their heirs

Ex-ADL chief Foxman: Israel will lose US Jews if Smotrich and Ben Gvir get their way

Taking aim at Trump, Biden says leaders must call out antisemitism, not platform it

In message to China, US unveiling new B-21 Raider stealth bomber

Study predicts 48% jump in Israelis over 75 by 2030, straining healthcare system