AFP — Iran carried out its first known execution Thursday over the protests that have shaken the regime since September, sparking an international outcry and warnings from rights groups that more hangings are imminent.

Mohsen Shekari, 23, had been convicted and sentenced to death for blocking a street and wounding a paramilitary guard during the early phase of the protests, after a legal process denounced as a show trial by rights groups.

At least a dozen other people are currently at risk of execution after being sentenced to hang in connection with the protests, human rights groups warned.

Demonstrations have swept Iran for nearly three months since Iranian Kurdish woman Mahsa Amini, 22, died in custody after her arrest by the morality police in Tehran for an alleged breach of the country’s strict hijab dress code for women.

The protests, described by the authorities as “riots,” have posed the biggest challenge to the Islamic republic since it was established following the ouster of the shah in 1979.

“Mohsen Shekari, a rioter who blocked Sattar Khan Street in Tehran on September 25 and wounded one of the security guards with a machete, was executed this morning,” it said.

In a sham trial without due process, deprived of the right to appoint his attorney, Mohsen Shekari was charged with “street obstruction.” While his family were still hoping for an appeal and had no news from the case, the Islamic Republic unexpectedly executed him.#MahsaAmini pic.twitter.com/BkV200oTgK

Amnesty International said it was “horrified” by the execution and called the legal process a “grossly unfair sham trial.”

“His execution exposes the inhumanity of Iran’s so-called justice system where many others face “the same fate,” the group said.

Mahmood Amiry-Moghaddam, director of the Oslo-based group Iran Human Rights (IHR), urged a strong international reaction, warning that without a response, “We will face mass execution of protesters.”

“Mohsen Shekari was executed after a hasty and unfair trial without a lawyer,” he said.

Iran’s Fars news agency carried a video report of Shekari talking about the attack while in detention, which IHR described as a “forced confession” with his face “visibly injured.”

Western governments echoed the anger of the rights groups.

Washington called Shekari’s execution “a grim escalation” and vowed to hold the Iranian regime to account for violence “against its own people.”

In Rome, Prime Minister Giorgia Meloni expressed indignation at “this unacceptable repression” which, she said, will not quash the protesters’ demands. 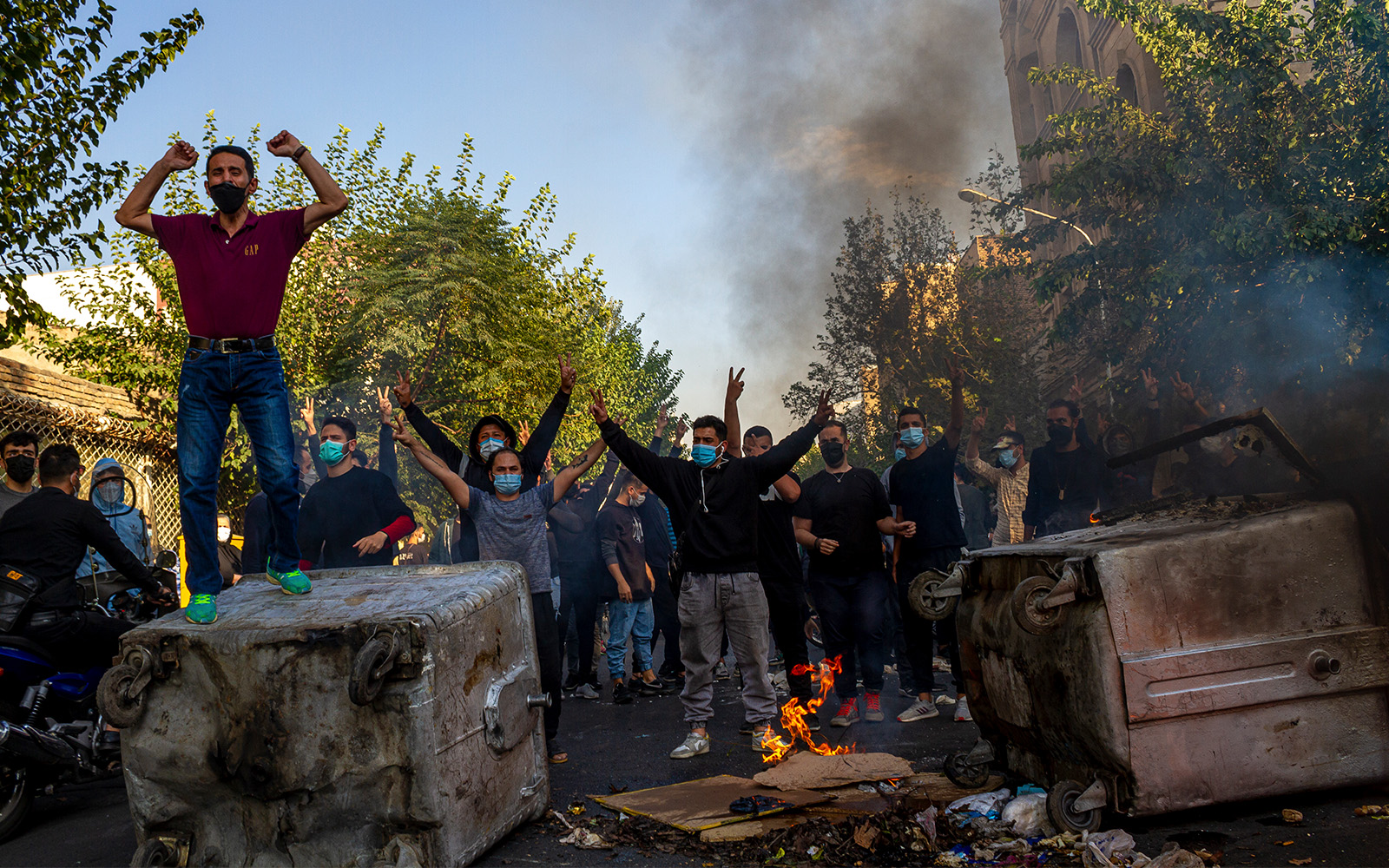 Iranians protest the death of 22-year-old Mahsa Amini after she was detained by the morality police, in Tehran, October 27, 2022. (AP Photo/Middle East Images, File)

“The threat of execution will not suffocate the will for freedom,” she tweeted, decrying the “perfidious summary trial.”

Germany also summoned the Iranian ambassador, a diplomatic source said later on Thursday, but did not provide any further details about the summoning.

UK Foreign Secretary James Cleverly expressed outrage and urged the world not to ignore “the abhorrent violence committed by the Iranian regime against its own people.”

The office of the UN High Commissioner for Human Rights said “we deplore [the] hanging of” Shekari.

The court in Tehran heard Shekari had been arrested after striking the member of the Basij paramilitary force in the shoulder with the blade. The injury required 13 stitches, Mizan Online said. 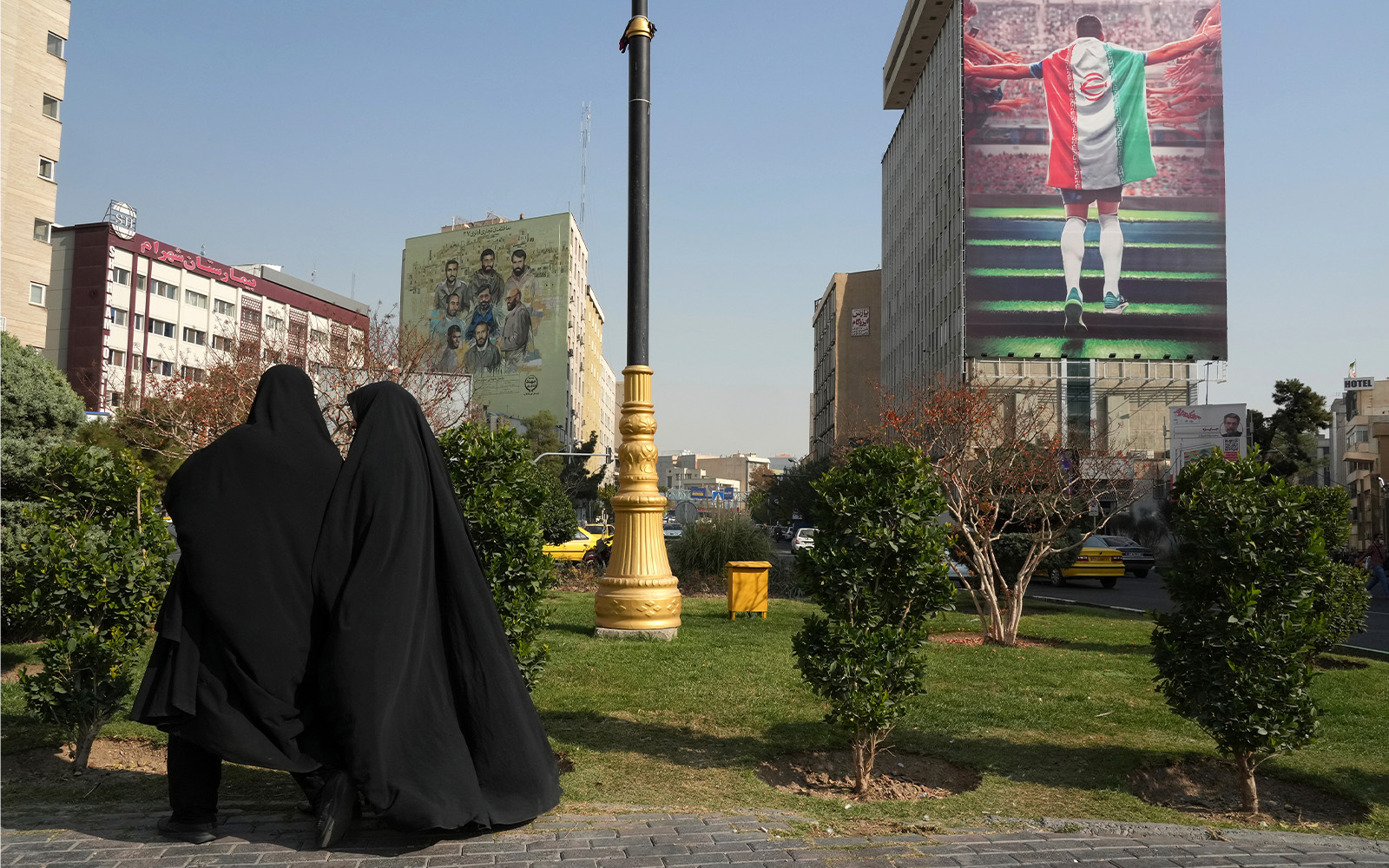 The Basij is a state-sanctioned volunteer force that is linked to Iran’s powerful Islamic Revolutionary Guard Corps, designated a terror group by the US.

It added that he appealed but the supreme court upheld the ruling on November 20.

According to Amnesty, Iran executes more people annually than any nation other than China.

IHR this week said Iran had already executed more than 500 people in 2022, a sharp jump on last year’s figure.

The 1500tasvir protest monitor said on social media that the execution of Shekari had happened with such haste that his family had still been waiting to hear the outcome of the appeal.

It posted harrowing footage of what it said was the moment his family found out the news outside their home in Tehran, with a woman doubled up in pain and grief, repeatedly screaming the word “Mohsen!”

Mohsen Shekari’s family receiving the unexpected news of his execution by the Islamic Republic while they were still waiting for an appeal.
Since this morning, they have still not been able to even receive his dead body from these monsters.#MahsaAminipic.twitter.com/UWGgfDrzUU

The freedom of expression group Article 19 said urgent action was needed “as the lives of others on death row in relation to the uprising are in imminent danger.”

The largely peaceful protest movement has been marked by actions including removing and burning headscarves in the streets, chanting anti-government slogans and confronting the security forces.

In a relatively new tactic, protest supporters staged three days of nationwide strikes up to Wednesday which closed down shops in major cities, according to rights groups.

The security forces have responded with a crackdown that has killed at least 458 people, including 63 children, according to an updated death toll issued by IHR on Wednesday.

Doctors and nurses who have been treating wounded protesters told The Guardian that Iranian security forces are firing shotguns at women’s faces, breasts and genitals.

The medical professionals are treating the demonstrators in secret to avoid repercussions, and have noticed that women and men tend to suffer different injuries at the protests. The men are usually injured in the legs, buttocks and backs, the Thursday report said.

The security forces are firing small birdshot pellets at the demonstrators at close range, causing the projectiles to embed deep in their flesh. The doctors and nurses said some of the injuries will cause permanent damage, including to the eyes of many women, men and children. Hundreds of protesters have reportedly lost their eyesight.

A court on Tuesday sentenced five more people to death by hanging for killing a Basij member, bringing to 11 the number sentenced to death in connection with the protests.

Times of Israel staff contributed to this report.