GENEVA (AP) — Political issues are swirling around the Iran men’s soccer team amid turmoil on the streets at home just weeks before the World Cup where it will play the United States, Wales and England.

At home in Iran, two weeks of demonstrations and a violent crackdown by state authorities have followed the death of a 22-year-old woman, Mahsa Amini, in the custody of the morality police. She had been detained for allegedly wearing a mandatory headscarf too loosely.

Players made their silent protest at a World Cup warmup game this week, where the Iranian soccer federation tried to silence fans by locking them out of the stadium in Austria.

The federation also tried this month to organize a warmup game in November with Russia, Iran’s military ally whose teams are pariahs in soccer since the invasion of Ukraine.

FIFA was urged Friday by long-time campaigners for the rights of women fans to attend games in Iran to expel the national team from the World Cup.

“The Islamic Republic’s authorities and its football federation must not be given the honor of participating in football’s finest tournament while it is killing its citizens on our streets,” the Open Stadiums group said.

Open Stadiums called on FIFA to uphold its statutory commitment to respect and strive to promote “all internationally recognized human rights.”

Soccer’s governing body did not immediately comment on the fans’ request.

FIFA already did expel Russia from this World Cup — imposing a ban before a European qualifying playoffs semifinal in March against Poland — though without invoking human rights reasons. Instead, FIFA cited “irreparable and chaotic” harm to the World Cup due to security risks and potential opponents likely refusing to play Russia. 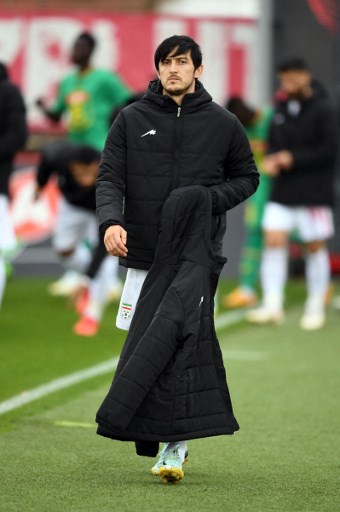 Iran’s forward Sardar Azmoun walks on the pitch prior the friendly football match between Senegal and Iran in Moedling, Austria on September 27, 2022. (JAKUB SUKUP / AFP)

Iran should certainly play at the World Cup in Qatar, its near neighbor across the Persian Gulf water, though the likelihood increased this week of political disruption for FIFA to deal with at the tournament starting Nov. 20.

Players have made their stand after being criticized for not reacting to Amini’s death days later at their first warmup game in Austria.

On Sunday, striker Sardar Azmoun wrote to his 4.9 million followers on Instagram that team rules prohibited comment “but I am no longer able to tolerate silence.”

He added being kicked out of the team would be “a small price to pay for even a single strand of Iranian women’s hair.”

A team-wide reaction followed Tuesday when the Iranian anthem played ahead of the game against Senegal.

Each player wore a wore a plain black jacket that covered up their national team badge.

Iran's soccer team wore black jackets to cover up their country's emblem during the national anthem. This is a huge statement of support for the protests in Iran and they're extremely brave for doing this. pic.twitter.com/yV1JBGB1I9

The game went ahead without fans in the stadium near Vienna, as the federation tried to stop demonstrators outside using a platform for dissent that would be seen on a live broadcast at home.

Star striker Mehdi Taremi later wrote on Instagram of being “ashamed” to see videos from Iran of violence against women in the streets. 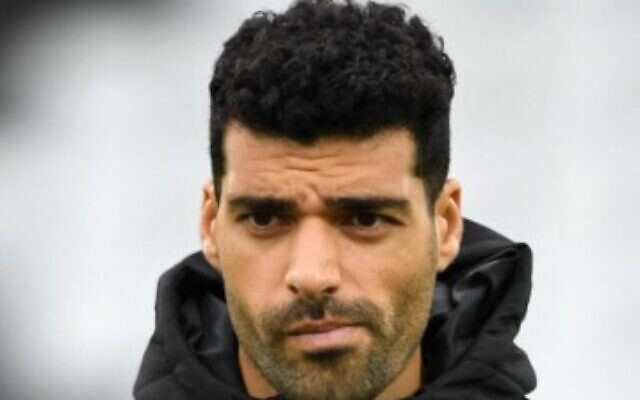 Iran’s forward Mehdi Taremi listens to the national anthem ahead the friendly football match between Senegal and Iran in Moedling, Austria on September 27, 2022. (JAKUB SUKUP / AFP)

Protesters in Iran have also targeted wider repression with some calls to overthrow the clerical establishment that has ruled Iran since its 1979 Islamic revolution.

Soccer was drawn closer into the Iranian turmoil in the same week FIFA president Gianni Infantino claimed progress for women’s fans there at a World Trade Organization event in Geneva.

“Women attend football games now in Iran which was not possible until a couple of (months) ago,” Infantino said Tuesday, when he also visited United Nations human rights officials hours before the Iran players’ protest in Austria.

Infantino’s claim was disputed by Open Stadiums which said “when the Islamic Republic pretended to open league matches for women, it was far from the equality FIFA’s own statutes require.”

“To begin with, very few women could buy tickets, then in a humiliating way got physically harassed by Iran’s morality police,” the activist group said.

The tension between FIFA and Iranian women fans is despite some success at the 2018 World Cup in Russia.

FIFA intervened four years ago to ensure fans could display their campaign banners in stadiums.

More cooperation could be called upon in Qatar, when Iran has a global audience to face England in just the second game of the tournament on Nov. 21.

Coach Carlos Queiroz’s team also faces Wales in Group B on Nov. 25 and four days later against the US.