A dream that started with Abraham, continued with Moses, and flourished through Herzl in the modern era continued today as two hundred and thirty people departed on a charter flight from New York’s JFK airport to Ben Gurion International Airport in Tel Aviv. Through Jewish National Fund-USA’s affiliate, Nefesh B’Nefesh, these modern-day pioneers are set to actualize the dream of returning home, something yearned for by previous generations for 2,000 years.

And on a shorter historical horizon, after two years of hiatus due to the pandemic, the charter flight is also celebrated as a return to a new normal.

Over the past 150 years, the aliyah (immigration to Israel) movement has seen Jews move to their ancestral homeland from all four corners of the globe in fulfillment of Jewish National Fund-USA founder, Theodor Herzl’s vision of a flourishing Jewish homeland. The stream of Jews coming home to Israel after two millennia of waiting is like water reshaping a rock over centuries: they have come in waves – like from 1948-1950 after the founding of the State of Israel and post-1967 following the Six Day War – and they have also come in trickles, but what’s most important is that the Jewish people have kept coming, steadily chiseling away at the crucible of exile. 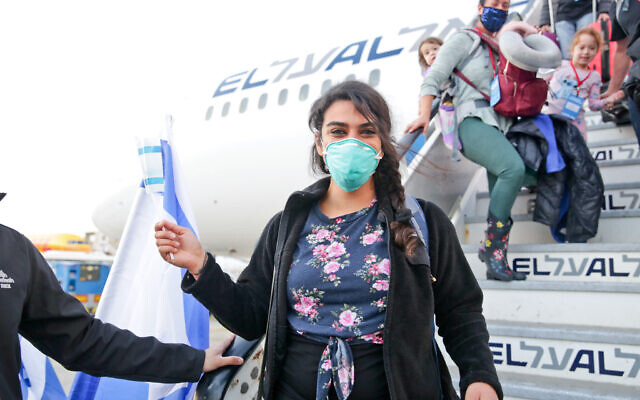 Jews used to arrive by land and sea, risking arduous journeys fraught with danger. It was often a one-way decision with no looking back, families and loved ones never to see or hear from each other again. Nowadays, aliyah is a mere 10-hour-or-less flight for most, and friends and family are but a video chat away.

Beyond the travel time, the immigration process is guided by Nefesh B’Nefesh staff dedicated to assisting olim (new immigrants) in making aliyah, while helping them navigate through financial, professional, and bureaucratic challenges.

Rose Barlow was inspired by her mother’s and brother’s dream of making aliyah.

“My mother, Freda Toker of blessed memory, dreamt of making aliyah but died at 53 with that dream unfulfilled,” said Rose. “In the 1980s, my brother made aliyah and lived in Israel for a decade. In my mother’s and brother’s case, an organization like Nefesh B’Nefesh would have made all the difference – helping my mom get there and keeping them both long-term!”

Rose has supported Jewish National Fund-USA for over a decade in various functions, from fundraising to Israel development to serving on boards.

“I grew up in South Africa in a Zionist family in a Zionist community and have always considered myself a Zionist,” she said.

Five years ago, Jewish National Fund-USA launched their Nefesh B’Nefesh task force to deepen ties between the two organizations and further their joint missions, and for Rose, it was a “no brainer for me to join.” 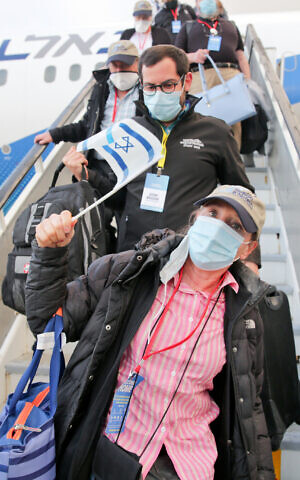 While many sought to keep their aliyah dreams alive, the pandemic served as a barrier for most. Flights were grounded, and aliyah hopefuls were forced to rearrange their plans, a situation made all the more real when the annual Nefesh B’Nefesh charter flight was canceled. When the skies finally reopened, complexities, restrictions, and surprises remained.

Still, the constant stream of aliyah pushed forward, and Nefesh B’Nefesh continued to steward olim through smaller group flights in 2020 and 2021. Even after all the grounded planes and uncertainty of COVID in 2020, that year only saw a slight decrease in aliyah. Then, owing to the worsening geo-political landscape and anti-Semitism around the globe, 2021 saw a record 25% surge in aliyah even with the charter flight remaining grounded.

Nefesh B’Nefesh has succeeded in continuing to shepherd Jews on their journey homeward. Still, the absence of the annual charter flight has diminished the yearly celebration of aliyah highlights.

“The charter flight is an amazing experience,” said Yael Katsman, Head of Communications at Nefesh B’Nefesh and the individual responsible for welcoming charter flights to Israel. “Hundreds of people making the same journey on a flight dedicated to them making aliyah. You get people from all walks of life – young, old, single, married with kids, religious, secular, lone soldiers. A plane filled with people flying to Israel all for the same purpose – to make a new life there. It’s fascinating.”

Adding to the excitement around this charter flight, the summer of 2022 marks the 20th anniversary since Rabbi Yehoshua Fass and Tony Gelbart founded Nefesh B’Nefesh. Since then, with the help of Jewish National Fund-USA, they have assisted nearly 75,000 Jews to make aliyah from North America.

And once they land in Israel, Jewish National Fund-USA’s philanthropic investments in the Negev and Galilee mean that those who choose to move to these communities will be met with world class medical centers, beautiful parks and playgrounds, employment opportunities, and access to affordable housing sites in addition to other amenities that have been developed to bring a high quality of life to Israel’s frontier regions.

For Jewish communities across the U.S., the relaunch of Nefesh B’Nefesh’s annual charter flight symbolizes a return to a new normal, yet it also represents something deeper – the unbreakable connection between Diaspora and Israeli Jewry and the continuation of the Zionist dream.

To support Jewish National Fund-USA, visit jnf.org/donate. For more information about joining one of the organization’s many Task Forces, visit jnf.org/taskforces.