A suspected hit attempt on a central highway earlier this week likely targeted a criminal underworld money launderer over a $145,000 debt, according to a preliminary investigation that also found that several coordinated teams erected a fake police roadblock to stop the target’s Lamborghini before assaulting him and another man who was with him.

Two residents of East Jerusalem, aged 46 and 31, were injured in the early Tuesday incident on Route 6 near Ben Shemen Interchange, one seriously and the other moderately. The assailants blocked their luxury car and beat them, after which a motorcyclist shot at them while they were being treated by medics.

Two residents of Ramle have been arrested, with a source familiar with the investigation telling Channel 12 news on Wednesday that “quite a few more arrests are expected, [there is] a double-digit number of suspects.”

Hebrew media outlets reported initial police findings that the target had been a man who serves as a money launderer for crime organizations and owns a garage for luxury vehicles. A year ago, he took a NIS 500,000 ($145,000) loan from a crime organization to pay off a debt. He allegedly bought a Lamborghini with the money and didn’t return the loan, sparking a dispute with the gang.

On one occasion, when members of the crime group arrived to demand the money, the money launderer’s associates stabbed one of them in the face, seriously injuring him, Channel 12 reported.

The crime group reportedly worked with several separate cells in this week’s assassination attempt, allegedly in a bid to mislead police. One team followed the target along Route 6 all the way from northern Israel to the center of the country, while communicating with a second team that put up a makeshift police checkpoint in the middle of the highway.

During the incident, many drivers believed it was a genuine police roadblock. When the target’s car stopped there, several cell members on motorcycles approached the car, opened its door and beat and stabbed the two passengers, then fled the scene. 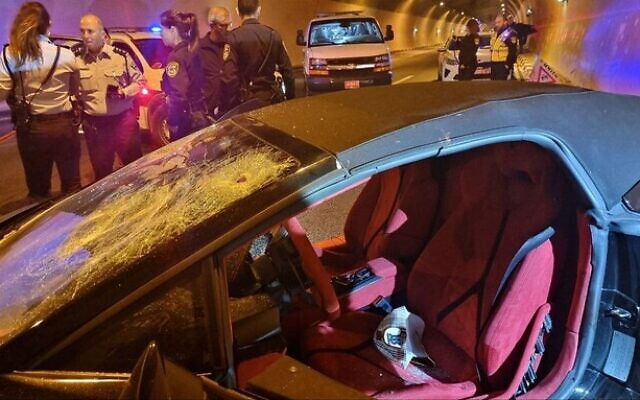 The scene of a suspected attempted murder on Route 6, near Ben Shemen Interchange, December 6, 2022. (Israel Police)

Later, while medics were treating the injured men, a third cell arrived and fired the gunshots, narrowly missing the medics, one of whom said a bullet passed between his legs.

A suspect arrested Tuesday night was named as 23-year-old Karem Abu Ghanem from Ramle. He has been remanded for eight days on suspicion of attempted murder and other offenses.

On Wednesday, the Ynet news site said a second suspect, a Ramle resident in his 30s, was arrested. He was reportedly spotted by a police drone with thermal imaging as he hid among trees in an orchard near the town of Mazkeret Batya.

Ahead of weekend rallies, Lapid and ex-defense officials warn against ‘regime change’

Alarm grows over health of hunger-striking dissident jailed by Iran